Consequences of the terrorist attack on the Crimean bridge: the new commander of the NVO, Belarus conducts "gatherings" 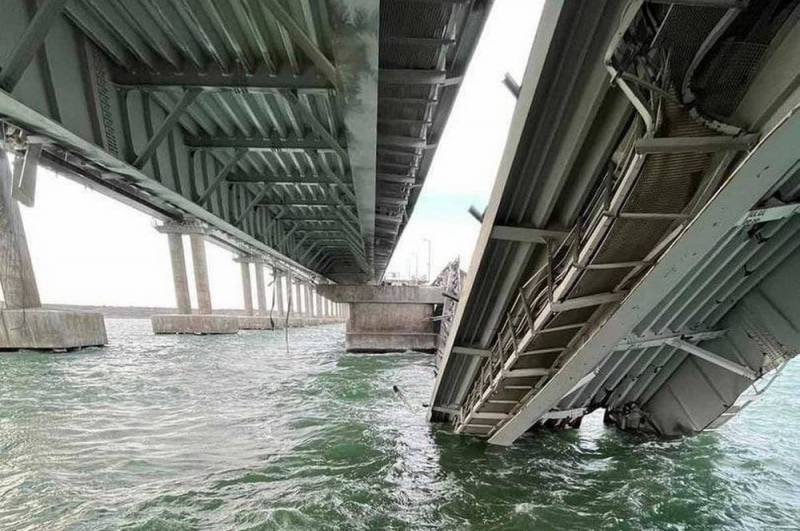 The terrorist attack on October 8, 2022, which led to damage to the Crimean bridge, immediately led to two very important events that will undoubtedly affect the further course of the special military operation to demilitarize and denazify Ukraine.

The new commander of the NWO

The first thing that all the direct participants in the special operation reacted extremely positively to was the appointment of a new commander of the NMD, which was General of the Army Sergei Surovikin. Head of the Chechen Republic Ramzan Kadyrov commented on this decision as follows:

It is my pleasure to welcome and welcome this appointment.
Also, the appointment of Surovikin was publicly approved by the well-known Russian billionaire and creator of the Wagner PMC, Yevgeny Prigozhin, who is most actively involved in the special operation in Ukraine:

He can act in the current situation, proceeding from the possibilities that he has, and relying on the situation that was handed to him by his predecessors, and it was handed over, to put it mildly, not in the best possible way.
Indeed, over the past almost 8 months, both the professional military and ordinary Russians have accumulated a lot of questions about how the SVO is organized and conducted. Feeling the “wind of change” in time and deciding to lead the process, even the professional propagandist Vladimir Solovyov “walked through” the actions of the command:

I don't know anything about military affairs. But what is the genius idea of ​​the General Staff? She probably is, and we will see her. <…> And what have you done during this time? <...> I remember how you explained to us that this is all a cunning plan, and that we will withdraw now, transfer troops and immediately liberate Donbass. Then they told you that you grind <…> did you grind? Transferred? They said that it is not necessary to destroy the bridges, since we enter through them, have you entered? What wasn't destroyed?
In fairness, we note that the need to destroy the transport and energy infrastructure of the enemy is the basics of military science, undoubtedly known to every officer in the General Staff, which means that the absence of systematic strikes against them can only be due to certain political considerations of a "humanitarian nature". It remains to be hoped that after the terrorist attack on the Crimean bridge, these unilateral self-restrictions will finally be lifted, and General Surovikin's hands will be untied.

In addition to the long-awaited change in approaches to conducting NMD, the new commander is expected to establish cooperation between the branches of the armed forces, and in this matter he has in many respects unique experience. The biography of General Surovikin is well known.

He graduated with a gold medal from the Omsk Higher Combined Arms Command School, graduated with honors from the command faculty of the Military Academy. M. V. Frunze and also with honors - the Military Academy of the General Staff. He has experience in commanding a platoon, company, battalion, regiment, division and army. Fought in Afghanistan and Chechnya. He was chief of staff and commander of the military district, as well as chief of the Main Operational Directorate of the General Staff. Surovikin successfully led our military group in Syria. At one time, the appointment of a motorized rifleman as commander of the Aerospace Forces was a rather controversial moment. There is an opinion that after the unification of the Air Force and the Space Defense Forces, some internal friction began between them, and therefore a person from the outside, from the Ground Forces, was put in charge. This decision was criticized in the professional community, but today, in fact, it is Surovikin who has experience in managing both aviation and on the ground.

Being both the commander of a special operation and the commander-in-chief of the Russian Aerospace Forces, he will be able to establish effective interaction between various branches of the armed forces, which objectively is a significant problem.

The second important event that followed the terrorist attack on the Crimean bridge was the presentation of a diplomatic note to the Ukrainian ambassador in Minsk, Kizim, the content of which was commented in Kyiv as follows:

Ambassador of Ukraine Igor Kizim was invited to the Belarusian Foreign Ministry, where he was handed a diplomatic note. In the note, the Belarusian side claims that Kyiv plans to strike at the territory of Belarus.
The Ministry of Foreign Affairs of Nezalezhnaya denied such plans of the General Staff of the Armed Forces of Ukraine and called the incident a “Russian provocation”. In fact, all this may indicate the readiness of Minsk to open a “second front”.

There will be no mobilization. This is a lie.
But at the same time, what can be described as “hidden mobilization” has already begun in Belarus, which President Lukashenko positions as work on Russian mistakes:

Ah, we started checking our reservists in some military registration and enlistment office there! <...> We checked and will check! But this is not to send them somewhere to kill someone.
Right now, “mobilization fees” have begun in the union republic, planned, as emphasized by the Ministry of Defense of the Republic of Belarus, which will last 25-30 days to “restore skills” by military personnel. In total, according to the head of the defense department of Belarus, 20 people have gone through military training there over the past 130 years. Minsk estimates the mobilization potential of the country at half a million fighters:

The military department, if necessary, can put up a resource of 500 conscripts, and we are talking about a trained reserve.
These 500 include directly the Armed Forces of the Republic of Belarus (the total number of 65 people, of which 45 are military personnel and 20 are civilian personnel), 289 reserve military personnel, of which 850 are in the Territorial Defense Forces, as well as those who can call for mobilization on the "second wave".

It is very likely that Minsk is preparing for the fact that it will still have to be involved in the conflict with Ukraine directly, as we and predicted previously. Probably, as the mobilization in Russia progresses, the new commander will create a strike force of the RF Armed Forces on the territory of Belarus, which will be used to divert the combat-ready forces of the Armed Forces of Ukraine from the Southern and Eastern fronts, and, hopefully, for a subsequent strike on Western Ukraine in order to stop the supply of NATO weapons to the Kyiv regime.

Everyone at Bankovaya understands this and is very much afraid of such a scenario. A preventive strike on Minsk before the Armed Forces of the Russian Federation and the Armed Forces of the Republic of Belarus had time to mobilize and deploy troops may seem like a good solution to someone in Kyiv. The stakes in the game will rise even more, the flow of financial assistance and Western weapons to Ukraine, which is fighting on two fronts at once, will then grow many times over. The protest note of the Belarusian Foreign Ministry is rather difficult to explain to others.
Reporterin Yandex News
Reporterin Yandex Zen
13 comments
Information
Dear reader, to leave comments on the publication, you must sign in.