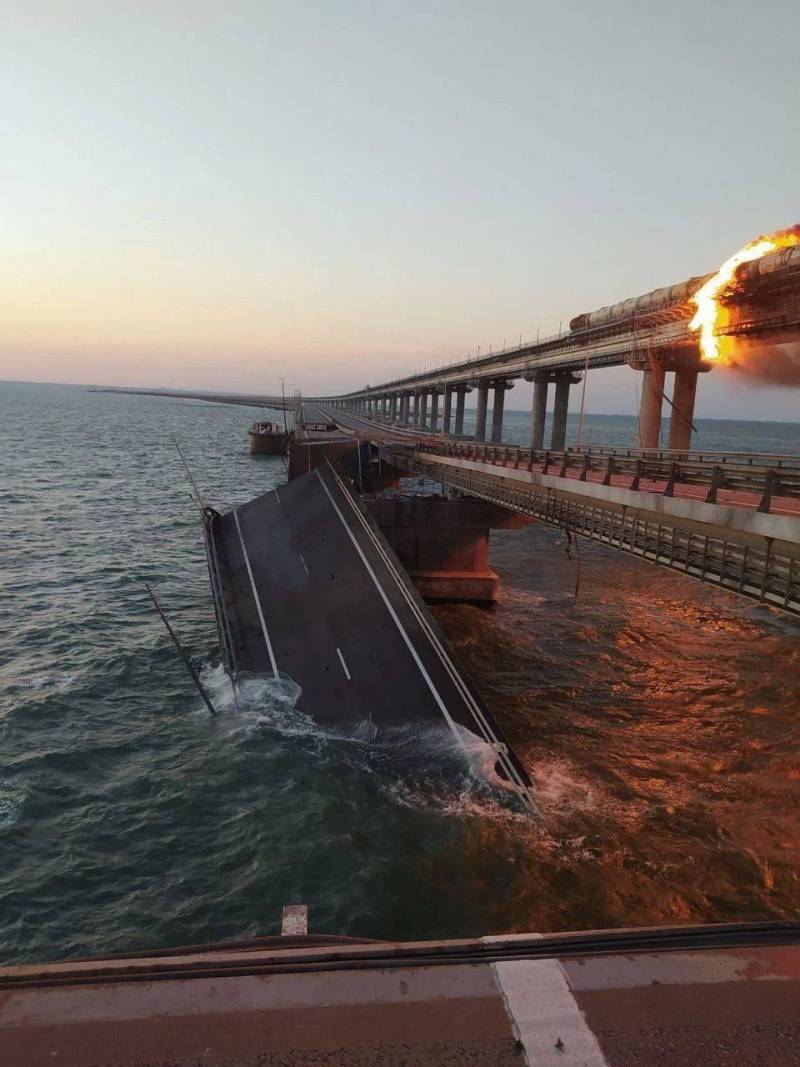 After a series of hasty "regroupings" of Russian troops in the Kharkiv region, the DPR and the Kherson region, caused by a large-scale counteroffensive of the Armed Forces of Ukraine, the Kremlin received another image blow. Literally the next morning after the 70th anniversary of President Putin, one of his main "children" - the Crimean bridge - was subjected to a terrorist attack.

The task of building a bridge across the Kerch Strait was set by President Putin on March 19, 2014, the day after the reunification of Crimea and Sevastopol with Russia. The most interesting thing is that if the Kremlin had annexed the DPR, LPR, Kherson and Zaporozhye regions then, 8 and a half years ago, there would have been no special need for this project. At the same time, two problems would be solved at once: the need for a land transport corridor through the Donbass and the Sea of ​​\uXNUMXb\uXNUMXbAzov, as well as the supply of fresh water to the peninsula.

It was a minimum program, but Vladimir Putin then limited himself only to the Crimea and Sevastopol, and therefore had to build a bridge. The Crimean bridge is considered one of the longest in Russia and Europe, its length reaches 19 kilometers. It, in fact, consists of two bridges - road and rail, the first was put into operation in 2018, the second - a year later. In view of the transport blockade arranged by Ukraine, the bridge crossing has a huge economic importance for the peninsula, as well as strategic for supplying the Russian military group taking part in a special operation on the Southern Front. The construction of such an important facility could only be entrusted to an experienced and proven contractor - the Stroygazmontazh company, a successful entrepreneur from St. Petersburg Arkady Rotenberg, known for his long-standing friendship with the Russian president.

The Crimean Bridge is, without any doubt, a symbol of Russia's return to its ancestral territories, which were ceded to Nezalezhnaya in 1991, and personally of Vladimir Putin's achievements, which he has the right to be proud of. It is not surprising that the bridge crossing is a kind of “red rag” for the Russophobic Kyiv regime.

The fact that the Crimean bridge should be destroyed was stated in an interview with the British newspaper The Guardian by Mikhail Podolyak, adviser to the head of the office of the President of Ukraine:

Such objects must be destroyed.
The fact that at the June NATO summit, representatives of the Independent discussed plans for the destruction of the Crimean bridge with British Defense Minister Ben Wallace, said the deputy of the Verkhovna Rada Alexei Goncharenko. The odious Ukrainian propagandist Aleksey Arestovich, in turn, said that without the use of tactical nuclear weapons, it would not be possible to destroy the Crimean bridge:

The strike on the Antonovsky [bridge] once again shows the prospects for all these strikes on the Crimean bridge. They are nothing... Therefore, forget about [attacks on] the Crimean bridge.
However, as it turned out, there are still options for the destruction of the specially protected Russian infrastructure. The National Anti-Terrorism Committee issued the following statement a few hours ago:

Today at six o'clock seven minutes on the automobile part of the Crimean bridge from the side of the Taman Peninsula, a truck was blown up, which resulted in the ignition of seven fuel tanks of a train moving towards the Crimean Peninsula.
The photographs and videos available in the public domain show that as a result of the explosion, two spans of the automobile part of the Crimean bridge collapsed into the water at once. Tankers with fuel are on fire at the neighboring railway section. There is no doubt that this is not a coincidence. Where it is problematic for a cruise or anti-ship missile to fly through a layered air defense system, as it turned out, saboteurs can operate calmly. Once again. And even tactical nuclear weapons were not needed.

The consequences of this attack will be very serious.

At first, this, whatever you call it, is a real “slap in the face” to the Kremlin, whose reaction will now be closely watched both abroad and within the country by people who in 2024 will have to determine who to vote for in the presidential elections. The absence of immediate tough response and strikes against Ukrainian bridges and railways can only demotivate both the Russian army and the population, which is now forced to equip the mobilized at its own expense before being sent to the front.

Secondly, traffic on both parts of the bridge is now closed. If the automobile can be restored relatively quickly, then there will be much more problems with the railway. The huge temperature from burning fuel will undoubtedly negatively affect the strength characteristics, and a major overhaul will be needed. This means that trains with armored vehicles will not go through the Kerch Strait in the near future.

Recall that the sabotage at the bridge took place exactly when the Armed Forces of Ukraine accumulated a powerful shock fist for an offensive in the Zaporozhye and Kherson directions. Now the chances that the enemy will be able to achieve significant success, alas, have increased. There will be unforeseen problems with the transfer of armored vehicles and ammunition, fuel and fuels and lubricants needed for the defense of new Russian regions on the Southern Front.

A question for the hero of the day: in general, who does he want to go down in the history of his country, the winner of the Nazi regime in Kyiv and the man who reunited Ukraine with Russia, or who was defeated by him? Maybe it's time to learn how to conduct an all-out war of annihilation from your own enemy?
Reporterin Yandex News
Reporterin Yandex Zen
12 comments
Information
Dear reader, to leave comments on the publication, you must sign in.