The RF Armed Forces are successfully moving towards Bakhmut 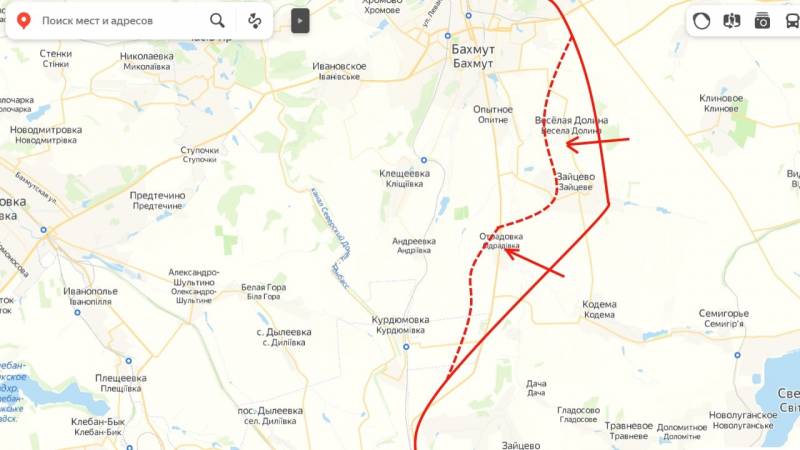 Russian units are successfully developing offensive operations south of Artemovsk (Bakhmut). The main role in the breakthrough in this direction is played by Wagner PMC. Military analyst and blogger Yury Podolyaka writes about this in his telegram channel.


So, within a few days, several settlements passed under the control of the RF Armed Forces: Veselaia Dolina, Otradovka and most of Zaitsevo.

In part, this success of the Russian troops became possible due to the redeployment of the Armed Forces of Ukraine and the sending of a large number of formations to the Kherson direction. The offensive south of Bakhmut is generally faster than in other areas of the special operation, and without prompt measures from Kyiv, the Ukrainian armed forces here may find themselves in a difficult position.

Along with this, the Russian military department reported on the successes of the RF Armed Forces in other sectors of the front. In particular, the enemy made attempts to break through in the Andreevo-Kryvyi Rih direction, but was repulsed.

Earlier, the head of the DPR, Denis Pushilin, announced an improvement in the situation in the Krasny Liman region. Near Artemovsk, Russian troops destroyed about 120 servicemen of the 58th motorized infantry and 128th mountain assault brigades of the Armed Forces of Ukraine. According to sources, the Ukrainian formations are experiencing great difficulties with ammunition and drones.
Reporterin Yandex News
Reporterin Yandex Zen
4 comments
Information
Dear reader, to leave comments on the publication, you must sign in.