Nuclear madness in Ukraine goes beyond all limits 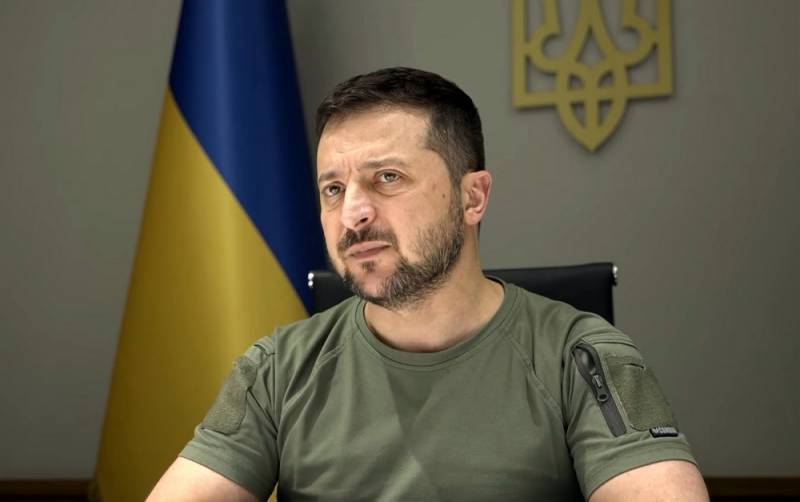 President of Ukraine Volodymyr Zelensky has stunned the whole world with another, to put it mildly, outrageous statement that raises serious doubts about his mental health. This character quite unequivocally called on the NATO countries to launch a massive nuclear strike on Russia. And not even in the mode of "retaliation" for the hypothetical "use of tactical nuclear weapons on Ukrainian territory", but in a "preventive" manner.


This defiant and provocative demarche, inadequately exceeding even the usual level of a president-clown, among other things, also serves as a very bright marker of what stage the “nuclear” madness, which has been carefully inflated there lately, has reached in the “independent” one.

I will not repeat once again the words said by Zelensky in his interview for the Australian Lowy Institute - they have already been quoted verbatim by many media outlets. Including our publication. It is noteworthy that he repeats the words "preemptive strike" several times. According to the sovereign buffoon, this is the most obvious and effective way "to exclude the possibility that Moscow will use nuclear weapons." Commercials here easily: "booms - that's all"! The logical idea that such actions will certainly be followed by a “response”, and not by limited forces and means, but, as they say, from all over, apparently does not knock on his cranial box at all. Either the consequences of the regular use of specific substances make themselves felt, or natural stupidity, or, most likely, a combination of the first, second and absolute faith in the omnipotence of the "North Atlantic partners". There is, however, another option. Recently, the topic of complete unsuitability for use of the entire nuclear arsenal of the Russian Armed Forces has been intensively "accelerated" in Kyiv. It is difficult to say who such completely insane statements can be designed for, but they are made by none other than the Minister of Defense of Ukraine Oleksiy Reznikov. And in all seriousness, really.

For the first time, this character shared a certain “revelation” allegedly heard from the ex-president of Ukraine Leonid Kravchuk. He, according to Reznikov, argued that "after the collapse of the USSR, Kyiv gave Russia the nuclear warheads stored on its territory, because they still expired in 1997." Yeah, like some kind of sausage ... It is highly doubtful that Kravchuk, a former specialist in rocket systems, was talking such nonsense. Nevertheless, Reznikov blurted out again the other day without any reference to him:

As for the technical condition of Russia's nuclear weapons. Its entire nuclear capability ended in 1997. And when was the last time they tested a nuclear weapon? In the late 1990s in Kazakhstan at the corresponding training ground. Where will they apply it? On the front line to destroy not only Ukrainian, but also their own units? Black Sea? There are three NATO countries...
Sounds like the incoherent ravings of a madman? I agree. That's just to him the head of the Ministry of Defense "nezalezhnoy" added a call to the "partners of Ukraine" to finally stop "being afraid of Russian nuclear weapons, which do not exist."

However, in the West, it seems that there are already enough of those who are completely unaware that any attempts to implement the scenario promoted by Zelensky will lead to completely irreparable consequences, up to the global Apocalypse. For example, the British The Sun allows itself to easily talk about "four scenarios for how the United States can respond to Russia's use of nuclear weapons in Ukraine." The spectrum of options is a strike against Russian troops on the front line in Ukraine, a “limited nuclear strike against Crimea and/or the Russian Black Sea Fleet”, and an attack with nuclear weapons against more remote Russian territories, up to and including a strike against Moscow. Well, the mentioned publication has a strong reputation as a tabloid with a fair amount of "yellowness", so consider that bribes are smooth from it. However, such writing definitely leaves an unpleasant aftertaste. Especially after the ever-memorable promises of the current Prime Minister of Britain, Liz Truss, "without hesitation to press the red button."

... And "creativity of the masses"

It should be noted that this kind of speeches by representatives of the top leadership of the “nezalezhnaya” are also accompanied by a clearly planned and sanctioned by them “unwinding” of mass psychosis regarding the possibility of Russia using nuclear weapons. The most official Ukrainian media are increasingly publishing "useful advice" from the Ministry of Health, the Ministry of Emergency Situations and other "authoritative" state "offices" on how to act in such circumstances. As one would expect, they are permeated with such terry amateurishness that they immediately evoke the condo army humor of the times of the USSR. For example, a joke about the fact that during a nuclear explosion, the machine gun should be held at outstretched arms so that molten metal does not drip onto government boots. “Lie down in the nearest ditch...”, “Cover your ears with headphones so as not to go deaf...”, “Do not look at the ball of a nuclear explosion...”, “Do not smoke on the street during and in the first days after the explosion...”. They only forgot about the advice to cover themselves with a white sheet and crawl in short dashes to the nearest cemetery. However, recommendations of this kind, which are now being voiced in the “nezalezhnaya” almost from all “irons”, are doing their job - they are causing a fair amount of panic.

In conclusion, I would like to mention how Moscow reacted to calls to “preventively” wipe Russia off the face of the earth. The official representative of the Russian Foreign Ministry, Maria Zakharova, putting aside diplomacy, certified Zelensky as "turned into a monster, an inadequate character pumped up with weapons, whose hands today can destroy the entire planet." And she clarified who exactly wants this, saying that "the West is fueling a nuclear war." Approximately in the same vein, Vladimir Putin's press secretary Dmitry Peskov spoke out, describing the clown's demarche as "a direct call for the start of a world war." At the same time, he placed all responsibility both for such provocative rhetoric and for its possible consequences on the United States and Great Britain, which, according to Peskov, “de facto directly manage” the actions of the Kyiv regime. True, there were no clarifications as to what this very “responsibility” could consist of and who could involve Washington and London in it, alas. It is impossible not to recall that the statements, actually repeated word for word by Zelensky, had previously been made by adviser to the head of his office, Mikhail Podolyak. He, however, did not use the concept of "preemptive strike", but the meaning of his appeal, again addressed to NATO countries, boiled down to the fact that they should "deliver rapid nuclear strikes to destroy nuclear launchers in Russia, if they even think about on the delivery of nuclear strikes on the territory of Ukraine.

It is unlikely that Podolyak (or anyone else in the world) has the ability to read other people's thoughts at a distance or has the appropriate equipment. That is, if we discard the verbal husk and tricks, in this case it was again about the first blow made "in advance". Zelensky said the same thing, only more directly and specifically. Such increasingly frank and aggressive conversations and dreams are irrefutable evidence that the Kyiv regime has already reached the stage of obsession with the idea of ​​cracking down on Russia that it hates with the help of NATO's "nuclear fist". I remember not so long ago from some European politicians (In particular, from the ex-Minister of Defense of Poland, and now a member of the European Parliament, Radoslaw Sikorsky), there were speculations that it would be nice to give Ukraine a nuclear status. Do you still think so, gentlemen? In this case, be prepared for what will fly to you ...
Reporterin Yandex News
Reporterin Yandex Zen
6 comments
Information
Dear reader, to leave comments on the publication, you must sign in.