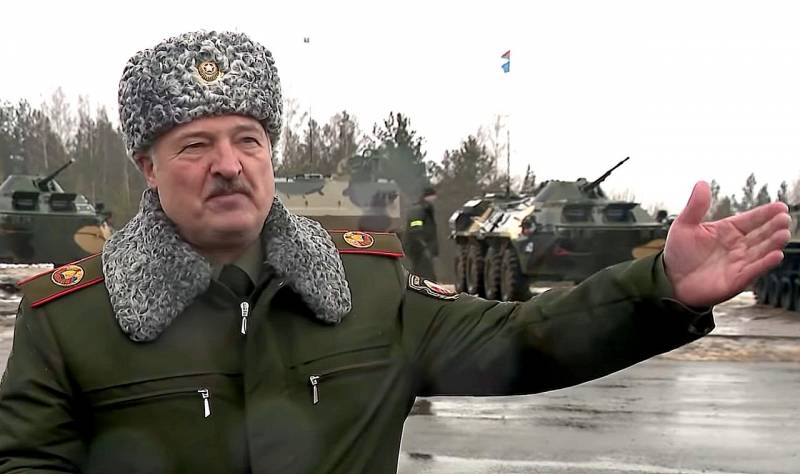 Due to its geographical location, Belarus is of exceptional importance for the RF Ministry of Defense in conducting a special military operation against Ukraine. It was from its territory that the Russian troops, concentrated there under the guise of exercises, made a swift march near Kyiv in the early days of the NMD. Is it possible to repeat a similar scenario in the future, taking into account the work on the bugs?


Union Belarus can interest us in two ways: as a springboard for the redeployment of a strike force aimed at northern Ukraine, and also as a direct participant in hostilities.

In itself, the strike of the Russian Armed Forces from the territory of Belarus on Kyiv, carried out in February 2022, was not without meaning. If enough forces were involved in this offensive operation, there were quite realistic chances to surround the Ukrainian capital and take it by storm, preventing reinforcements from approaching.

Alas, the Russian group allocated by the General Staff of the RF Armed Forces to fulfill these goals was categorically insufficient. Neither completely surrounded the Ukrainian capital, nor effectively stormed it was a real possibility. As a result, after heavy fighting in the suburbs of Kyiv, the RF Armed Forces received an order to leave the north of Nezalezhnaya and relocate to the Donbass, which, after a sabotage by the Armed Forces of Ukraine, was left without fresh water.

Like us celebrated earlier, the complete withdrawal of Russian troops from the Kyiv, Chernihiv and Sumy regions is a rather controversial decision. If the Ministry of Defense of the Russian Federation retained a foothold somewhere near the border with Belarus, which would serve as a reliable rear, our group could dig in there, create their own fortified areas, and “hang” over Kyiv, forcing the Armed Forces of Ukraine to keep large forces under the capital to parry a possible second strike. At the same time, sitting in deep defense, the RF Armed Forces could grind Ukrainian troops trying to attack their positions. Accordingly, the pressure of the Armed Forces of Ukraine on the Eastern and Southern fronts would decrease, which would be very useful now.

I would take Chernihiv and go no further, I would start digging in. Sumy is Ukrainian, and Chernihiv is Russian. When we left Chernigov this winter, people were on their knees, crying: “Why are you leaving?” But for those who are not waiting for us, "brothers" and "comrades", I would now make such a surprise ...

The Armed Forces of Ukraine threw everything on the offensive, they are still trying to put pressure on the Kherson region. They accumulate, creating a threat, and will do it all the time, because they have a working infrastructure in the Zaporozhye region. The Armed Forces of Ukraine in this case have the initiative. To intercept it, it is necessary to open a new direction, stretching the enemy's forces, counting on directions where the enemy does not expect a strike. Therefore, Chernihiv.
In addition to Chernigov, Western Ukraine can be of great interest to Russia, where you can enter simultaneously from the south, creating a bridgehead somewhere in the Odessa region, and from the north, from Western Belarus. Taking under the control of the RF Armed Forces the last sea gates of Kyiv and the western border, from where the Zelensky regime receives modern weapons, ammunition, fuel and fuel and lubricants, will automatically doom the Armed Forces of Ukraine to a strategic defeat. The only question is, what forces can try to do this?

Until a few weeks ago, all this was just a very bold fantasy, but after the start of partial mobilization in Russia, some realistic options loomed. Of course, no one is calling for the called-up reservists to be thrown into a meat grinder, on the contrary. The mobilized will be able to provide the RF Armed Forces with the strategic depth of defense of new Russian regions, and will also free up regular military personnel for active offensive operations. In addition, a few days ago, the country began the demobilization of more than a hundred thousand conscripts who managed to serve a year and shot their "three rounds", or even more. In no case does anyone call for conscripts to be thrown into battle, however, taking into account special circumstances, with their consent to serve the country a little longer, they could be redeployed to Belarus to conduct extraordinary large-scale military exercises together with the Armed Forces of the Republic of Belarus.

Why not? Belarus still participates in the NWO, which was directly confirmed by President Lukashenko:

As for our participation in the special military operation in Ukraine, we are participating there. We don't hide it. But we don't kill anyone. We don't send our military anywhere. We do not violate our obligations
The transfer of, say, up to fifty thousand Russian military personnel with armored vehicles to the border area with Ukraine will involuntarily force the General Staff of the Armed Forces of Ukraine to withdraw part of the combat-ready forces from the Eastern and Southern fronts near Kyiv, which will greatly help the RF Armed Forces and the NM LDNR in repelling a large-scale enemy offensive. Without an official declaration of war, conscripts cannot be allowed into battle, but no one has a 100% certainty that the Kremlin will ultimately not decide on this. As the mobilization progresses, the Russian group in Belarus will be reinforced with reservists, and conscripts who have served their time can be safely sent home.

The longer the special operation drags on, the higher the risk of bringing Polish troops into the territory of Western Ukraine. The Ministry of Defense of the Russian Federation should be able to quickly stop these actions of a member of the NATO bloc. Whether the Belarusian army will participate in the hostilities and why Minsk is conducting “covert mobilization”, we will talk separately.
Reporterin Yandex News
Reporterin Yandex Zen
5 comments
Information
Dear reader, to leave comments on the publication, you must sign in.