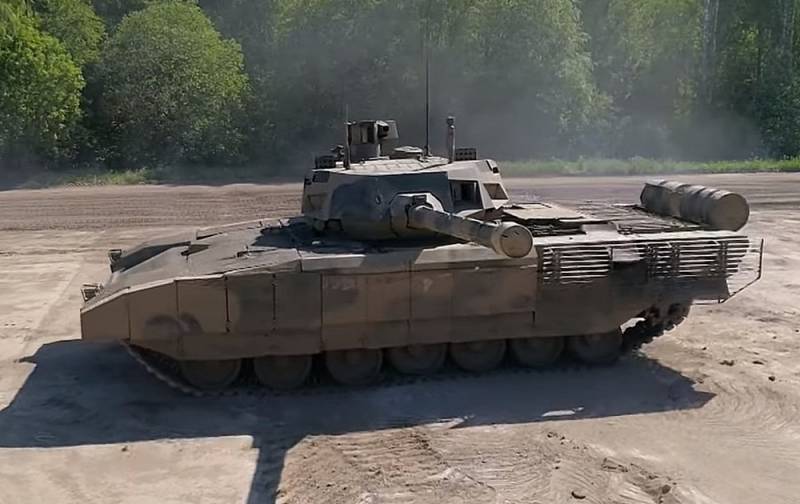 After the announcement of partial mobilization in Russia, a variety of videos about the training of the Russian army began to appear on the Web with greater frequency. For example, eyewitnesses published footage of tankers training on the T-14 Armata, which may indicate the plans of the military command to use the latest tanks during the NWO in Ukraine.


It should be noted that reliable evidence of the use of these MBTs with an uninhabited tower in the zone of the Russian special operation on Ukrainian territory has not yet been received. However, now there is a chance to see the T-14 "Armata" with active protection systems (KAZ) in real combat, and at the same time test them.

In the presented video, a heavy tracked combat vehicle moves around the territory of the training center. The video itself was filmed by Russian servicemen watching the movement of the "stealth tank". Clothing and surroundings indicate that the recording was made in autumn.


We remind you that the development of the T-14 "Armata" began in 2009, when Anatoly Serdyukov was the head of the Ministry of Defense, and in 2015 the tank was first shown to the public at the Victory Parade in Moscow (a pre-production batch of 20 tanks was produced). In the same 2015, the director of Uralvagonzavod, Oleg Sienko, said that the company received an order for the production of 2300 copies of the T-14 Armata until 2020, but in the event of a reduction in the military budget of the Russian Federation, the plan could be adjusted until 2025.

At the end of July 2018, Deputy Prime Minister for Defense Industry Yuri Borisov said that the promising Russian T-14 Armata tank was "too expensive for bulk purchases." In the second half of August 2018, speaking at the Army-2018 forum, Deputy Defense Minister Aleksey Krivoruchko said that the department had signed a contract for an initial batch of 132 T-14 and T-15 units (infantry fighting vehicles with tank armor and KAZ) on the platform "Armata", and the first 9 will go to the troops in 2018, and the entire contract will be completed before the end of 2021.

But the state tests of "Armata" began only in 2019, and in 2020 it became known that by 2027 they plan to supply only 500 units to the troops. A year later, in February 2021, Andrei Terlikov, general designer of the Ural Design Bureau of Transport Engineering (part of Uralvagonzavod), announced that serial deliveries of T-14s to Russian troops would begin in 2022.

State tests are underway, we expect them to be completed in the next year or two. Until the end of 2021, under one of the contracts, it is planned to supply an initial batch of machines. From 2022, we will reach stable serial deliveries
Terlikov clarified then.

It should be noted that the regular ammunition for the T-14 Armata of the Rosatom enterprises should have been prepared by the end of 2021. In addition, Uralvagonzavod is discussing with the Russian Ministry of Defense the issue of reducing production costs. Thus, today it is not known exactly how many units of the T-14 "Armata" the RF Armed Forces have.
Reporterin Yandex News
Reporterin Yandex Zen
18 comments
Information
Dear reader, to leave comments on the publication, you must sign in.