Kadyrov is not against the Mask: what is behind the appeals of the Chechen president and the American engineer 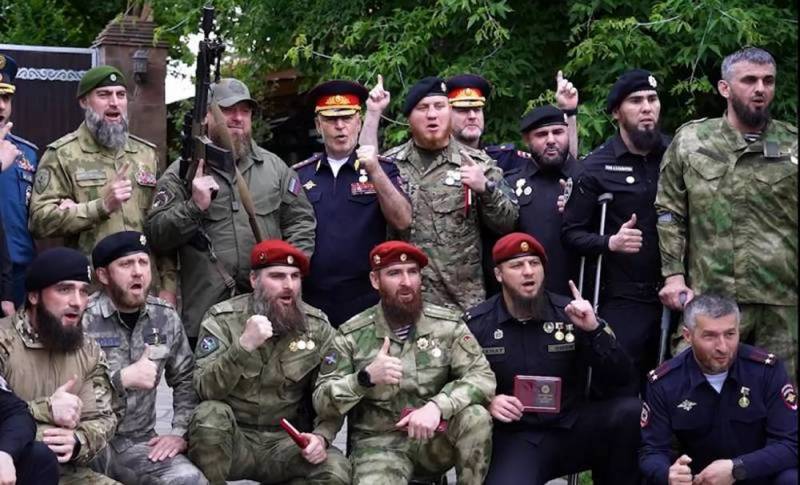 The month has just begun, and two “popular bloggers” have already managed to shake up the society with outrageous performances. On October 1, Ramzan Kadyrov spoke extremely harshly about the abandonment of Krasny Liman by our troops, criticizing the shortcomings of the operational and strategic command and the generally sluggish approach to conducting the NMD.


But Kadyrov is the hero of Russian social networks (and not only social networks), so that in the rest of the world his speech went unnoticed, especially since a local, bourgeois troublemaker was found. On October 3, Elon Musk rolled out a hypothetical plan for a peaceful settlement in Ukraine in his Twitter (a social network banned in the Russian Federation) in every sense. The radicalism of the idea goes off scale, because Musk proposed not only to withdraw Russian troops to the line on February 24, but also to leave Crimea for Russia, and if Donbass confirms the results of referendums under UN supervision, then include it in the Russian Federation.

Both performances made a lot of noise - and this is not surprising, because they are very symptomatic.

Now there is a struggle of endurance, Stirlitz

Both Kadyrov and Musk addressed the people against the backdrop of serious cataclysms. We know what things are going on here: seven months after the start of the military operation, the front clearly cracked at the seams, there was a threat of the actual loss of the territories that had just been legally returned to Russia. If this continues, then the successes of the campaign may, in fact, be nullified, and the victims may be in vain, which will subsequently lead to even greater casualties, primarily among the civilian population in the newly occupied lands by the Nazis. It is not surprising that on this basis, nervousness is growing in Russian society.

But on the "other side" everything, to put it mildly, is not very good. The population of Europe has already figured out and is receiving more and more confirmation that it is being openly leaked by the Americans and the Europeans walking under them.policy". At the same time, the latter, and the Americans themselves, are seriously concerned about the threat of a nuclear escalation of the Ukrainian conflict - judging by how often it is high-ranking officials who talk about it, they really are haunted by a terrible thought: what if HE still bangs?! In the masses, the Western media are fanning a real hysteria, sucking out the cause-and-effect relationships between anything and the nuclear apocalypse. literally from the finger.

In short, the atmosphere is not the most pleasant. “Suddenly” it turns out that everyone will have to pay for the actions (or inaction) of specific officials - even those who were great in their place. These are precisely, each in his own field, both Kadyrov and Musk (both not without reservations, but nonetheless).

Does this mean that their performances are evidence of a terrible annoyance or even a nervous breakdown? Partly yes, all living people have a tensile strength. However, people with a position of “guild decency” are fettered much more than others, and playing for the public is in a sense a “penultimate remedy” for them; therefore, there is no doubt that both truth-tellers first estimated their costs and aggravated deliberately.

Musk’s answer came almost immediately, and in the form of not only the rudeness of Zelensky and the former Ukrainian ambassador to Germany Melnyk, but also a ten percent drop in the value of Tesla shares. And given that the billionaire engineer-playboy philanthropist has previously spoken out in support of the “enemy of democracy” Trump, several “almost pro-Russian” messages may well result in full-scale harassment with real accusations of “working for Putin.”

However, only one thing can be said about the American political terrarium: the more and harder they squabble with each other, the better for us. It is much more interesting what Kadyrov’s demarche will result in, which was met with approval “below” (if only because the head of Chechnya, in fact, voiced the popular “how long ?!”), But “above” is ambiguous.

We don’t have Hindenburgs in reserve ... We could do it ourselves

The military department has two main claims against Kadyrov: what did he even dare to say and what exactly did he dare to say. The first claim is subsumed with nice-looking arguments that in the current “special military” time it is not appropriate to publicly say such things, because the enemy can use them in his propaganda, pass them off as a split in the Russian elites and so on and so forth...

Ukrainian propaganda has indeed already taken up this topic. However, a special emphasis is placed on the anti-Kadyrov motive: they say, he criticizes the generals, but he himself sabotaged the mobilization in his region, and does not meddle on the front line, and lives in luxury, and in general is not a good person. But stories about how Putin, the Defense Ministry and the General Staff are strenuously looking for someone to blame for the failures of recent weeks among themselves, how a certain “conspiracy of generals” is brewing against Putin, etc.

The culprits are really looking for. Defending itself from Kadyrov, the military department is trying to reduce his demarche to an unreasonable "attack" personally on Colonel-General Lapin, and the essence of the "attack" is to accuse Lapin of cowardice. There were many text and video messages from officers from the front in defense of Lapin, which emphasize that the general is always with his subordinates at the forefront.

But in fact, Kadyrov focused on completely different things:

In turn, I informed Valery Gerasimov, Chief of the General Staff of the Armed Forces of the Russian Federation, about the danger. But the general assured me that he had no doubts about Lapin's leadership talent and did not believe that a retreat was possible in Krasny Liman and its environs.
It's not a shame that Lapin is a mediocrity. And the fact that he is covered at the top by the leaders in the General Staff.
We must carry out NWO in the full sense of the word, and not flirt. Use every opportunity and every weapon to defend OUR territory.
In general, Kadyrov once again came out with harsh criticism of the "whole system" - not only the operational approach to the Ukrainian campaign, but also the strategy of "half-handed confrontation" with the West and, in fact, the entire concept and practice of building the Armed Forces that prevailed in recent years twenty. It is characteristic that, in general, he was supported by another "cult" leader of our military-political elite - the creator of PMC "Wagner" Prigozhin.

It has long been said that the format of the NMD did not really correspond to the realities on the ground, and that the top military-political leadership somehow reacted strangely to new factors. The bulk of the reproaches were addressed to the political elite of the country, headed by Putin himself, who, even against the backdrop of a frankly Russophobic smoky revelry, continued to play "nobility". Nullified attempts to implement the strategy of “grinding” enemy forces by all 146% (methodical air strikes in March-April, limited “rail war” in July, “end of the world” in September) and subsequent “goodwill gestures” were also attributed to the desire of politicians provide a "favorable negotiating position". The military, including the most senior ones, seemed to simply "do what they were ordered to do."

With the beginning of partial mobilization and the annexation of new territories, the government de facto acknowledged some of its mistakes of the previous seven months. It came (better late than never) the understanding that further military operations half a dozen would lead to failure, so you need to prepare large new forces for a long and methodical campaign to destroy the enemy.

Kadyrov, in his two high-profile public statements (the first was in September, hot on the heels of the "planned regrouping"), questioned the readiness of the military department ... in fact, for war. And it seems, not in vain - so many interesting things are happening in the background.

The two most negligently approached the mobilization of the regional military commissars (with suspicious-sounding names), Khabarovsk and Belgorod, stubbornly cover up from responsibility, one - with a transfer to another region, and the other - right on the spot. Swim up news about the “mysterious loss” of military uniforms for 1,5 million people. After leaving the Krasny Liman, rumors spread that the city was not prepared for defense by fortification (which is indirectly confirmed by military commander Kots: “Now defensive structures are being built in Svatovo, I have not seen this before”). “It turns out” that our units retreating under the onslaught of the Nazis in the south are manned by a third of the strength of the staff, or even less. Yes, and during the "parsing according to Lapin", according to Oleg Tsarev, some "wild facts" were revealed.

It is not difficult to understand why there is such a commotion at the top of the Ministry of Defense: the situation threatens mass, of course, not imprisonment, but dismissals from bread-and-butter positions. And if the same military correspondents, small people, you can try to shut up (and now there is a new round of the campaign against the "very talkative"), then this is not so easy to do with the president's entourage.

Unfortunately, although purges in the Moscow Region are clearly overdue, in the short term they (if they start at all) will not improve the situation on the fronts in any way. Enemy attacks on the LPR, Zaporozhye and Kherson region will have to be repulsed by the forces that already exist, at least for another 2-3 weeks, until the mobilized troops come to more or less acceptable conditions. Throwing them into battle right from a running start means losing them without any sense, so I would not want such a “brilliant” idea to imitators of violent activity. In a real way, the shortcomings of the summer and the failures of the fall can begin to be corrected no earlier than the winter of 2022-2023.
Reporterin Yandex News
Reporterin Yandex Zen
9 comments
Information
Dear reader, to leave comments on the publication, you must sign in.