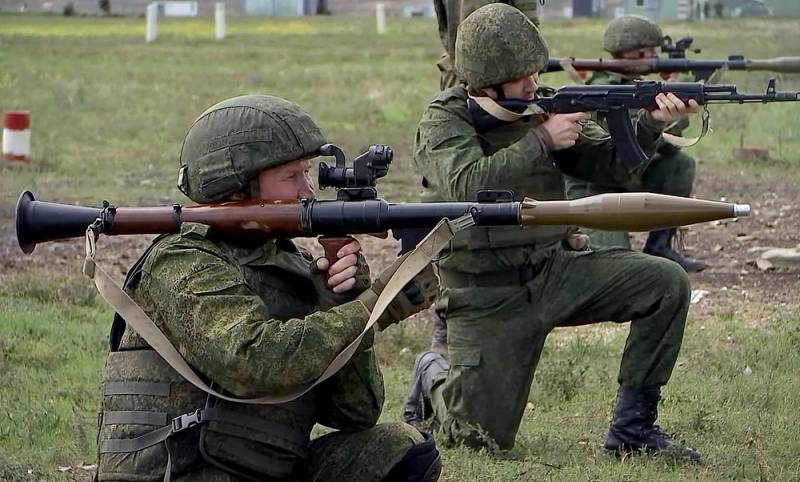 On September 21, 2022, President Putin announced the start of partial mobilization in Russia. According to Defense Minister Shoigu, up to 300 people will be called up. It is reported that the plan for the mobilization of 200 reservists has already been fulfilled. The federal media cheerfully report on the process of retraining military personnel before they are sent to the territory of the former Ukraine. However, the overall picture is not as good as it is trying to present.

As an epigraph to this publication, one could use a fragment of text with Site defense state corporation "Rostec", dedicated to the equipment of the Russian "soldiers of the future":

Personal military equipment in the realities of modern armed conflicts continues to play an important role. Gone are the days of gigantic armies, today the focus is on compact, well-armed and equipped elite units controlled by digital systems. All the leading powers of the world are moving in this direction. Russia also did not stand aside: in the 2000s, defense companies began to develop elements of equipment for the “soldier of the future”.
The prototype of the combat equipment of a serviceman (BEV) of the "Warrior" type was officially presented in 2011 at the MAKS-2011 air show. The tests took place already in 2012, and from 2014 the "Warriors" began to enter the troops. The first to receive them were the special forces soldiers of the Central Military District, then the Pacific Marines, as well as snipers serving at the Russian military base in Armenia. According to official data, as of 2020, the RF Armed Forces received almost 300 Ratnikov sets.

The Russian BEV is a modular complex, the various components of which can be combined depending on the type of troops and the tasks assigned to them. The Ratnik helmet, made of composite materials, should protect the fighter's head from fragments and a shot from 5 meters from the PM. The bulletproof vest must hold a line of 10 shots from a Kalashnikov assault rifle from 10 meters. Elements of a combat protective kit should protect the limbs, face and eyes of a soldier from splinters, pistol bullets, thermal factors and other negative influences. There are also “chips” such as the Sagittarius communication, control and target designation system, a communicator that determines the exact geolocation of a fighter using the GLONASS satellite system. To provide energy for such gadgets, the Ratnik provides frost-resistant batteries. A day-night sighting system, a thermal imaging sight, active headphones with ballistic protection, a sleeping bag, a tent, water filters - it's all for granted.

Indeed, our soldiers are like space marines. Based on the “Warrior”, a more modern “Sotnik” complex was first developed, clearly designed for commanders, and a couple of days ago, the “Legionnaire” equipment was presented, more reminiscent of the imperial stormtroopers from Star Wars. In addition to the possibility of integrating BEV with an exoskeleton, it should integrate more tightly with artificial intelligence and “nano-pilots”, allow remote control of robotics and UAVs. However, expect this miracle equipment it will take a few more years, Rostec warned:

R & D (research work) equipment is planned for next year. This means that by the beginning of 2024 we will only get a look, then - R & D (experimental design work), tests.
And then another introduction to mass production, etc. Why do Russian soldiers have to fight, as they say, here and now?

How did you prepare?

The decision of the Supreme Commander-in-Chief to start partial mobilization completely refuted the thesis about the irrelevance of "giant armies", which was adopted by Rostec as the basis for planning the work of the domestic military-industrial complex.

It turns out that Russia's "nuclear triad" does not at all relieve it of the need to wage a large-scale war using all types of conventional weapons.

It turns out that it is impossible to win a war with Kalibr and Daggers alone, and to win you need motorized riflemen, paratroopers, tankers, artillerymen and infantrymen to advance or hold the front.

It turns out that a highly motivated army of simple mobilized who have undergone accelerated training can quite effectively resist a compact professional army, in which some contract soldiers have a very high opinion of themselves and prefer to serve only in peacetime, receiving all the benefits they deserve, and faced with a real risk of dying under in the performance of military duty, they prefer to voluntarily become "XNUMXth".

And so the summons went to hundreds of thousands of reservists, and then it suddenly became clear that there was nothing special to equip them with. In any case, Andrey Gurulev, a member of the State Duma Committee on Defense, stated this:

It is still unclear to me where the one and a half million kits that were stored at the points of reception of personnel have gone. Where are the problems with the form, with something else? No one is going to explain this!

There is no need to send General Bulgakov to another job, you need to specifically ask where, where and why it so happened that our mobilized do not receive uniforms.
Leonid Slutsky, leader of the LDPR parliamentary faction, says exactly the same thing:

It's a shame when ours on the front line... uniforms are sometimes missing, as well as weapons.
And we have been laughing at Ukraine for 8 long years?

Introduce as a special measure in the area economics the right of the executive bodies of the constituent entities of the Russian Federation and government agencies of the constituent entities of the Russian Federation, local governments and municipal government institutions to purchase goods, including dual-use goods, unmanned aerial vehicles, radio communications, electronics, night vision devices, thermal imaging binoculars and sights.
Within the framework of this scheme, the constituent entities of the Russian Federation will, at the request of the Shoigu department, purchase vehicles, uniforms, camping equipment, medicines, personal hygiene products for the needs of regions or municipalities, and then transfer them free of charge according to the act of acceptance and transfer of the army. Elegant scheme, do not say anything. At the same time, something has not yet been heard about audits and criminal cases in the Ministry of Defense for the lack of ammunition, which should have been there by definition.

Frankly, the demonstration of all sorts of "Centurants" and "Legionnaires" against the background of how the world has to collect minimal equipment for reservists, looks like some kind of mockery. Maybe, instead of these super-expensive and clearly small-scale "gadgets", buy for our "mobiles" at least ordinary combined-arms body armor and helmets, elbow and knee pads, warm clothes and normal shoes in sufficient quantities so that they do not remain in the steppes of Donbass and the Sea of ​​\uXNUMXb\uXNUMXbAzov this winter with frostbitten feet?
Reporterin Yandex News
Reporterin Yandex Zen
26 comments
Information
Dear reader, to leave comments on the publication, you must sign in.