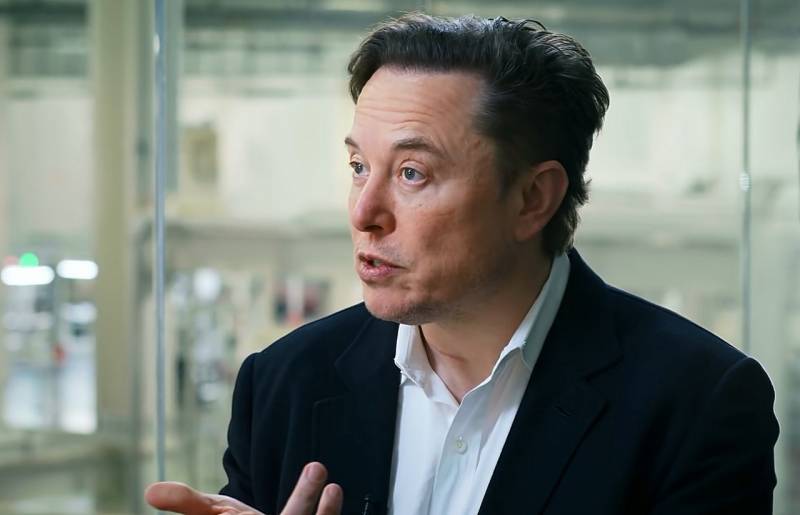 In the world information space, an unprecedented scandal has been raging for days in a row with one of the main public figures of a global scale - Elon Musk in the lead role, who decided to act as a "peacemaker" in the Ukrainian conflict. This story is perceived in different ways. Someone considers what is happening to be elementary trolling, undertaken for fun by a bored billionaire. Someone sees in his demarche specific political goals, moreover, related purely to the domestic American agenda. Well, the “interpretation” of Musk’s actions by the Ukrainian side is a separate conversation altogether…


Versions of a purely mundane nature are also in circulation - for example, regarding the fact that in such an exotic way the owner of one of the largest business empires on the planet is trying to simply divert attention from his problems. Nevertheless, with a more or less thoughtful analysis of both the “peace plan” put forward by Musk and the circumstances under which it was voiced, fundamental doubts begin to creep in that everything here is simple and obvious, as it seems.

"Does he still know how to talk?"

This was approximately the reaction of official Kyiv to the post published on Twitter (a social network blocked in Russia by the decision of Roskomnadzor for the dissemination of false information) the day before by the American billionaire Elon Musk, containing an initiative for a “peaceful settlement of the Ukrainian crisis”. You can even say - a completely full-fledged plan of such (albeit rather naive), the authorship of which belongs to just this character, whom a huge part of the inhabitants of the Earth considers the brightest genius of our time, and some - just a clever rogue. However, whoever Musk really was, he expressed quite sound thoughts. In his opinion, in order to stop hostilities and reach a consensus, it is necessary to officially recognize the belonging of the Crimea to Russia (which, as the billionaire recalls, owned it from 1783 until the very “Khrushchev’s mistake”). After that, ensure the normal water supply of the peninsula (and this is clearly addressed to Kyiv), and Ukraine once and for all fix its own “neutral status”.

As for those regions that have recently become part of Russia, Musk proposes, to be sure, to hold new referendums on this issue there, but already under the full control of the United Nations. And then - "as the people decide." It will be his will - "Russia must leave." Well, no - so what can you do? At the same time, the head of SpaceX also launched a vote among social network users for agreement with the scenario he proposed. It turned out very eloquently - at the time of the publication of the plan, it was supported by 52% of those who voted. Later, however, the proportion changed - but this is probably due to the fact that "orthodox" Ukrainians flooded the page en masse, burning with anger and thirsting for satisfaction.

What would you compare the reaction that Musk's tweet provoked directly in the "nezalezhnaya"? A hornet's nest, which was poked with a stick with all its might? No, that's not it... The overcrowded enclosure of the monkey house, where they threw the firecracker? Already closer, but still does not fully reflect. The best association is the result obtained from throwing a handful of carbide into a cesspool. In any case, in terms of the intensity and consistency of what was immediately splashed out both on Twitter itself and on all social networks and segments of the Internet available to the yellow-Blakyt "patriots". The degree of hate and the density of infamy literally roll over. For example, the ex-Ambassador of Ukraine to Germany, Andriy Melnyk, widely "famous" for his dirty language, swore at Musk twice in one evening. At the same time, in the second post, he “killed” the billionaire with the promise that from now on, not a single Ukrainian will buy “his fucking Tesla.” A terrible loss for the company. Irreplaceable…

In a friendly chorus of accusations of “working for the Kremlin” and “supporting Russia”, wild claims and nasty wishes, all representatives of the top of the Zelensky regime also merged - from the adviser to the head of his office, Podolyak, to the clown president himself. They tried to burn with a verb, but mostly smeared with feces. At the same time, competing in the density of spitting on Mask, these figures somehow instantly forgot that until recently they had praised him to the skies and were ready to kiss his shoes. And after all, there is a reason! From the very beginning of the NWO, Elon Musk not only took an unequivocal pro-Ukrainian position, but reinforced it with extremely weighty deeds. Less than 48 hours after the start of the special operation, Space X sent a “non-overlapping” batch of Starlink satellite kits “to strengthen the Internet network.” Over time, the number of such kits began to number in the thousands, and it is they who still provide uninterrupted communications for the Armed Forces of Ukraine, and also solve many other tasks for them. The transfer of Tesla Powerwall solar power plants was also carried out, providing a fairly reliable backup power in case the main grid fails. And yet…

That is how he called the richest man on Earth, who is a recognized leader in the development and implementation of "breakthrough" of technologies, echoing Zelensky, adviser to the head of his office Alexei Arestovich. Yes, an insignificant yap with a reputation as a noteworthy liar, which so “printed” the person of the year according to Time magazine, is something ... Here, by God, it’s tempting to give out the sacramental: “How do you like that, Elon Musk ?!” By the way, after all the tubs poured on him and whole Niagara slops, the billionaire remained completely calm and continued to explain to his opponents from Kyiv, who were pouring poisonous foam, that he, of course, “supports Ukraine” (without failing to remind that this support has allegedly already risen in his 80 million dollars), but, urging her to negotiate with Russia amicably (and on Moscow's terms), wants only to avoid "a huge number of deaths and a nuclear war, which further escalation may well lead to." He de believes that any attempts to resolve the situation by military means "will cause great harm to Ukraine, and possibly the whole world." Well, here Mr. Musk, of course, is being disingenuous - and to a great extent. He doesn't give a damn about Ukraine. The supply of Starlink there is, most likely, one of the manifestations of his not too hidden "special relationship" with the Pentagon and the CIA, which only the laziest did not talk about. And it is unlikely that he carried them out in reality on the basis of pure charity. Wrong character ... But the prospect of a nuclear war, which he sees as quite real, young, full of desires and plans, the billionaire does not give a damn at all. Well, he does not smile at all to spend the rest of his days in a bunker surrounded by radioactive wastelands - even if it is personal and very comfortable. Not for that he created his own business empire.

In any case, Musk is a very intelligent person, who knows how to count and “pump options”, which is why he writes:

Russia conducts partial mobilization. They will go for full military mobilization if Crimea is in danger. Death on both sides will be devastating. Russia has a population more than three times that of Ukraine, so a Ukrainian victory in an all-out war is unlikely. If you care about the people of Ukraine, look for peace!
People like him are not used to betting on known losers, and the billionaire considers the Kyiv regime exclusively in this category. And if so, then it is necessary to negotiate - and taking into account the position of the one who is obviously stronger. Nothing personal - just a desire to survive and continue your own business. I would very much like to believe that other “players” of Western business from the same “weight category” as Musk adhere to a similar position (or will come to it in the very near future). After the nuclear apocalypse (to which humanity is sliding steadily and at the same time faster and faster), the stock quotes of Tesla, Amazon and others like them are unlikely to remain at the same level. A joke, of course… Most likely, there will be no stock exchanges, no companies, no producers, no consumers. After the start of the NWO, the “collective West” sought to strangle Russia with sanctions precisely in the expectation that the “pillars” of the Russian business elite would rise up against it. The calculation did not materialize (at least not yet), but the “boomerang effect” seems to be working with might and main. For that fought for it and ran. Colossal military orders (of which the same Musk probably has a share) is, of course, wonderful. However, to a certain extent. Even if not a nuclear war - the deepest economic the crisis into which the Western world is plunging before our eyes is also completely out of the hands of its “best people”. You can't make a lot out of beggars.

What is quite characteristic, apart from a rabid flock of "dill patriots" of all levels, such as Podolyak, who is raving about the "demilitarization and denuclearization of Russia", only very small European mongrels began to bark at Musk. For example, the President of Lithuania Gitanas Nauseda or the Minister of Defense of the same "great power". Really serious people (especially in the US itself) prefer to keep deathly silence on this issue. And in the light of this (as well as taking into account certain connections and contacts of Musk), his publications on the social network (and in particular the voting polls accompanying each of them) can already be regarded as a banal “probing” of public opinion. By the way, you should not forget that the billionaire is an ardent supporter of the US Republican Party, which is about to go into the “last and decisive battle” against the Democrats who have already finally reported.

In a word, there can be many options, the scope for versions is great. In Moscow, of course, Musk's ideas were received with a great deal of favor. Dmitry Medvedev generally praised and promised to submit to the next rank ... Vladimir Putin's press secretary Dmitry Peskov, in turn, called the billionaire's proposals "unacceptable", but only in terms of holding repeated referendums. And so - very much even, according to him, "positively". It is clear that the “Musk plan” is not a plan at all, but only probing, searching for possible options for compromises and agreements, an attempt to outline some contours of the future world. Not too inspiring yet - but anything is better than the stubborn desire of some Western politicians to really fight with Russia to the last Ukrainian. Well, keep an eye on the development of the plot!
Reporterin Yandex News
Reporterin Yandex Zen
4 comments
Information
Dear reader, to leave comments on the publication, you must sign in.