Ukraine may join NATO in a confederate alliance with Poland 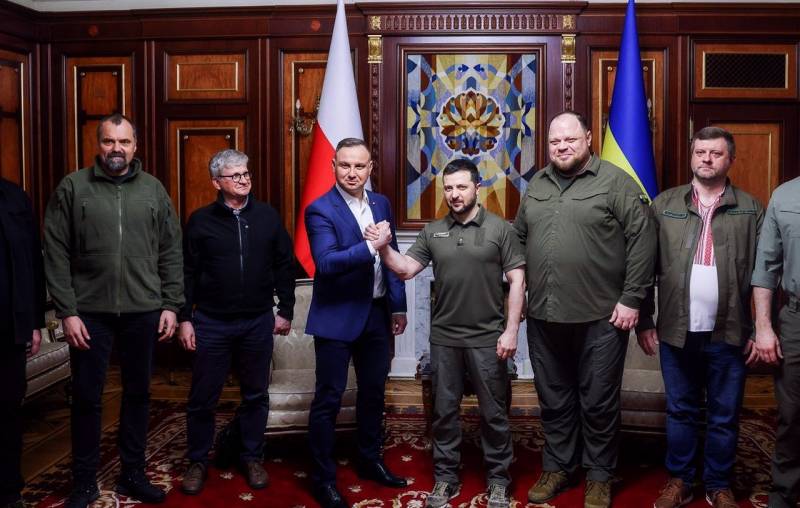 President Putin's historic decision to admit the DPR, LPR, Kherson and Zaporozhye regions to the Russian Federation following national referendums will have very serious and far-reaching consequences. On the one hand, Moscow took the Donbass and the Sea of ​​Azov legally under its protection. On the other hand, Kyiv refused further negotiations and applied for an accelerated entry of Ukraine into the NATO bloc. How can events develop further?

There will be no peace

During his speech on September 27, 2022, dedicated to the reunification of the four former regions of Ukraine with Russia, President Putin once again and, hopefully, the last, ritually called on the criminal Kyiv regime to sit down at the negotiating table. In response, President Zelensky said that any further negotiations with Moscow are possible only after the departure of Vladimir Putin, thus voicing a kind of "ultimatum" that was clearly addressed to a certain circle of people:

It is our state that has always offered Russia to agree on coexistence on equal, honest, worthy and fair terms. Obviously, with this Russian president, this is impossible. He does not know what dignity and honesty are. Therefore, we are ready for a dialogue with Russia, but with a different president of Russia.
Presumably, from the Russian fifth column, dreaming of the return of the coffee bun at the Vienna Opera and the water bus in London, and at any cost, "Western partners" are now waiting for some action.

Also, the military and ordinary Russians are waiting for the most decisive actions from the Supreme Commander-in-Chief, marveling at his inconsistency. Indeed, playing "Leopold the cat" while taking away one region of a neighboring sovereign country after another is rather strange. The “friendly Ukraine, but without Crimea” option did not work 8 years ago. “Peaceful Ukraine, but without Crimea, Donbass and the Sea of ​​Azov” will definitely not happen. This, in fact, was once again confirmed by President Zelensky, who immediately after Reunification sent an application for Ukraine to join the anti-Russian NATO military bloc under an accelerated procedure:

De facto, we have already passed our way to NATO. De facto, we have already proven compatibility with the standards of the North Atlantic Alliance. <...> De facto today Ukraine is applying to do this de jure. By a procedure that will be consistent with our value for the protection of our entire community. On an expedited basis. We are taking our defining step by signing Ukraine's application for accelerated accession to NATO.
An ambiguous reaction followed Kyiv's initiative as part of the North Atlantic Alliance. 8 countries included in the bloc have already spoken in favor: Romania, the Czech Republic, Estonia, Latvia, Lithuania, North Macedonia, Montenegro, Poland and Slovakia. The problem is that in order to accept a new member, all members of the alliance, without exception, must express their consent. It is believed that Hungary, which has a bunch of unresolved problems with Ukraine, will definitely be against it, as well as Turkey, which will start active trading in exchange for its vote. But soon Germany also expressed its negative attitude towards the reception of the Independent, and the motives of Berlin were explained by the country's permanent representative to the military bloc, Rüdiger Koenig:

Ukraine is not a NATO member. Therefore, there is no obligation for collective self-defence. <…> We also by no means want NATO to take an active part in hostilities.
It would seem that victory, again Putin outplayed everyone? In fact, everything is somewhat more complicated.

There are fears that Ukraine's accession to NATO will automatically entail the joining of the entire bloc to the war against Russia by virtue of Article 5 of the Charter of the alliance on collective defense. But let's take a closer look at what it says:

The Contracting Parties agree that an armed attack against one or more of them in Europe or North America shall be regarded as an attack against them as a whole, and therefore agree that in the event that such an armed attack occurs, each of which, in exercise of the right of individual or collective self-defence recognized by Article 51 of the Charter of the United Nations, shall render assistance to a Contracting Party or Contracting Parties so attacked by immediately taking such individual or collective action as it deems necessary, including the use of armed force forces in order to restore and subsequently maintain the security of the North Atlantic region.

Any such armed attack and all measures taken as a result of it are immediately reported to the Security Council. Such measures will cease when the Security Council takes the measures necessary to restore and maintain international peace and security.
Is it written here that the accession of an already belligerent country to the North Atlantic Alliance automatically entails obligations for its defense? Sorry, but an armed attack on a full member of NATO is one story, and an attempt by an already warring Ukraine to become a member of NATO in order to save itself is another story. Starting the special operation, Russia did not attack the North Atlantic Alliance, and Article 5 of the NATO Charter does not say anything about the possibility of using "retroactive force". In any case, if we proceed from the letter of the law.

It turns out that nothing good will shine for Ukraine in NATO, except for the role of being highly effective cannon fodder in a proxy war against Russia?

It seems that Kyiv still has the option of joining the alliance with one foot. This is the conclusion of a confederal treaty between Ukraine and Poland, which is part of the North Atlantic Alliance. The logic of the Trimorye geopolitical project requires Warsaw to return its Eastern Creses and, along with them, huge underground gas storage facilities in Western Ukraine. As a result, the Polish Army should go at least to Galicia and Volhynia, perhaps it will move even further on the Right Bank, based on the real successes or failures of the Russian army.

After that, the situation for us will become very complicated. Drawing Poland into the war against Russia on the side of Ukraine will automatically transfer the armed conflict to a fundamentally new level. There are no good options after that, only bad or very bad ones. In order to avoid such a scenario, the RF Armed Forces must build up a powerful strike fist in Belarus and, together with the Armed Forces of the Republic of Belarus, transfer military operations to Western Ukraine, cutting off the Kyiv regime from the supply of NATO weapons, ammunition, fuel and fuel and lubricants.
Reporterin Yandex News
Reporterin Yandex Zen
24 comments
Information
Dear reader, to leave comments on the publication, you must sign in.