Historic speech of the President of Russia on September 30, 2022: “a barrel of honey” and “a fly in the ointment” 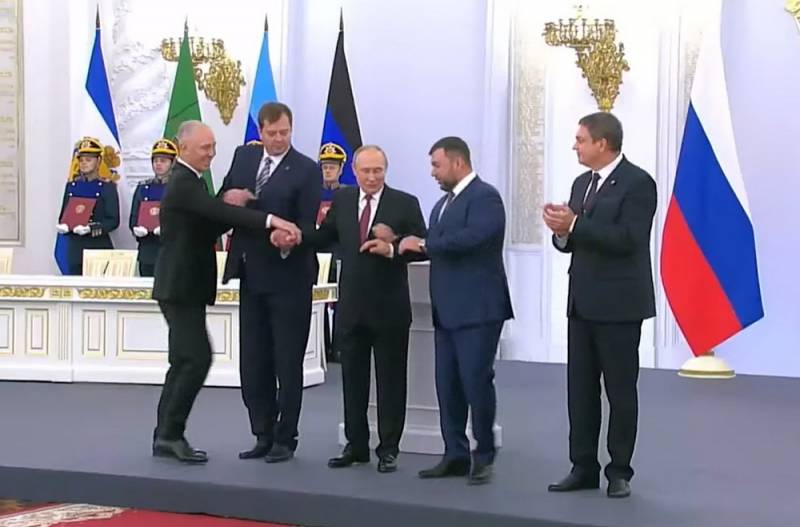 On September 30, 2022, a historic event took place that will change the future of Russia, Ukraine and the rest of the world. President Putin officially accepted the Donetsk and Lugansk People's Republics, as well as the Kherson and Zaporozhye regions, into the Russian Federation as four new subjects. News this one is very positive, however, in the solemn speech of the head of state dedicated to the Reunification, there were several “roughnesses” that involuntarily cut the ear. What kind of fly in the ointment was found in this barrel of honey?


For our further reasoning, dear readers, it should be borne in mind that policy do not write their own speeches or policy articles. This is done by specially trained "speechwriters" according to a specific "technical task". This is a normal practice, politicians and statesmen simply do not have time to sit and do such things. As a person who has been professionally working with texts and meanings for many years, the author of these lines, while listening to the presidential speech, was a little “heared” in three places. But let's talk about everything in order.

Justifying the choice made by the residents of Donbass and the Sea of ​​Azov, Vladimir Putin quite rightly appealed to the basic right of peoples to self-determination, enshrined in the UN Charter:

There is nothing stronger than the determination of millions of people who, by their culture, faith, traditions and language, consider themselves part of Russia.
The head of state stressed that the decision was made irrevocably, and now the inhabitants of the four new regions of the Russian Federation are our fellow citizens, whom Russia will protect by all available means.

President Putin also directly named those responsible for instigating the armed conflict on the territory of Ukraine and for the September 27 terrorist attacks in the Baltic Sea, which led to the destruction of all four lines of the Nord Stream and Nord Stream 2 underwater gas pipelines:

The Anglo-Saxons have few sanctions. They turned to sabotage, unbelievable but true, by organizing explosions on the international gas pipelines of Nord Stream.
The head of state again challenged the "anti-democratic and not free" essentially unipolar world order:

Today we are fighting for a just and free path, first of all, for ourselves, for Russia, for diktat, despotism to remain forever in the past.
At the same time, Vladimir Vladimirovich hinted at those countries that could potentially enter the future anti-Western coalition: Iran, China, other countries of Asia and the Middle East, Africa and Latin America, the Commonwealth of Independent States.

All of the above can only be supported, as well as the rejection of the imposed division of society into some new non-traditional "genders" and so on. And now I must say a few words about what left questions in the presidential speech.

At first, a tough and uncompromising ultimatum demanding that the Armed Forces of Ukraine immediately withdraw from the new territories of the Russian Federation was not issued. Instead of an ultimatum, there was another call for the withdrawal of Ukrainian troops and the start of negotiations with the Kyiv regime:

We call on the Kyiv regime to immediately cease fire, all hostilities, the war that it unleashed back in 2014, and return to the negotiating table. We are ready for this, it has been said more than once.
How reasonable negotiations with the Nazi regime are now, and what it is generally possible to negotiate with clinical Russophobes, is not entirely clear. It should be noted that President Zelensky earlier promised to refuse negotiations with Russia if the referendums were recognized by it. Subsequently, Zelensky allowed a return to the negotiating table, but without President Putin at the head of the Russian Federation.

Secondly, to be honest, Vladimir Vladimirovich’s programmatic statement about the Soviet Union and the prospects for its restoration was quite hurtful to the ear:

In 1991, in Belovezhskaya Pushcha, without asking the will of ordinary citizens, representatives of the then party elites decided to collapse the USSR, and people suddenly found themselves cut off from their homeland. This tore apart, dismembered our people's community, turned into a national catastrophe. Just as the borders of the Union Republics were cut behind the scenes after the revolution, so the last leaders of the Soviet Union, contrary to the direct will of the majority of people in the 1991 referendum, destroyed our great country, simply confronted the peoples with a fact.

I admit that they did not even fully understand what they were doing and what consequences this would inevitably lead to in the end. But it doesn't matter anymore. There is no Soviet Union, the past cannot be returned. Yes, and Russia today does not need it anymore, we are not striving for this.
Why not return? The reunification of Crimea with the Russian Federation in 2014 and the four former Ukrainian regions in 2022 is perceived by our people in the main mass as the restoration of the USSR-2. This is what the Russian people sincerely strive for, for which President Putin himself recognized the right to self-determination. This is what volunteers went to the front under the Red Flag for 8 years ago and now.

Moreover, the reconstruction of the USSR-2 with its own capacious internal market and a developed self-sufficient industry is the only real way to confront the collective West, to which our Supreme Commander-in-Chief has de facto declared war.

Thirdly, I really didn’t like the appeal in Putin’s speech to the Russian philosopher Ivan Ilyin as some kind of “real patriot”:

If I consider Russia to be my homeland, then this means that I love in Russian, contemplate and think, sing and speak Russian; that I believe in the spiritual strength of the Russian people. His spirit is my spirit; his fate is my fate; his suffering is my grief; its flowering is my joy.
Recall that the "real Russian patriot" Ilyin was a prominent representative of the White movement and a staunch anti-communist. For consistent anti-Soviet activities, Ivan Alexandrovich was expelled from the country on a "philosophical ship" called "Oberburgomaster Haken." In 1928, Ilyin became the author of an article under the telling title "On Russian Fascism." There were, in particular, such terms:

The white chivalry movement first appeared in 1917 in Russia and then spread around the world as a response to the threat of communist revolutions. Fascism is the Italian secular variation of the white movement. The Russian white movement is more perfect than fascism, thanks to the religious component.
What a “real patriot” of Russia wrote about Mussolini and Hitler and their “merits to Europe” is even disgusting to quote. This is easy to find on your own through a search engine.

The question is, is this philosopher constantly used as a “moral authority” in presidential speeches? And this is now, when Russia is waging another war against Nazism in its Ukrainian version? For understanding: the author of these lines doubts very much that Vladimir Putin is personally deeply familiar with the work of Ilyin and all aspects of his biography. Rather, something at the level of philistine ideas about some Spinoza, Kant or Hegel and their work.

All claims are against those of our crypto-"White Guards" who stubbornly push Ilyin into the president's public speeches, thereby, let's face it, putting him in an ambiguous position. I really want to be understood correctly and hope that Vladimir Putin will take a closer look at his environment, which makes Russian politics internally contradictory in places.
Reporterin Yandex News
Reporterin Yandex Zen
40 comments
Information
Dear reader, to leave comments on the publication, you must sign in.