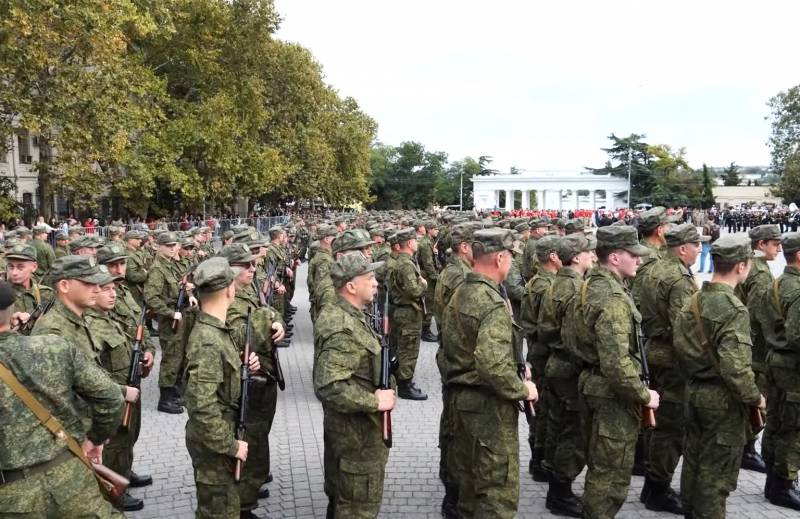 On September 21, 2022, President Putin announced the start of partial mobilization in Russia. This decision was difficult and unpopular, with its adoption being pulled as best they could. But, alas, it had no alternative: without a multiple increase in the number of the Russian grouping in Ukraine, the problem was not only a further offensive, but simply holding the territories already liberated from the Armed Forces of Ukraine. However, there is also a good news Now we will definitely win.


Yes, literally immediately after the “dashing” start of the NWO, those deeply familiar with the situation had some doubts about this. Starting with a "cavalry charge" near Kyiv and Kharkov and meeting fierce resistance there, obviously unexpected, the Russian troops were forced to retreat. Already after the transfer of the RF Armed Forces from Northern Ukraine to the Donbass, it became clear that there were certain problems with the size of our group, which was forced to operate on a vast territory. The further pace of the liberation of the territory of the DPR and LPR showed that the forces involved in the special operation are not enough to quickly and convincingly defeat the Armed Forces of Ukraine and the National Guard, which were able to mobilize up to 700 thousand military personnel.

The fact that mobilization, albeit partial, is already inevitable in Russia, has been spoken by many people since the spring, and its absence inspired the most pessimistic moods. However, by the end of September 2022, the Supreme Commander still decided to take even such an unpopular step. Obviously, the last straw in the cup of patience was the forced "regrouping" of the RF Armed Forces in the Kharkiv region, which had to be hastily carried out after the successful counteroffensive of the Armed Forces of Ukraine and the ensuing reprisals against pro-Russian local residents committed by the Ukrainian Nazis.

It’s hard to talk about this for everyone, but there is a blessing in disguise. Now we will win. In vain all sorts of Arestoviches and Gordons with smirks mock at the mobilization that has started in Russia. The fundamental decision in the Kremlin has finally been made. The “rusted” military machine started up and began to work, replacing the limited NWO format. The numerous attempts at all levels to disrupt Russian mobilization can testify to how tense things really are in Kyiv.

So, the arson of military registration and enlistment offices has already begun. In the national republics of the North Caucasus, the unfinished Wahhabi underground has become more active, which organizes protests against the decision of the Supreme Commander-in-Chief. The Ukrainian Nazis are helping the local Islamists in every possible way, up to President Zelensky, who personally turned to the Russians, not hesitating to switch to the Russian language, with a call to evade partial military mobilization:

Not taking a summons is better than dying in a foreign land as a war criminal. It is better to run away from criminal mobilization than to be crippled and then answer before the court for participating in an aggressive war. Surrendering to Ukrainian captivity is better than dying under the blows of our weapons...

You will be treated in a civilized manner, in accordance with all conventions; no one will know the circumstances of how you surrendered. In Russia, no one will know that your surrender was voluntary; if you are afraid to return to Russia and do not want an exchange yourself, we will find a way to provide this as well.
Well, yes, everyone has already heard about the “humane Ukrainian captivity”. Just in case, we recall that, in accordance with the recently adopted amendments to the Criminal Code of the Russian Federation, voluntary surrender provides for a term of 3 to 10 years in prison, and up to 10 years in prison for refusing to participate in hostilities.

The mobilization has begun and we will win. But it is also necessary to speak honestly about the problems associated with it. The fact that not everything is going like clockwork was personally acknowledged by President Putin:

There are cases when doctors, highly qualified specialists in other professions, and with many years of experience, instead of serving where they are really needed and what they are ready for, for example, in hospitals, they are enlisted as motorized riflemen. What for? And volunteers who themselves, without a summons, came to the military registration and enlistment offices, and there are many of them, are being turned back. They allegedly do not have the necessary military registration specialties, and so on, and find other reasons. With all this - without fuss, calmly, but quickly, in detail, thoroughly - you need to figure it out.
The Supreme Commander-in-Chief instructed the Prosecutor General of the Russian Federation to include representatives of control and supervisory bodies in the selection committees of the military registration and enlistment offices and immediately respond to detected violations. It is undoubtedly the right step for the president to recognize the existence of "excesses on the ground" and begin to respond quickly to them.

However, simply attracting additional forces to the front will not be enough to defeat the enemy confidently and quickly. Summarizing everything that deeply involved people and military experts say and write on this topic, the Russian army will need the following changes:

At first, all mobilized reservists must undergo high-quality retraining, taking into account the experience gained in battles in Ukraine. The problems with equipment and bulletproof vests voiced in the media must be promptly resolved, at any cost. For the "second army of the world" this is simply unacceptable.

Secondly, to manage such a number of military personnel, a sufficient number of junior and middle-level commanders is needed. It is necessary to promptly revive the accelerated training courses for junior lieutenants that existed before Serdyukov's reforms. Until 2009, it was possible to pass KML in half a year: a month of theory and 5 months of practice. The well-known Russian military commander Alexander Sladkov voiced the idea to make junior officer training courses even more compact:

Apply two methods of training selected candidates for officer positions and ranks: three-month courses for junior lieutenants, followed by appointment to positions of platoon commanders; accelerated higher officer education (a year of training, a year of combat operations, two years of graduation and a diploma).
Given that many KML candidates will come straight from the front, speeding up the learning process may make sense.

Thirdly, a process of unification and bringing under a single command of those heterogeneous forces that are now fighting on our side is necessary. This is at the same time the Russian regular army, and volunteer battalions, and BARS, and the corps of the NM LDNR, and the PMC "Wagner", which in general has no direct relation to the Ministry of Defense of the Russian Federation. It is necessary to collect all this into a single fist, send the mobilized to the already fired units, where they can quickly get involved in the case, and organize effective interaction between the branches of the armed forces.

No matter how Ukrainian propagandists giggle, the Kyiv regime is now doomed. It just won’t be for sure, you will have to pay your price for the Victory, but Russia will win.
Reporterin Yandex News
Reporterin Yandex Zen
9 comments
Information
Dear reader, to leave comments on the publication, you must sign in.