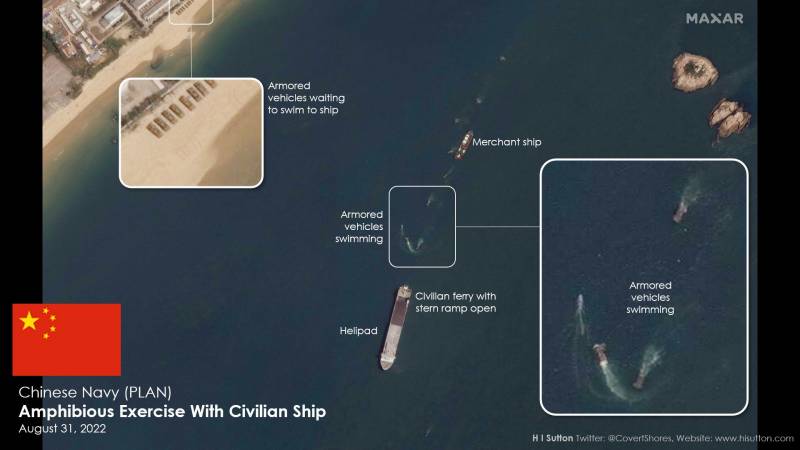 The People's Liberation Army of China (PLA) has given a massive demonstration of how its navy can use large modern civilian ferries for a massive amphibious invasion. Since this major exercise was taking place on the Chinese mainland near the Taiwan Strait, its potential target (landing Chinese troops on Taiwan) led the United States to monitor the situation from satellites with unconcealed apprehension.


The results of the analysis of satellite images of the PLA maneuvers have just been published by the website of the US Naval Institute USNI News. From these data, it follows that the Chinese Navy has deployed several large civilian ferries and warships in the open sea off the coast. The landing craft of the PLA quickly engaged in the transfer of military equipment on ferries and on board an amphibious transport ship at sea, using ramps for loading / unloading.

Military analyst Tom Shugart, who is tracking Chinese military exercises, noted that 7 dual-purpose civilian ferries were involved in the maneuvers. Among them, the latest type of ro-ro ferries (the so-called "RoRo", vehicles for transporting vehicles) built by the PRC, the Bo Hai Heng Tong, a multi-purpose cargo ship with a displacement of 15 tons, was identified.

The internal parking lane of this ferry has a width of 3 meters and a total length of about 2,5 km, distributed over three decks. That means the Chinese vehicle has nearly three times the payload capacity of a standard US Navy San Antonio-class (LPD) amphibious assault ship, Shugart said.

American LPDs, like LHAs (Lamphibious Helicopter Carriers), spend many cubic feet providing life and comfort for Marines, who can therefore work at sea for weeks or months. But these volumes can be considered wasted if the whole task is to make a quick raid across the strait
Shugart told USNI News.

The Bo Hai Heng Tong ro-ro ferry was released in 2020 and is not unique. At the same time and with the same characteristics in the PRC, its "brother" was built - the ship Bo Hai Heng Da. These ships are noticeably larger than most other ships in the same class. In addition, ships of the Bo Hai Heng type are actually multi-purpose, they were originally designed to carry various types of vehicles and containers, and the design of the vessel provides for equipping it with a large helipad.

True to their names, these ships usually operate in Bohai Bay, in the northwestern part of the Yellow Sea. To participate in the Bo Hai Heng Tong exercise, he sailed about 2000 km to the south, in order to quite quickly find himself opposite Taiwan.

The concept of resupplying amphibious assault ships with civilian ships and ships taken from trade has been practiced by the PLA Navy for many years. Most of these ships are used as transports, and some even carry artillery pieces on their decks to bombard the shore.
writes USNI News.

According to Shugart, the 26-ton ZTD-05 armored fighting vehicle presented in the maneuvers is a new development, first used by the PLA for a amphibious assault operation. Several warships from the PLA Navy also participated in the exercise: the Type 071 Wuzhishan (987) landing ship and older tank landing ships. All of them also practiced operations using armored vehicles.

USNI News recalled that these large-scale exercises of the PLA served as a response to a visit to Taiwan by Speaker of the US House of Representatives Nancy Pelosi. This visit was regarded as "provocative" not only in China, but also in many media around the world. Beijing then expectedly stepped up its military activity at sea and in the air around the island of Taiwan.
Reporterin Yandex News
Reporterin Yandex Zen
Information
Dear reader, to leave comments on the publication, you must sign in.