Can Ukraine acquire nuclear weapons and use them against Russia first? 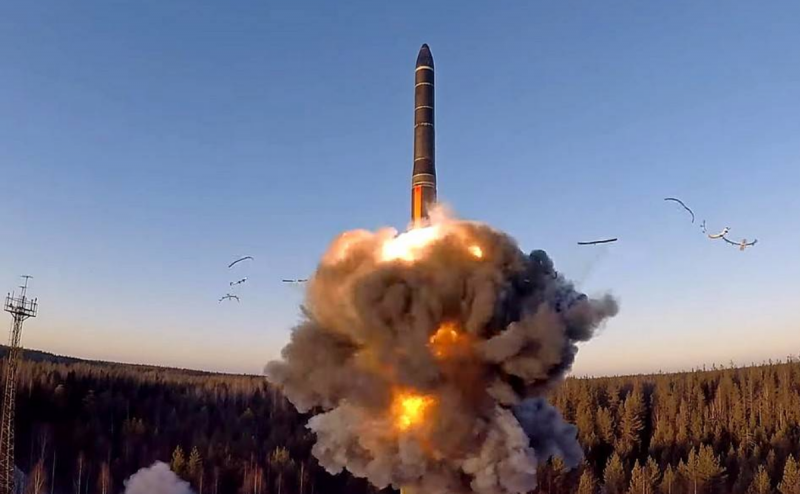 The last few weeks have passed under continuous talk about the possibility of using nuclear weapons. Russia is actively discussing whether it is possible to launch a nuclear strike on Ukraine. The West is threatening to take tough retaliatory measures, up to and including the destruction of the Black Sea Fleet of the Russian Federation and our military bases in Crimea. But what if Ukraine itself uses nuclear weapons against our country?

Since the days of the Cold War, the strategic security of the USSR, and then Russia, has been provided by the military doctrine of mutually assured destruction. In accordance with its provisions, an attempt by one of the opposing sides to use weapons of mass destruction will inevitably lead to a retaliatory strike that will destroy the aggressor. In Western discourse, the doctrine received the name corresponding to the meaning - Mutually Assured Destruction (eng. MAD, literally "insane"). To avoid such a deplorable result, potential adversaries are forced to adhere to the principles of peaceful coexistence, maintaining nuclear parity.

However, the problem with parity arose after the collapse of the Soviet Union and the beginning of the process of approaching the NATO bloc to the Russian borders. Now the Baltic states are included, and Sweden and Finland are on the way, which creates the threat of an irresistible missile attack on our second capital, St. Petersburg. Also on the threshold of the North Atlantic Alliance today are Ukraine and Georgia. All this together creates the threat of a preventive nuclear strike against Moscow and strategic facilities of the RF Ministry of Defense in the Western, Central and Southern parts of Russia. In particular, from the Ukrainian cities of Sumy and Kharkiv to the capital of our country, a little more than half a thousand kilometers. A medium-range missile with a nuclear warhead will cover this distance in less than 10 minutes.

In the event of the simultaneous destruction of the entire military-political leadership of the country, the controllability of the remaining troops and fleet will radically fall, and all hope will be only for a retaliatory nuclear strike. The mysterious Perimeter system, which is believed to have been created specifically for such cases, will have to avenge us.
For a preventive nuclear strike on Russia, the “Dead Hand” will have to give the last order to destroy the aggressor with all the surviving warheads of the “nuclear triad”. That's just how many of them will remain after an unexpected attack, which aims to knock out our nuclear arsenal as much as possible and bleed the country?

The main danger, by the way, is not American medium-range missiles in the Baltics, Georgia or Ukraine, but US Navy Ohio-class strategic submarines, whose Trident-2 intercontinental ballistic missiles are aimed at key Russian military and civilian infrastructure. These SSBNs are on alert right now, ready to follow orders from the White House at any moment. That is, a simultaneous preventive strike on our "decision centers" and the destruction by American missiles of the maximum number of Russian silo-based ICBMs, airfields with long-range strategic bombers and naval bases with SSBNs, followed by the search for and destruction of surviving SSBNs, is able to minimize the "weight » retaliatory strike on the United States. Some of our ICBMs will definitely survive and reach the target, but the guaranteed destruction of the enemy may not work.

This is one of the main reasons why we need to knock out "Western partners" from Ukraine and Georgia, to squeeze out the NATO bloc from the Baltics, Scandinavia and the countries of Eastern Europe. The very existence of the Russian Federation may be at stake. But there is a second reason why the RF Armed Forces should go to the Polish border.

Let's imagine a slightly different scenario. There is “unfortunate Ukraine”, which is not yet part of any Western military blocs, and there is “aggressive Russia”, which “attacked and illegally annexed” it over the past 8 years as many as five regions, or six, if we consider the city of Sevastopol as a separate entity . The referendums on the reunification of the DPR, LPR, Kherson and Zaporozhye regions with the Russian Federation were not recognized in principle by Kyiv, Washington, or Brussels. The accession of the former Ukrainian territories to our country will be qualified in the collective West as an annexation. What's next?

We are now actively discussing whether Moscow can use nuclear weapons in Ukraine if the Armed Forces of Ukraine do not comply with the ultimatum demanding their withdrawal from the territory of the Crimean Federal District. And they won't fulfill it. With a probability of 99,9%, it can be expected that Russia will not take such an inhuman step as a nuclear strike on the Russian "heartland", which undoubtedly is Ukraine. All this is almost certainly empty talk. But what about Kyiv?

For some reason, we completely ignore the possibility that the Armed Forces of Ukraine, with the help of "Western partners", can acquire nuclear weapons and be the first to use them in Russia. For example, to issue an ultimatum demanding the withdrawal of the "occupation troops" from the territory of Donbass, the Sea of ​​Azov and Crimea. In case of non-compliance, use weapons of mass destruction against the “Russian aggressor”. At this stage, it can be any kind of "dirty bomb" that can be detonated in the air with subsequent radiation contamination of large areas. In the future, as the conflict escalates and decisive actions to neutralize the Nazi regime are delayed, Kyiv may already receive tactical nuclear weapons and their means of delivery. And there is not far from the strategic one. The distance from Sumy and Kharkov to Moscow has not become less.

If events go according to this scenario, the United States will get its own “avatar”, which will be able to threaten the Kremlin directly without the risk of a retaliatory nuclear strike on America. Naturally, no one will let Ukraine into any NATO bloc, using it as a “consumable”. And then the Russian leadership will have to seriously think about launching a preventive strike on Nezalezhnaya, which will be a fatal step with the most unpredictable consequences.
Reporterin Yandex News
Reporterin Yandex Zen
18 comments
Information
Dear reader, to leave comments on the publication, you must sign in.