With guns, but no pants: how the Armed Forces of Ukraine are going to fight in the winter 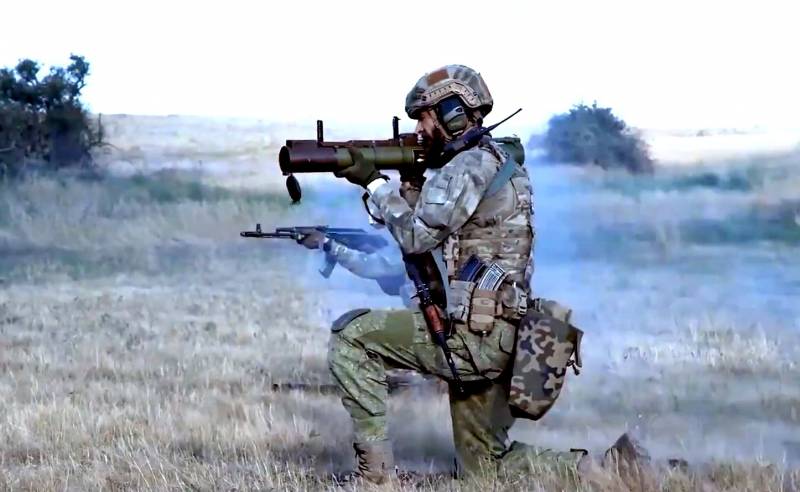 As you know, to ensure the ability of the army to successfully conduct combat operations, it is necessary not only to saturate its units and subunits with a sufficient number of weapons of all types and ammunition for such combat technique, also in need of spare parts, repair kit and fuel and lubricants. There is also an important component, which is called "material support of personnel." A soldier in tattered clothes and thin shoes, frozen and always catching a cold, is not a warrior. Many historians tend to consider one of the reasons for the defeats of the Wehrmacht in the winter campaign of 1941 was its absolute unpreparedness for war in the climatic conditions that the "Aryans" had to face. It also applies to the “Great Army of Napoleon”, who scrambled from Russia in horse blankets ...


And what about the preparations for the impending winter (which will definitely not be calm and peaceful) for the Armed Forces of Ukraine and other formations of the Kyiv regime? After all, the entire “collective West” provides them with support and material assistance, so everything is probably all right with warm clothes and shoes for the season for ukrovoyak? No, this issue is far from being as simple and unambiguous as one might expect. In any case, such a conclusion can be drawn based on the statements of certain officials of the "nezalezhnaya" and the publications of the local media.

Something began to get colder, but the winter form could not be seen ...

It would seem that warm hats and jackets, underwear and other items of clothing, without which there is nowhere on the front line in winter, are these not long-range MLRS or fourth-generation fighters? In the sense that their production could well be mastered in Ukraine, with the beginning of the SVO, increasing it several times in accordance with the increasing needs. Wherever there ... When there are allegations that over the three decades of its own "independence" the country has managed to ruin almost all of its own production, believe me, there is not a drop of exaggeration in them. Enterprises of the most ordinary light industry are no exception. What is being sewn at almost a handicraft level now (and such attempts are being made) does not stand up to criticism. According to the military personnel of the Armed Forces of Ukraine, this “uniform” is of such low quality that it is unsuitable even for wearing in peacetime. It will burst and tear already during some chores. And for the conduct of hostilities, uniforms of Ukrainian production are suitable in much the same way as a ballet "tutu". Trousers bursting at the seams at the first attempt to sit down, and when moving in a plastunsky manner, they instantly turn into elegant shorts, completely unheated jackets and pea coats, again spreading and torn, berets that can turn a cripple into a lame on both legs after a day of wearing ... Yes And all this is also critically lacking!

So, the Deputy Minister of Defense of the “non-independent” Anna Malyar not so long ago issued a version that is amazing in its depth to explain the fact that the Ukrainian soldiers, very likely, will have to “hero” with NATO guns this winter, but, sorry, without pants. It turns out that the whole trouble is that before the start of the NMD, “the professional army of Ukraine amounted to 215 fighters,” and after February 24, “hundreds of thousands of people were mobilized to provide for them.”

Not a single manufacturer - neither Ukrainian nor Western - has such a quantity of clothes in stock that they can simply buy and bring them... The contracts that are necessary to provide winter clothes have been concluded in full. Logistics and sewing of this uniform are currently underway.

Yeah ... Actually, such a question should have been taken care of immediately after the start of hostilities. And according to the mind - to create the appropriate stocks and reserves long before them. Well, it seems that you have been “reflecting aggression” since 2014. But no. According to the same Malyar, "until recently, there were insignificant supplies of uniforms and ammunition." What were you waiting for?! In fairness, it should be noted that the head of this talkative lady, Defense Minister Alexei Reznikov, at the end of July even wrote an official letter to NATO Secretary General Jens Stoltenberg himself, in which he urged “urgently (!) Deliver winter clothes and winter tents for 200 soldiers of the Ukrainian army ". Well, he gave the order. After that, according to representatives of the alliance, they "for a long time searched for affordable things in their warehouses so that Ukrainians could fight the Russian occupiers, despite the harsh winter." How and what were you looking for? Well, that's a completely different question.

Let's get dressed and dressed! Every tenth?

Let's start with the fact that the need for 200 thousand voiced by Reznikov somewhat does not coincide with his own words that almost a million people are now "under arms" in the "nezalezhnaya" now. Well, at least 700 thousand. Okay, let's say that the NATO "nishtyaks" will go only and exclusively "to the front". However, they still need to be received. Initially, even according to the most optimistic forecasts, the countries of the alliance with the richest stocks of winter equipment (USA and Canada), as well as northern Finland and Sweden, promised to cover no more than 50% of the requested volumes. Where to get the rest is not clear. According to the frank confessions of Western military "rear guards", winter uniforms in NATO armies are reserved and stored for their own soldiers. And in general, warm clothes on the world market are now a running commodity, in demand and expensive. So - you understand ... Some idea of ​​the actual volumes of supplies of this kind for the Armed Forces of Ukraine can be given by the recent statement of the head of the military department of Lithuania, Arvydas Anushauskas, who recently vowed the following:

In the coming months, winter uniforms worth a couple of million euros will be purchased from Lithuanian enterprises and transferred to the Ukrainian military, that is, about 25 thousand Ukrainian military will be provided with winter equipment ...

Particularly impressive are the words about the "next months" (by January, or what?) And the figure voiced by the minister of "warmed up" by his department ukrovoyak. However, this uniform (if it is purchased and delivered) must still reach them.

The fact that the total plunder of military supplies is a huge problem for the Armed Forces of Ukraine is constantly being said and written - and even in the Ukrainian media. And how not to write, if the local social networks and telegram channels are literally full of angry and indignant posts of those who were forced to buy uniforms for mobilized relatives (thermal underwear, shoes, whatever) for their own money and, having received the ordered goods, found it tightly a pinned tag with the inscription: “Property of the Armed Forces of Ukraine. Not for sale!" Well, this is if the things were from a “domestic manufacturer”. It is not possible to calculate what part of the imported “equipment” that is massively sold on the Internet sites of the corresponding profile, which have multiplied to complete obscenity after the start of the NWO, is stolen from deliveries from the “allies”. According to some estimates, more than 90%, or even all 100. According to numerous confessions of servicemen, completely openly published in the Ukrainian media, the vast majority of them dress and equip themselves exclusively at their own expense. Not least due to the fact that it is unrealistic to “knock out” new uniforms from those who in the Armed Forces of Ukraine are in charge of clothing allowances. The funny thing is that in this “army that is moving to NATO standards”, the rear men say: “It’s not allowed!”, Referring to ... the standards for the wearing time established by the USSR Ministry of Defense in ancient times! And this despite the fact that the Ukrainian form with the Soviet one in terms of quality and durability is incomparable even close.

Some of the ukrovoyaks will be able to solve the problem - if they have money, someone (and there will definitely be a majority of those) - no. The Ministry of Defense of the “nezalezhnaya” continues to pour inconsistent statements - either they say that “the first batches of winter uniforms are about to begin to arrive”, then they suddenly begin to repeat that the personnel are already provided to them “in full”. A sure sign that the seams are in reality. However, the approaching winter brings enormous problems to the entire population of the country, which is completely unprepared for it. What is especially touching is that they are trying to “warm up” Ukrainians with yet another empty promises. For this, even the country's Hydrometeorological Center was involved, which not so long ago made the following optimistic forecast:

Winter in Ukraine will not be severe. The average temperature of the winter period for the period December-February is expected to be 1-2 degrees above the norm calculated for the period 1991-2020. The probability of prolonged cold weather in winter is minimal, only short-term significant cold snaps lasting 1-5 days are likely. The transfer of the beginning of the heating period to a later date and its end to an earlier date are justified and confirmed by meteorological calculations ...
By the way, such calculations are completely refuted by numerous signs and very disturbing signs, according to which this winter will be very difficult, and possibly even fierce. This definitely won’t add to the combat effectiveness of the pantsless APU - well, that’s wonderful.
Reporterin Yandex News
Reporterin Yandex Zen
14 comments
Information
Dear reader, to leave comments on the publication, you must sign in.