"Banzai" in Persian: latest news on the use of Iranian UAVs 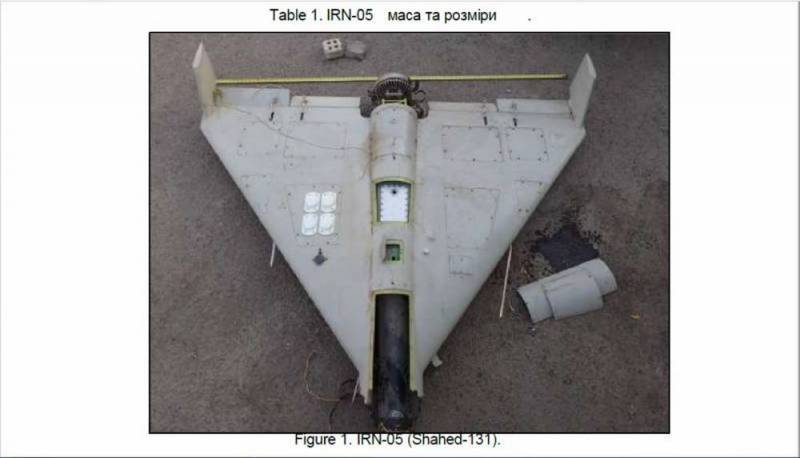 Literally a day after posting previous material on the burning topic of Iranian kamikaze drones, I got a report technical examination of the wreckage of Shahed-131 - the predecessor of Shahed-136, adopted by the Russian army under the designation "Geran-2". It caught my eye that the captions under a number of illustrations are in yellow-Blakit language, and the main text is in Russian, but obviously translated automatically. It seems that the American hosts sent their pamphlet to the Ukrainian "brothers in arms" in its original form, and the interpreter from the Armed Forces of Ukraine quickly got tired of translating from English into a non-existent language.


Nevertheless, the report gives a fairly complete picture of the design of the Iranian kamikaze. I must admit that some of my interpretations of the meager data I provided last time were erroneous and overly optimistic.

"Cyborg" is, of course, too strong a word. The term “flying moped with a bomb” already circulating on the net fits this device much more (although you should not consider it an insult).

Shahed-131 is indeed "primitive" by the standards of the 21st century. There is no survey system on board, the main modes of operation are flight according to satellite navigation data or inertial guidance (when the position of the device is counted from the conditional “zero coordinates”, based on its speed, direction and flight time; a kind of “movement in azimuth”). Direct control by the operator is also possible, but only when the kamikaze is in direct line of sight (for example, in the field of view of the camera of another, more advanced drone). About the automatic following the leader, the distribution of goals between the kamikaze group - in a word, about "packing" - in the case of "one hundred and thirty-one" there is no question.

It is curious that a mixture consisting mainly of diesel fuel was used as fuel on the sample that underwent an “opening” (apparently, from the Yemeni theater of operations). Although the control system has a block signed with the abbreviation "automatic takeoff and landing", the latter is not provided for by the design, it does not have any system parachutes or any other elements for a safe landing. Thus, the return of the kamikaze to the base and its reuse are not expected: launched - be kind enough to blow something up.

As for the “blow up” at Shahed-131, everything is definitely in order. In the middle part of the hull (the nose is occupied by a battery and several counterweights) there is a powerful cumulative fragmentation warhead of 15 kilograms of explosives - this is enough to break through the frontal armor of any tank, a couple of meters of reinforced concrete or a ship's hull from side to side. To defeat unarmored targets, a cylindrical charge is tightly lined with striking elements in the form of hard-alloy cubes with a side of 7 millimeters. Several kilos of such "bullets" can shred manpower and equipment over a large area.

“But the report refers to the Shahed-131, and the Russian army uses the Shahed-136,” yes, this is true, but the characteristics of these devices do not differ radically. Most likely, “one hundred thirty-sixth” is the same “one hundred and thirty-first”, but technologically optimized, possibly transferred to another element base, (probably) capable of receiving a GLONASS signal, etc. In short, the difference is about the same as between the "six" and "penny". It is known for sure, for example, that the 136th model also does not have its own "eyes".

In general, it is clear that the characteristics of a kamikaze make it much more suitable for hitting stationary (or at least inactive) targets than maneuverable ones. In the context of hunting for HIMARS and Krab, this means that you need to identify their hideouts and ammunition depots, and bombard them with Geraniums. Therefore, it’s even funny that the first victims of the Iranian kamikazes were the self-propelled guns of the Ukrainian fascists - apparently, their crews behaved too relaxed, did not change their position for a long time and were poorly camouflaged, which turned their vehicles and themselves into “stationary” targets.

Judging by the events of the past few days, Russian troops are actively engaged in the search for a niche and optimal tactics for the use of new weapons. The results are quite encouraging.

On September 23 and September 24, flocks of "flying flowers" densely cultivated Odessa. On the first day of the raids, strikes were carried out on the objects of the Odessa port, including the building of the headquarters of the Ukrainian Navy; in the second - by headquarters of the operational command "South", warehouses of ammunition and fuel. It is characteristic that if the attacks on September 23 brought rather a psychological result, raising that very “grand nix” all over Odessa, then on September 24 the “mopeds with bombs” achieved concrete practical success, in the form of the destruction of enemy reserves and a certain number of staff workers.

On September 26, a domestic-made Geranium-2 and Lancet-3 group raid was carried out on the positions of the Ukrainian towed artillery division near Ochakov, it is alleged that about two dozen kamikazes of each type participated in the attack. As a result, the division was practically defeated, losing up to 10 guns of various types (the former Soviet D-30, Hyacinth-B and Lend-Lease FH-70) and several thousand shells in a blown up ammunition depot. In addition, other targets in the neighborhood were hit during the raid: a fuel depot, an air defense command post and a security company headquarters.

During the raids on Odessa on September 23, our troops lost one Mohajer-6 - a reconnaissance and strike UAV of Iranian origin, similar in characteristics to the Turkish Bayraktar TB2; ironically, it was the video of the drone floating in the sea that served as the first ironclad proof of its use by the Russian army.

Obviously, during the operation, this particular UAV served to correct the Geranium raids and objectively monitor the results. But how it ended up in the water is not entirely clear: combat damage is not noticeable on the hull, so it could have been “shot down” by enemy electronic warfare, or lost due to technical problems or piloting errors.

Mohajer-6, like its Turkish “colleague in a dangerous business”, is capable of carrying light bombs or ATGMs, which makes it also a potential “HIMARS hunter”: hypothetically, loitering with a target load over enemy territory, the “sixth” could hit enemy MLRS and self-propelled guns on their own, immediately after detection. On the other hand, such tactics can lead to heavy losses of the UAVs themselves, which are quite vulnerable to any air defense systems. According to rumors, Mohajer-6 is equipped with excellent optoelectronics, not inferior to the Turkish counterpart, so using them as reconnaissance aircraft can bring greater dividends than as attack aircraft.

Geranium-2, on the whole, confirmed its great potential. Iranian media proudly reported on the success of domestic weapons on the fields of Ukraine, while Zelensky hastened to express his indignation: already on September 23, the Iranian ambassador in Kyiv was deprived of accreditation and a demand was made to reduce the number of diplomatic workers.

An information campaign has also been launched to discredit Iranian kamikazes. On September 23, a video appeared from the Dnepropetrovsk region, in which another Geranium explodes in the air, hit by small arms fire. Although there is nothing special about it (after all, the drone is two meters long and three wide, and is easily detected visually and by sound), a single video is accelerated as evidence of the "ineffectiveness" of Iranian kamikazes, which "shoot down on approach." Also, the thesis is being replicated that the allegedly preserved plumage planes (the very details with inscriptions) indicate that such and such a particular drone did not work properly, but was destroyed by anti-aircraft fire.

Finally, in some places it is alleged that the Russian Federation bought one thousand "one hundred and thirty-sixths" from Iran for $ 8 billion - that is, 8 million for each "flying moped", or twice the price of one Bayraktar. Although the actual price of "Geranium" is not disclosed, statements about 8 million apiece are clearly ridiculous, and are designed to obscure the effect of the use of kamikaze: they say, "yes, the result was achieved - but at what cost?"

Obviously, if Iranian drones were really ineffective, they would not have caused such hysteria among the Nazis. It is also obvious that after some time, kamikaze attacks will become "habitual", and will no longer have such a strong psychological effect - but high-explosive fragmentation will remain unchanged.
Reporterin Yandex News
Reporterin Yandex Zen
17 comments
Information
Dear reader, to leave comments on the publication, you must sign in.