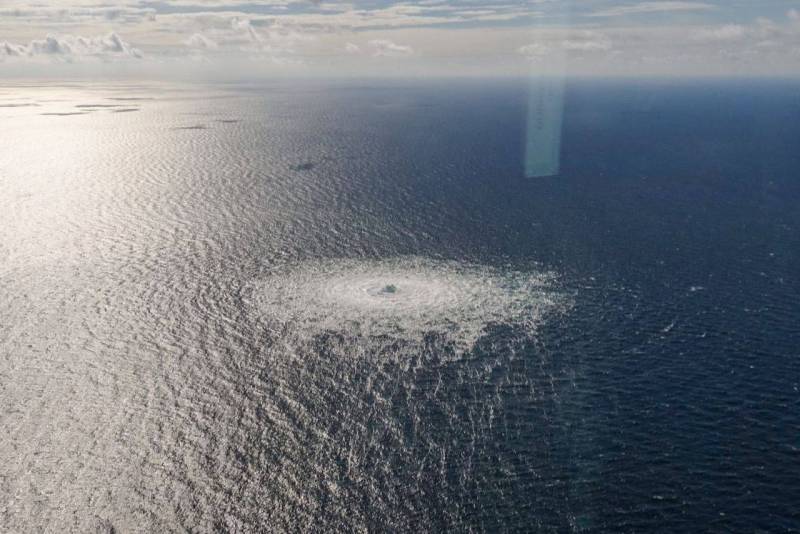 Yesterday's terrorist attack on the Baltic Sea will have far-reaching consequences. On September 27, 2022, the day when voting on referendums on the issue of reunification with Russia in the Donbass and the Sea of ​​Azov ended, three out of four lines of the Nord Stream and Nord Stream 2 underwater gas pipelines were blown up by unknown attackers. This sabotage can completely change the future alignment of the “Ukrainian case”.

At the moment, it is known that at the bottom of the Baltic there were two explosions, equivalent to 100 kilograms of dynamite each. Measuring stations of the Swedish National Seismic Network (SNSS) set their magnitude at 2,3 points. A sharp drop in pressure was recorded on the German side of both gas pipelines. Russian gas escaping from holes in underwater pipelines has created a semblance of powerful geysers on the surface of the sea. According to the Danish Energy Agency, in whose territorial waters the incident occurred, “big holes” formed in both Nord Streams.

What will be the consequences of this obvious terrorist attack and who can benefit from it?

Naturally, everyone immediately thought of Uncle Sam. The top officials of the United States have long declared war on Nord Stream 2 and have repeatedly spoken out harshly that they will not allow it to start working. Former Polish Foreign Minister Radek Sikorski, now a member of the European Parliament, posted the following message on a social network against the background of a photograph from the explosion site:

Thanks USA.
Indeed, the one-time shutdown of the pipeline infrastructure, which allows pumping a total of up to 110 billion cubic meters of Russian gas per year to Europe, is objectively beneficial for American LNG producers. In the event that the Ukrainian GTS is also disabled, it becomes practically uncontested for Europe, no matter how much it costs.

By an amazing coincidence, it was on September 27, 2022, on the day of the sabotage against the Nord Streams, in the north-west of Poland, in Goleniow, that the solemn opening ceremony of the Baltic Pipe gas pipeline was held. Yes, its capacity is relatively modest, only 10 billion cubic meters per year, but it is an important part of the strategy to reduce Warsaw's dependence on the Kremlin. Poland plays a key role in American plans to create a "cordon sanitaire" between Russia and Western Europe as part of the Trimoria or Intermarium project, whatever you want to call it. In the future, Washington plans to build an alternative to the existing gas transportation infrastructure, which will run in Eastern Europe from south to north and will be tied to the reception of American LNG.

In addition, there are purely technical issues related to the implementation of sabotage at an underwater facility. Depending on the depth of the pipeline, to blow it up, either high-class combat swimmers such as "fur seals" or disposable uninhabited underwater vehicles designed to destroy mines are required. It is known that shortly before the terrorist attack in the waters of the Baltic near the site of the explosion, the ships of the US Navy expeditionary detachment led by the UDC USS Kearsarge performed certain tasks.

Of course, no one caught the Americans by the hand, and therefore, despite the blatant evidence of what happened, one should not expect the perpetrators to be held accountable. The most important question is - what will happen next?

Moment of the truth

The fact is that the restoration of both Nord Streams may take not even months, but years. Pipelines will have to be lifted and repaired, and then they will have to be re-certified. Since we are under sanctions, all this will once again fall on the shoulders of Gazprom alone. This epic will begin again with the distillation of pipe-laying vessels, obtaining permits from transit countries, etc. In the face of active opposition from the United States and its vassals, this means that Nord Stream and Nord Stream 2 are out of the game for coming years. This completely breaks the whole geopolitical game that the Kremlin was trying to play.

On the one hand, our political the leadership apparently tried to use "gas blackmail" in order to force the European consumer countries to stop or significantly reduce military support to Ukraine. On the eve of the start of the heating season in the EU, the chances for this were quite high.

On the other hand, in the Old World itself there was an active internal struggle. Nationally oriented European elites tried with all their might to “jump off” the theme of the proxy war against Russia and restore full-fledged energy cooperation. These people are well aware of what they threatens forced switch to more expensive American LNG. They were opposed by proteges of the White House in Brussels, who, contrary to the interests of the EU, pushed through the simultaneous "green" and anti-Russian agenda.

That's it, now both Nord Streams are physically gone, and the subject for negotiations has disappeared after the terrorist attack in the Baltic. Whatever you do, both gas pipelines will not return to operation quickly. And this greatly complicates the position of the Kremlin in the “Ukrainian case”.

Now, the Blue Stream and the Turkish Stream, passing along the bottom of the Black Sea, are under attack, where the Ukrainian Navy and Ukrainian combat swimmers, who have been trained to NATO standards and use the most modern Western weapons, are playing tricks. If they are also put out of action, the Ukrainian GTS will have no alternative for Gazprom in terms of continuing gas supplies to the EU.

And here comes the moment of truth. Europe is declaring its readiness to refuse Russian gas at any cost. True, the objective reality is that there is a considerable amount of coquetry in this position. The Kremlin, on the other hand, frowns menacingly and makes it clear that the supply of blue fuel can be stopped at any moment. You don't want to, you don't have to. It is not clear where the "gas dollars" will come from to replenish the federal budget. However, after the Ukrainian GTS turns out to have no alternative for Gazprom, all this political “pretense” on both sides can fly off at once. In the near future, if sabotage also occurs on Russian pipelines to the south, we will see who really wants to keep exports to Europe more: the EU on the eve of the start of the heating season or Gazprom itself.

If the Kremlin is set on a decisive victory over the "Western partners", then the difficult situation with the "Nord Streams" will be used in Russia's favor, and gas supplies through the Ukrainian GTS will be reduced even more, and then completely ceased to be carried out until the military support of Kyiv ceases .

If everything revolves exclusively around the conditions for further energy cooperation, then the actions of the Kyiv regime, which holds the valve in its hands, will increase sharply. Then the European partners will demand to increase the flow of gas through Ukraine and at the same time reduce the military activity of the RF Armed Forces, which may pose a threat to the integrity of transit pipelines. If the Kremlin goes towards the collective West, then we have already lost this war on September 27th. In 2014, President Putin limited himself to Crimea, in 2022 he is required to limit himself only to the Crimean Federal District, or even not to recognize the results of referendums at all. Involuntarily, certain parallels arise with the death of the Malaysian Boeing over the Donbass in 2014, destroyed by the Ukrainian Nazis, after which the offensive activity of the militia was stopped and Minsk-1 was soon signed. The consequences of that decision have to be disentangled now.

We hope that events will not go according to the second, dead-end and erroneous scenario, and the Kremlin will not allow itself to be deceived once again. The price of reducing military activity is a large-scale war 1-2 years later, which Ukraine itself will start, beating back our Crimean Federal District by force. The key to solving the gas problem both 8 years ago and today lies in Kyiv. He must be released and go to the Polish border. In turn, I would like to make a proposal - during the repair of the Nord Streams, at the same time, make a layer to the Kaliningrad Region, the expediency of which we reasoned just a few days ago.
Reporterin Yandex News
Reporterin Yandex Zen
34 comments
Information
Dear reader, to leave comments on the publication, you must sign in.