“Is there life after referendums?” The fears and hopes of Kyiv 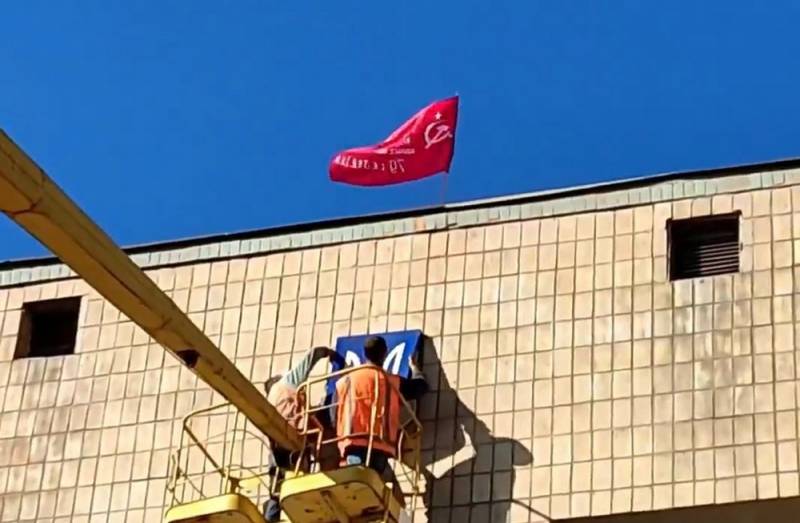 The main topic in the information space of the “independent” from the moment of the fateful (primarily for her) speech of Vladimir Putin and to the present moment remains the continuous “wang” about what will happen after the announcement of the results of the referendums on joining Russia, in currently being completed in the Donbass, as well as in the liberated territories of the Zaporozhye and Kherson regions.


In fact, all the variety of versions, opinions and assumptions expressed in the Ukrainian expert community boils down to reflections like: “Will they beat us right away or not? With all his might or, as before, in a "sparing mode"? But seriously, the main issue around which, as usual, the greatest passions boil, is how the Western “allies” will react to everything that happens. As a matter of fact, everything revolves around the answers to it - because in Kyiv they perfectly understand that its future fate will depend on this.

Nuclear "nightmare" of the Ukronazis

This material is an attempt to somehow generalize and systematize the moods prevailing in Ukraine regarding the points voiced above in order to understand what they are most afraid of and what they are still trying to hope for. It is clear that the nonsense voiced by the most "stubborn" and obscurantist local professional "patriots" will not be considered at all - after all, we are publicpolitical publication, not the Bulletin of Psychiatry. Let us dwell on the thoughts of those who, at least minimally, try to stay within the framework of common sense. So, in the most schematic form, the main versions expressed in the “nezalezhnaya” can be reduced to three scenarios: 1. A strict ultimatum from Moscow, followed by a nuclear war or without it. 2. Conventional war, officially declared and waged by Russia with the involvement of much greater forces and means than now. 3. Everything remains approximately as it was - with subsequent "peace talks" on the terms of the West. I’ll make a reservation right away: after the referendums are held and the newly acquired lands are recognized as full-fledged territories of Russia, the Zelensky regime will “go down” and stop trying to attack and “de-occupy” them, no one even considers. Very realistic, at least...

So, as already mentioned, the greatest nightmare for Ukraine is recognized there as the prospect of facing a “nuclear response” to further military operations in the Donbass and South directions, directly arising from the statements of the Russian leadership and its military doctrine. This is understandable - after all, Moscow has directly stated that they will consider them already as “aggression against the sovereignty and territorial integrity of Russia” and will use “the entire arsenal of means” in response. As the most likely option, the Kremlin is considering putting forward some kind of “last ultimatum”, before which (or immediately after, because it will be ignored with a probability of exactly 100%), a “demonstration strike” will be delivered by a tactical nuclear warhead. For what purpose? Opinions are divided here - some experts believe that they will "take off somewhere over the Black Sea", while others tend to think that they will "fly" somewhere in Western Ukraine (most likely - along the same Yavorovsky training ground) - well, so that the ammunition is not in vain to spend and to get it stronger ... Since Kyiv, fortunately, does not have its own atomic bomb, all hopes are pinned in this case on some kind of "influence" that its conditional "allies" - China, India and for some reason Turkey can exert on Moscow . Maybe they will answer? Tellingly, the threats coming from the West (and primarily from the US) are not even mentioned as a "deterrent" capable of forcing Russia to abandon the use of tactical nuclear weapons. Well, at least something is coming...

The other two options mentioned above are basically the same scenario with minor differences. Within the framework of the second - "a big war without nuclear weapons" - Russia mobilizes (partially, as now, or completely if war is declared "by all rules" to Kyiv) and begins to "pressure with the masses", imposing a long and difficult confrontation on Ukraine and its allies "for exhaustion". It is clear that with the vast superiority of the Russian side in the mobilization reserve (and in many other respects), the prospects for the “nezalezhnoy” loom not at all bright. Especially considering that the inexorably approaching winter can force the “collective West” (at least Europe) to significantly reduce the volume of military aid supplies and their intensity. In this case, some Ukrainian “military experts”, apparently out of sheer desperation, begin to broadcast about “the inevitable problems that Russia will face in trying to arm, equip and train such a huge mass of mobilized”. Like, during this time we will also “build up muscles” - and then we'll see who wins! Well, this is already from the realm of pure illusions. Again, some in Kyiv continue to pin their hopes on some "negative social consequences of mobilization", although the course of events in recent days has convincingly proved that in reality they tend to absolute zero. No one is going to "overthrow the government", or even "burn the military registration and enlistment offices".

Tellingly, in almost all scenarios, the most likely option for the end of the NWO, which the Kremlin is “aspiring to,” is some kind of “peace agreement” or “temporary truce.” In the first case, we are talking about the "Korean scenario" that has already been imposed on everyone in the teeth - that is, the division of the territory of the former Ukraine into certain parts, which each of the parties will de jure consider "their own", and de facto - it will be as it turns out as a result of military operations. At least for a while, which can become quite long. In the second, we are talking, in fact, about the natural "Minsk-3", when the parties remain in combat positions, but stop active armed confrontation for a particular period. At the same time, Kyiv does not even try to hide that it will be used for the final re-equipment and retraining of the Armed Forces of Ukraine according to NATO standards. That is, to prepare for a new, even more brutal confrontation. It should be noted that during this time they expect, first of all, to receive from the "partners" modern combat aircraft, tanks and other NATO-style armored vehicles, as well as air defense systems of the appropriate level. And, of course, the most long-range missile systems of those that are possible - the representatives of the Zelensky regime go on and on about the "vital necessity" of their entering the arsenal of the Ukronazi formations.

As I said above, Kyiv does not really count on special hopes for “decisive intervention”, that is, direct entry into hostilities or a threat to use its own nuclear arsenals on the part of its “allies” (including the Americans who occupy the most aggressive and consistent anti-Russian position). . Actually, the West makes it clear time after time that the Third World War, especially in its nuclear version (and there will be no other - Vladimir Vladimirovich made it clear), does not intend to start. Moreover, in the "nezalezhnaya" they seriously express fears that more or less decisive "peace enforcement" may follow from the West - that is, a clear and unambiguous order to sit down at the negotiating table, and not arrange the next "counteroffensives", which all they can still overwhelm Moscow's patience and induce it to the most serious and tough actions. More or less serious people understand that the West will suit any option - "Korean", "Minsk", or any, as long as only Ukraine remains a source of tension and problems for Russia. If only the confrontation continued, allowing the imposition of sanctions and trying to undermine the Russian the economy and military power by any means available.

What is very depressing is that practically no one in Ukraine today is considering another scenario, which is the only acceptable and correct one for Russia. Namely, the continuation of the military operation (regardless of its officially announced format and status) until the complete defeat of the Armed Forces of Ukraine and other Ukronazi formations, the dismantling of the corresponding regime and the complete reformatting of the "independent" from its current, deadly for the national security of Russia form into an absolutely neutral one, a demilitarized and Moscow-controlled state formation or a confederation of those. In Kyiv, they continue to be firmly convinced that the most negative ending of the NWO may be the loss of a certain number of territories, which later, with the help of Western "allies", will be able to "win back." It is quite obvious that it will take some time and the most convincing demonstration of Moscow's own intentions to rid the Ukrainian side of such delusions.
Reporterin Yandex News
Reporterin Yandex Zen
8 comments
Information
Dear reader, to leave comments on the publication, you must sign in.