Far East: a new bridge to the Celestial Empire

October 14 2018
2
Russia and China continue to strengthen their ties and draw closer at all levels - political, economic and military. 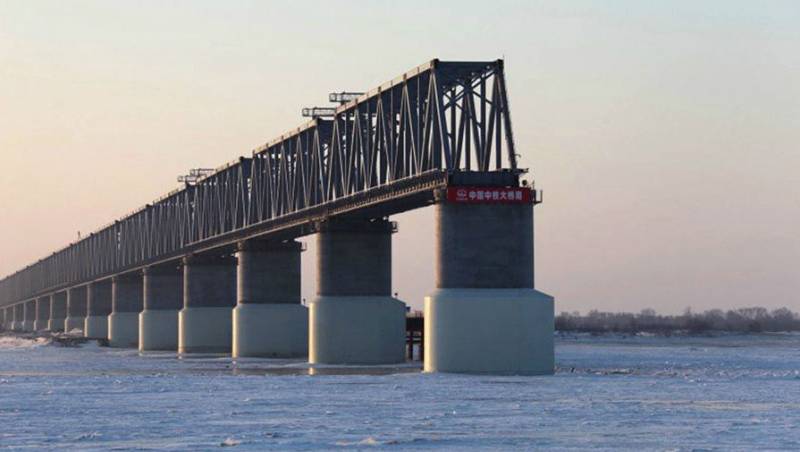 According to China’s central television, the Chinese side reported the completion of its half of the railway bridge across the Amur River.

The total length of the bridge is 2 thousand 215 meters, of which 1 thousand 886 meters is located on the Chinese side. On the Russian side, construction began only in 2016. Docking will take place this fall, and the commissioning of the bridge is expected at the end of 2019.

It should be noted that the construction of the bridge is the final stage of a long process of negotiations and joining the interests of Russia and China. The first negotiations between the two countries regarding the need to build a bridge took place back in 1993.

The new bridge will increase the flow of goods and passengers between countries and will strengthen the connection between neighboring regions of Russia and China.
Ctrl Enter
Noticed oshЫbku Highlight text and press. Ctrl + Enter
We are
The incident on the Crimean bridge: the flight crashed
Krymsky bridge: on the way to new records
Reporterin Yandex News
Read Reporterin Google News
Ad
We are open to cooperation with authors in the news and analytical departments. A prerequisite is the ability to quickly analyze the text and check the facts, to write concisely and interestingly on political and economic topics. We offer flexible working hours and regular payments. Please send your responses with examples of work to [email protected]
2 comments
Information
Dear reader, to leave comments on the publication, you must sign in.