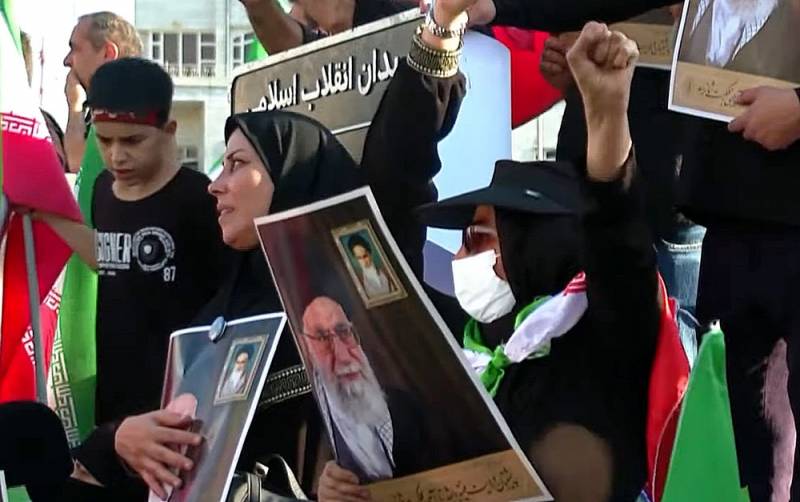 Since September 18, they have been raging in Iran, then subsiding, then flaring up again, popular unrest. This time, the reason for them was the death of twenty-two-year-old Mahsa Amini, who lived in Tehran: the girl was detained by the Instructive Patrol (a special police unit that monitors compliance with Sharia in public places) for wearing the hijab incorrectly and taken to the police station. By evening, she became ill, an ambulance took Amini from the neighborhood immediately to the intensive care unit, where she died.


Officially, the girl's death is called an accident. Indirectly in favor of this version is not the strongest health of Amini: she suffered from a number of chronic diseases, including epilepsy. It is quite possible to assume that the stress of detention could have caused an aggravation of one of them, the police could not provide first aid properly, and by the time the doctors arrived, time was lost.

However, despite the conclusion of the doctors who examined the deceased, who did not find any signs of violence, the girl's relatives denied that she had illnesses and stated that she was severely beaten by the police and died precisely because of the beatings. The piquancy of the situation is added by the fact that the Amini family is Kurdish by nationality, that is, a deliberately “oppressed minority”.

The funeral, which took place on September 18, quickly turned from a civil memorial service into a national gathering, and then into political manifestation of anti-Sharia orientation. On social networks, this motif quickly spread in the northwestern regions of Iran, populated mainly by Kurds.

Beat, woman, with a hammer

The first couple of days of demonstrations were relatively "peaceful" - although not without art such as blocking traffic and lighting fires in the streets. On occasion, Iranian girls went into a real “breakaway”: they defiantly took off their hijabs, tore them apart, burned them, and also cut off their traditional long hair, after setting them on fire. Cunning Western journalists hastened to christen these demonstrations the "black kerchief revolution."

Hostility towards the latter as a symbol of religious and ideological diktat and, in principle, the strict morals prevailing in the Islamic Republic is, in general, not difficult to understand. A certain role was also played by the fact that on September 8 in Iran, for the first time in the history of the country, two lesbians were sentenced to death (although not for their homosexual orientation itself, but for promoting it and contacts with banned media), which, apparently, was perceived by some Persian women as an attack against the entire feminine gender in principle.

By September 21, the situation on the streets began to spiral out of control. The demonstrators began to attack women in hijabs, and then on law enforcement officers, clashes broke out. In the excited crowds, small groups or single “ringleaders” became noticeable, who at first shook the extras with the “correct” slogans, and then threw them into the attack on the police cordons. Characteristically, the imposed restriction on Internet access sharply upset the rioters, who were coordinated through social networks, but then access was restored for some reason, and protest activity began to grow again.

At present, the situation in Iran is stably difficult, the main heat of passions still falls on the north-west of the country. In support of the police and the Basij paramilitary detachments, detachments of the IRGC (but not the regular army) were also taken to the streets. Demonstrators are dispersed both with the help of non-lethal means and (in isolated cases) small arms. As of Sunday evening, 700 detainees and 100 deaths were reported on both sides for the duration of the protests.

Taking advantage of the unrest, the Kurdish armed underground and the "Organization of the Mujahideen of the Iranian People" became more active, which had been fighting for the overthrow of the ayatollahs for decades. Apparently, it is at the suggestion of her agitators that slogans are heard on the streets not just against Khamenei and Raisi, but immediately “long live Shah Pahlavi”. The heir to the Persian throne, Reza Pahlavi, as well as the leader of the OMIN, Maryam Rajavi, actively support the uprising with a “kind word” through social networks. Thrown in the information field a couple of times news about the alleged death of Ayatollah Khamenei, who is really seriously ill and has not appeared in public lately.

In the Western media, the situation is covered, quite expectedly, like any other Maidan against the "totalitarian dictatorship". The deceased Mahsa Amini is compared with the hero of America - the notorious George Floyd, and the whole "movement" - respectively, with the BLM movement. The successes of the protesters in overthrowing the "bloody regime" are seriously embellished, in some places they even claim that part of the police has allegedly gone over to the side of the "freedom fighters". In a number of countries, members of the local Persian diasporas held small rallies in support of the rebels. Elon Musk did not stand aside either: against the backdrop of an incomplete, but still significant restriction of Internet access from Iran, the billionaire announced his readiness to provide the rebels with access to the Starlink satellite network, which is already in full use by Ukrainian fascists.

Appointment as a beloved wife

"Riot of the Black Handkerchiefs" clearly demonstrates a couple of interesting points. The first of them is, of course, the really outstanding ability of the American intelligence services to pick up and use almost any “case” for their own purposes. Where did it all start? In a rather closed eighty million (!) country, someone tragically died. From this, in a couple of days, civil unrest was unleashed on the scale of a good third of this eighty millionth country (and the rest of the world is getting a picture of almost total civil war within its borders).

To create such an effect, the capabilities of modern telecommunications and media are not just used to their fullest, but skillfully applied to the local mentality and real-life “sore spots”. It is interesting to compare the Iranian situation with the attempts of Western "partners" to undermine it in Russia, despite the fact that our people are much more Westernized (and therefore more understandable to enemy intelligence services) than the Persians; despite the fact that in our practically open information environment, foreign "voices" feel much more at ease and receive almost no ideological opposition (at least official) - with all this, six months of massive information bombardment of our country brought very modest results. There is no talk of any real "instability".

And here the real degree of tension in Iranian society is revealed: it is very high. Without an appropriate fire-hazardous environment, the fire of civil disobedience would not have flared up literally from one match - and in Iran this is the second fire in six months (the previous one was in May of this year against the backdrop of a jump in food prices and basic necessities).

Moreover, all the blame for the “disturbance of the calm” cannot be attributed to national minorities alone: ​​after all, the area of ​​spring riots fell mainly on Persian territories. So, it seems that the number of those dissatisfied with the current course of the Islamic Republic (at least, the conservative domestic policy) is not just large, but is at the level of a “critical mass” capable of creating a permanent threat to the stability of the state. So far, the ayatollah regime has been relatively successful in extinguishing internal outbursts of discontent with police methods and by opposing the “dissenters” with its active supporters (of which there are many and who are also demonstrating these days, supporting the existing system), but will this be enough for a long time?

It is obvious that attempts to interfere in the affairs of Iran from the outside will not only not stop, but will only intensify. At the moment, the "kerchief riot" is an asymmetric American response to the entrenched militarytechnical cooperation between Iran and Russia (and we are talking not only about the purchase of a large number of Russian Iranian UAVs, but also about the reverse transfer of Russian technologies, in particular GLONASS). In the future, the “democratization” (that is, the collapse and civil war) of the Islamic Republic is one of the most important elements of the emerging pro-Anglo-Saxon reformatting Middle east и Central Asia. The ultimate goal is, apparently, the creation of a continuous "great belt of instability" from the Mediterranean to the Pacific Ocean, geographically dividing Russia and China with all the ensuing consequences.

So I would not want the civil confrontation in Iran to continue to flare up. Although the ayatollah regime in its current form is objectively outdated, the only real alternative to it is bloody chaos in the country, which will then begin to spread throughout Eurasia.
Reporterin Yandex News
Reporterin Yandex Zen
7 comments
Information
Dear reader, to leave comments on the publication, you must sign in.