The "occupation" of Mars begins?

February 26 2018
0
Is there life on Mars? This is not known to science for certain. But enthusiasts from science have long wanted to get an answer to this question. And more recently, this desire has become more realistic when the American billionaire Elon Musk announced his intention to send colonists to the red planet. 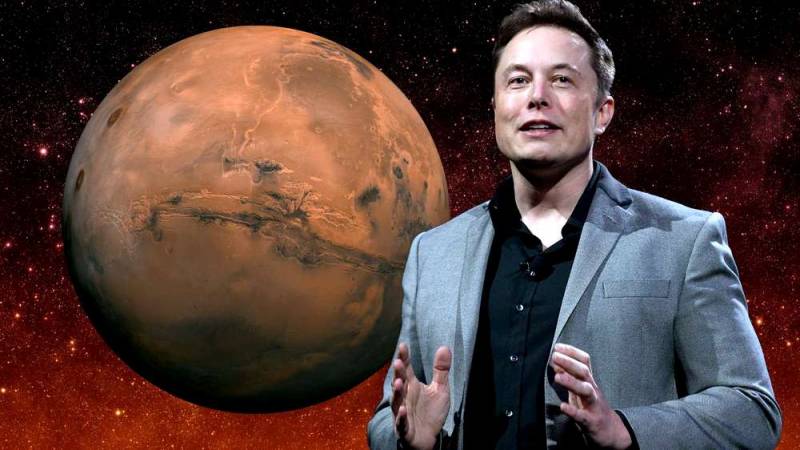 Ilon Mask modestly named his project of a trip to Mars - the project of the interplanetary transport system ITS (Interplanetary Transport System). It is supposed to send up to half a million people to the red planet in just 50 years. True, Musk honestly warns that a ticket for space colonists is likely to be one way. All travelers who believe in the idea of ​​Mask will have to stay in an autonomous Martian settlement forever when it is built.

Life on Mars will be savory. Cold, cosmic radiation on the surface of the planet, which is not protected unlike Earth, by a magnetic field, an acute shortage of resources. The so-called terraforming of Mars can take hundreds of years at the current level of technologiesso that rivers appear on its surface and at least the most primitive organisms can live.

How is the American billionaire going to transport such a mass of people and payload to another planet? The American proposes to create the largest missile ever created by mankind, with a height of 122 meters and a diameter of 12. The ship's capacity is assumed to be up to 200 people, and its carrying capacity is 450 tons with fuel. The expected time in the interplanetary journey is 150 days. The use of a nuclear or ion engine in the manned spacecraft Mask is not expected, engineers propose to rely on traditional chemical engines. As fuel for them, Mask scientists see methane gas, which can be extracted on Mars itself from water and carbon dioxide. Musk previously named Heart of Gold as his miracle ship. SpaceX plans to make tens of thousands of flights across the red planet.

With all the enormity of the plans, Mask cannot but admit that he is confidently moving towards his dream. It is planned to use the increased first stage of the Falcon 9 rocket as the first stage of the ITS carrier. On February 6, 2018, the SpaceX superheavy Falcon carrier rocket was successfully launched, which opened the way to Mars. British astronaut Tip Peak comments on this breakthrough in private space exploration:

We are entering a new era of space exploration, which is very, very interesting. I think that people will be on Mars in the late 2030s. That is what the state space agencies and the International Space Research Coordination Group are working on.


The British believes that to the red planet, humanity will start from the future international near-moon station, which has yet to be built. In his opinion, the Ilona Mask company will be able to make a big contribution to these projects:

We see the designs of people like Elon Musk. There are a number of other companies that also want to send people to Mars. I think that as a result, we will work very closely with these companies as part of a public-private partnership, and then we will eventually go to Mars

I would like to note that for the flight to Mars and the founding there of a successful and viable extraterrestrial colony, a lot of technical problems still have to be solved. Work on these tasks is rapidly developing the science and industry of the countries participating in this project. Whether Russia with its “effective managers” from Roscosmos will participate in a big Martian adventure is a big question.
Ctrl Enter
Noticed oshЫbku Highlight text and press. Ctrl + Enter
We are
Why is the moon still not owned by the Americans?
Russian nuclear engine will not leave a chance for Ilona Mask
Reporterin Yandex News
Read Reporterin Google News
Information
Dear reader, to leave comments on the publication, you must to register.
I have an account? Sign in