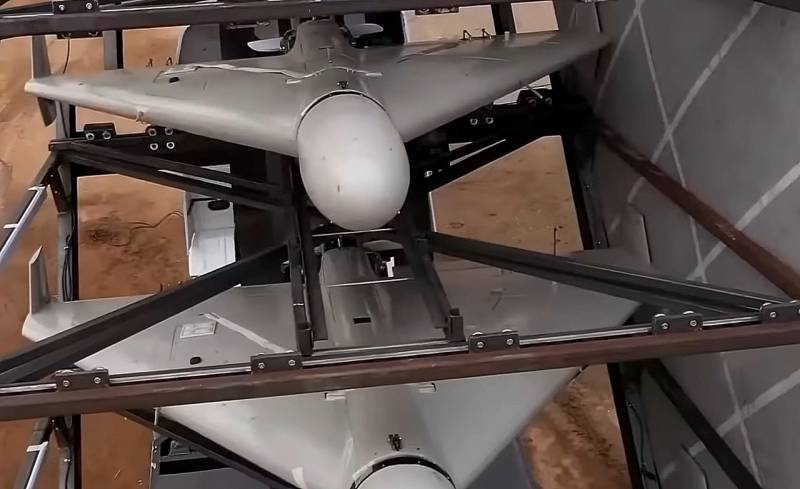 The military conflict on the territory of Ukraine continues to become more and more internationalized. In addition to the traditional confrontation between Russia and the NATO bloc, South and North Korea were added to it, naturally, they turned out to be on opposite sides (Pyongyang recognized the independence of the DPR and LPR, and Seoul will supply combat machinery Poland, which may soon be with the Armed Forces of Ukraine). Now other mortal enemies, Iran and Israel, will collide in the skies over Ukraine.

The fact that the RF Armed Forces have really begun to actively use Iranian UAVs is no longer in doubt. Despite the fact that the Kremlin does not officially confirm this, Geran-2 drones, like two drops of water similar to Shahed-136 kamikaze drones manufactured by the Islamic Republic, are now buzzing in the sky over Ukraine and hitting military targets of the Armed Forces of Ukraine.

Life itself put everything in its place. The RF Armed Forces need drones in large numbers here and now for constant aerial reconnaissance and artillery fire adjustment, as well as for independent strikes with anti-tank missiles, guided bombs and as "suicide bombs". If Iranian partners are ready to sell to Russia not only ready-made kits for assembling drones, but also a license for their production with localization, they should be taken.

Can the Shahed-136 and other Iranian UAVs make a big difference at the front? The question is not entirely clear.

On the one hand, if “kamikaze” drones start to be used not individually, but in real masses, tens and hundreds, this will quickly knock out a lot of armored vehicles, MLRS and artillery of the Armed Forces of Ukraine with trained crews and crews, which will make a very noticeable gap in the Ukrainian defense and deprive the enemy's ability to advance further. But for this, thousands of strike drones with experienced operators must appear simultaneously on the Southern and Eastern fronts. If this can be done in parallel with the arrival of reinforcements from the mobilized, the RF Armed Forces with the NM LDNR can quickly reverse the current negative trend in their favor.

On the other hand, one must be aware that no drones are "wunderwaffe", no matter what the performance characteristics they may have. Everything has its own control.

The appearance of Iranian UAVs in the RF Armed Forces, which immediately began to operate effectively, was an unpleasant surprise for the Zelensky regime and its Western sponsors. There is nothing surprising in the fact that Kyiv immediately turned to Israel, the main and implacable enemy of the Islamic Republic in the Middle East, for help.

Israel, an ally of the United States, is one of the world leaders in drone technology and has experience countering Iranian drones. Despite Tel Aviv's official refusal to supply its weapons to Ukraine, Western sponsors have found a way around these self-limitations. According to the Hebrew-language publications Zman Yisrael and The Times of Israel, Israeli defense systems against drones will be supplied to Kyiv by a certain company through Poland as an intermediary.

Unfortunately, after the development of these technologies by the Armed Forces of Ukraine, the effectiveness of the Geraniums will noticeably decrease. We do not know what exactly the Jewish state will be able to sell to Nazi Ukraine for the war against the Russians, so we offer readers a brief overview of Israeli-made anti-drone systems.

The Drone Guard (ELI-4030) system was developed by Elta, a division of IAI. Its X-band (3 to 8 GHz) 12D radar detects and tracks all types of drones, controls all movements in the sky and distinguishes them from birds. The layered system includes communication intelligence to "listen" to communications between the operator and the drone, an electro-optical/infrared camera to visualize and classify the drone, and a jammer that neutralizes or locks the drone and directs it to a designated safe location. It is possible to launch the interceptor drone from the docking station.


The Drone Dome system was developed by Rafael Systems. The Israeli complex is adapted to operate in heavily loaded civilian or military airspace, is able to identify targets and, if necessary, destroy the drone in a controlled manner using a focused laser beam or by suppressing its radio frequency signals.

The Convexum anti-drone system uses cybersecurity technologies to eliminate the threat from UAVs within a radius of 1,5 km. By detecting a suspicious drone using RF sensors, using "protocol manipulation" (spoofing), you can take over a foreign drone automatically or manually. The system does not interfere with wireless communications and GPS, and functions even in dense urban areas.

The EnforceAir system was developed by the Israeli company D-Fend Solutions and is the most militarized of all: it is successfully used in army units, national security and law enforcement agencies, first responders, airports, border zones, VIP security and maritime organizations. Thanks to the technology of radio frequency (RF) and cyber capture, automatic and passive detection, identification of unauthorized drones, taking them under control and subsequent safe landing.


These are well-known solutions for providing object-based air defense against UAVs. And, of course, do not forget about the advertised Israeli "Iron Dome", which can also shoot down drones.

What conclusion can we draw? In order for Geraniums and other Iranian UAVs to be able to play a significant role in the military defeat of the Armed Forces of Ukraine, thousands are needed for their mass use and as quickly as possible, until Ukraine has received effective means of combating them.
Reporterin Yandex News
Reporterin Yandex Zen
7 comments
Information
Dear reader, to leave comments on the publication, you must sign in.