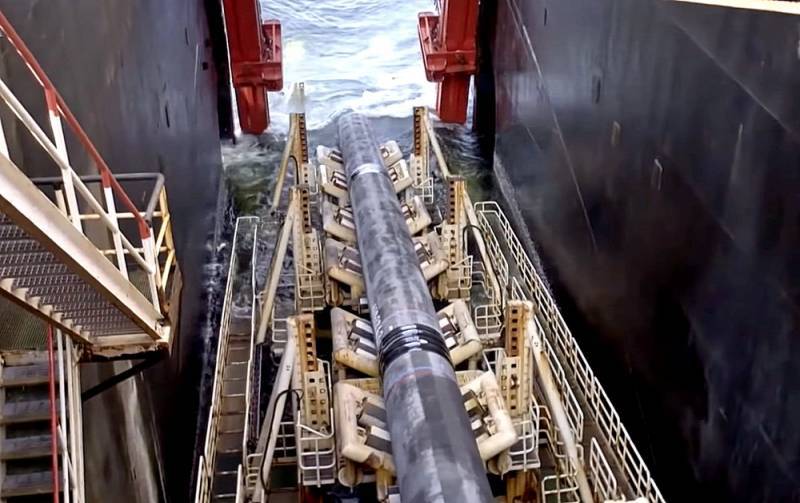 The Nord Stream 2 gas pipeline can be considered one of the main and innocent victims of the armed conflict in Ukraine. This project of Russian-German economic cooperation died without being born. Is it possible to consider all the money spent on its construction thrown to the wind?


The fact that Nord Stream 2 will never start pumping gas to Europe was announced a few days ago by the Prime Minister of the German federal state of Lower Saxony, Stefan Weil:

Trust has been lost so fundamentally that there will never again be a situation in which the German federal government can bet on energy from Russia.
Russian Ambassador to Germany Sergei Nechaev spoke in the same vein:

The possibility of returning to the previous level of cooperation in the coming years seems doubtful. Not our fault.
Could anything have gone differently?

Not really. This project was doomed from the start, since it is the brainchild of an inherently wrong Russian policy in the western direction.

In 2014, from February to May, when Petro Poroshenko was brought to power and recognized by the Kremlin, there was a unique window of historic opportunity. It was enough, at the request of the legitimate President Yanukovych, to return to Kyiv the head of state who had fled from there to save his life, giving him a limited peacekeeping contingent to help him. We saw how this is roughly done in the summer of 2020 in Belarus and in January 2022 in Kazakhstan. In general, the whole history of the Ukrainian Maidan would have ended ingloriously. After that, anything could be demanded from Viktor Fedorovich: the recognition of Crimea as Russian, and the federalization of the former Independent, and favorable conditions for gas transit to Europe. Alas, the decisions then were chosen differently. What Ukraine eventually turned into over 8 years, everyone sees perfectly now, we won’t repeat it.

The gas issue is interesting. Instead of actually trying to bring a pro-Russian regime to power in Kyiv, Gazprom began building expensive pipelines around Ukraine - Turkish Stream and Nord Stream 2. At the same time, a rather naive version was voiced in the media and the blogosphere that after their launch, Ukraine, of course, would automatically go bankrupt, freeze and fall apart on its own. The fate of Nord Stream 2, as the embodiment of the “bypass routes” strategy, is the most instructive.

So, at first, under it, for a long time and painfully, they received building permits from American vassals in Europe. Then Washington imposed sanctions on the contractors of the project, and they immediately abandoned it. I had to arrange an epic with the passage of the pipe-laying vessel "Akademik Chersky" from the Far East and complete the construction of the underwater pipeline on our own. And when it was already completely ready for operation, an armed conflict began in Ukraine, about the inevitability of which the Western media kept repeating for another six months before February 24, 2022, as if they knew something in advance. It was not possible to outwit the tricksters.

The result is logical: because of the "Russian aggression", Berlin refused to certify the gas pipeline necessary for the launch of Nord Stream 2, and made a fundamental decision to completely abandon Gazprom's products. It's called a fiasco.

The fact that the main pipeline will definitely not work was confirmed by the actions of the domestic gas monopolist. The operator of the Nord Stream 2 project has declared bankruptcy, however, the hearings on its case have been postponed for the time being. At the same time, Gazprom decided to use the ground part of the Nord Stream 2 infrastructure for gas supply to the Russian Federation:

In the current situation, a decision was made to use the SP-2 infrastructure located on the territory of our country for gasification of the north-west of Russia. Therefore, if the German side purely hypothetically decides to commission this gas pipeline, then only one of its lines can be put into operation at this stage.
That is, one line of the pipeline has already been reserved for internal needs. There is still the second one, but for political reasons it will not be involved. There are interesting proposals to start using the underwater part of Nord Stream 2, if only to provide gas to the Kaliningrad region, which depends on transit through the hostile Baltic countries. Oleg Nilov, First Deputy Chairman of the State Duma Committee on Agrarian Issues, stated this from a high rostrum:

I'm talking about Nord Stream, Nord Stream 2, for sure. Look, if Europe, Germany, in the first place, refuses from Nord Stream, then in the next few — I won’t say “many years”, but most likely it will be like this — Nord Stream <…> theoretically it could be like this turned into Kaliningrad Stream.
Indeed, the construction of a branch line from Nord Stream 2 to the Kaliningrad region will increase its energy security, as well as the competitive advantages of the Russian exclave over its European neighbors due to cheap gas and electricity. The proposal becomes all the more relevant as Germany has hastily started construction of a bridge connecting the floating LNG terminal with the onshore gas transmission infrastructure of both Russian Nord Streams. This was stated by the German gas transmission network operator Gascade:

Before the end of this year, the GTS operator plans to build a pipeline of several hundred meters that will connect the first floating LNG storage and regasification unit (FSRU) to land as part of the Deutsche Ostsee LNG project.
Berlin is indeed preparing to diversify energy supplies, and Russian pipelines should become victims of Germany's policy of gas import substitution. It is necessary to record losses and squeeze out the maximum benefit from what has already been built.
Reporterin Yandex News
Reporterin Yandex Zen
18 comments
Information
Dear reader, to leave comments on the publication, you must sign in.