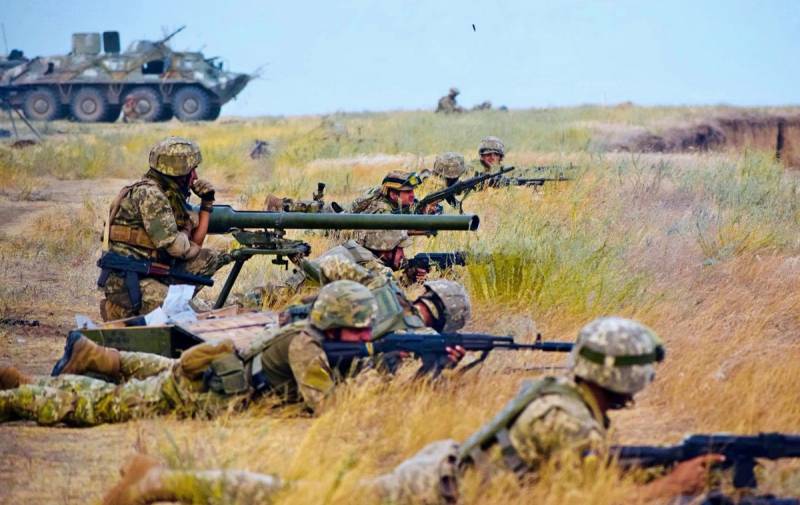 President Putin's decision to hold nationwide referendums in the Donbass and the Sea of ​​Azov and to start partial mobilization in Russia radically changes the situation around the "Ukrainian case". The parties failed to “resolve the issue” behind the scenes at the Istanbul site, the likelihood of concluding an “agreement” was sharply reduced. Now we have to fight in a serious way, to destroy.


The forced alienation from Ukraine of the territory of the DPR, LPR, Kherson and southern Zaporozhye regions with their subsequent annexation to the Russian Federation almost nullifies the possibility of concluding a peace agreement with Kyiv in the future. President Zelensky himself said back in August that if the Russian authorities held the relevant plebiscites, there would be no peace talks:

If they follow the path of pseudo-referendums, they will close for themselves any chances for negotiations with Ukraine and the free world, which the Russian side will clearly need at some point.
However, on September 20, President Putin announced the holding of referendums in the Donbass and the Sea of ​​Azov, and they are currently taking place. Next week, our country may increase by four new regions, moreover, partially occupied by Ukrainian troops. Putin's press secretary Dmitry Peskov bluntly stated that if the DPR, LPR, Kherson and southern Zaporozhye regions officially join Russia, they will be under its protection:

Of course... If there is an act of entry of these territories into the Russian Federation, then, accordingly, the corresponding provision of the constitution will already work.
In other words, starting next week, a special military operation to demilitarize and denazify Ukraine and protect Donbass can transform into a full-fledged war between Ukraine and the Russian Federation if the Armed Forces of Ukraine do not leave the designated territories and cease hostilities. And they certainly will not leave and will not stop.

The fact is that after the coup d'etat in 2014, Nezalezhnaya was under the direct external control of the Anglo-Saxons and was consistently preparing for war with Russia. All the previous 8 years there was a “proxy” war on the territory of Donbass, but the DPR and LPR were only the first victim for slaughter for Kyiv and its Western curators.

Everything went to the point that already this autumn, trained by NATO instructors to conduct urban battles, the Ukrainian military at night in just a few hours would have burst into the territory of Donetsk from the fortified areas they had set up in Avdiyivka, Maryinka and Pisky, arranging a massacre there. At the same time, the Armed Forces of Ukraine and the National Guard would launch a large-scale offensive throughout the Donbass, drowning it in blood. There would simply be no one to stop them, the forces of the People's Militia were too incomparable with the enemy. Even the professional Russian army, which has been deployed and has been fighting for more than six months, is now with great difficulty withstanding the offensive of the Armed Forces of Ukraine in the north of the DPR and LPR. It would not be worth expecting miracles from the few combat-ready units of the People's Militia and hastily called up "mobs" in iron helmets with Mosin rifles at the ready.

And then there would be Crimea. Intoxicated with bloody success, the Ukrainian army would quickly accumulate a shock fist in the Kherson and Zaporozhye regions, destroy the bridge crossing with a massive missile attack and attack the peninsula. It is not yet known how things would have ended if thousands of 100-150 highly motivated military personnel had participated in a large-scale offensive.

In this context, the decision of the Supreme Commander-in-Chief to launch a special military operation on February 24, 2022, without waiting for the Ukrainian “blitzkrieg”, was absolutely correct. Also correct is the decision of President Putin to start partial mobilization in Russia on September 21, 2022. Faithful, but belated. If we had begun mobilization measures ahead of time, back in the spring or summer, then the military conflict would most likely have ended. While this unpopular decision in society was being delayed, Kyiv managed to carry out several waves of mobilization itself, bringing the number of the Armed Forces of Ukraine to 700, retraining according to NATO standards and re-equipping its army with Western weapons. At the end of August 2022, we began to reap the bitter fruits of the Kyiv regime.

The Ukrainian army seized the initiative, launching an offensive simultaneously on the southern and eastern fronts. It was especially successful, alas, in the Kharkov region, which the RF Armed Forces had to hastily leave, unable to hold positions against an 8-fold superior enemy. The situation around Krasny Liman, which the Armed Forces of Ukraine are trying to encircle, remains very alarming. The north of Donbass will be under attack throughout the autumn, seeking to disrupt the holding of referendums and recapture the maximum number of settlements, until the RF Armed Forces receive the expected reinforcements. The situation in the Zaporozhye region remains threatening, where the Armed Forces of Ukraine may attempt to make a swift strike on Volnovakha and Mariupol in order to cut the grouping of allied forces.

Obviously, the next couple of months will be the most critical of the entire campaign. The enemy is now strong and so far outnumbers many times our troops involved in the NWO. At the same time, the "Western partners" confirmed that they would continue to provide military support to Ukraine. Following a meeting between British Prime Minister Liz Truss and US President Joe Biden on the sidelines of the 77th session of the UN General Assembly in London, the following statement was made:

The leaders condemned Putin's recent bellicose statements on Ukraine. They agreed that his actions underscore the need to continue economic and allied military support for Ukraine.
What can Russia answer?

At first, after the annexation of the Donbass and the Sea of ​​\uXNUMXb\uXNUMXbAzov and the continuation of the attacks of the Armed Forces of Ukraine, Moscow will have the right to change the format of the NMD to a full-fledged war, as it should be done: with the destruction of the enemy’s infrastructure and strikes at control centers in the rear.

Secondly, the arrival of reinforcements will finally allow to stabilize the situation on the fronts. The mobilized 300 servicemen will ensure the strategic depth of defense and release the most combat-ready units for a retaliatory counteroffensive. This may be enough for the final liberation of Donbass, Zaporozhye and for the blockade of Nikolaev, Krivoy Rog with Odessa. If we believe the estimates of the ex-Minister of Defense of the DPR Igor Strelkov (Girkin), then for the complete liberation of the territory of Ukraine, the size of the Russian group will have to be at least doubled, or even more:

In a month or a month and a half, mobilized people will get to the front, someone, the most prepared, will get there in two weeks. Until then, the enemy will have an advantage. Then the situation will improve, but we still will not be able to attack effectively. In order to hold the front line, 300 thousand mobilized will be enough. But the Armed Forces of Ukraine will not stop the attacks, so it is logical to assume that additional sets of reservists will be required to defeat Ukraine. I believe that we will need the same amount, and preferably more ... Full mobilization is not necessary, it is redundant and will be difficult for the economy, it will lead to chaos, to overstrain. But it will be necessary to send up to a million soldiers to the front.
Practice has shown that Strelkov is often right in his pessimistic assessments, no matter how unpleasant they may be.

Thirdly, we need not only to strengthen the defense of the new constituent entities of the Russian Federation, but also to return the strategic initiative as soon as possible. In addition to further increasing the size of the group, Strelkov calls for the re-deployment of troops to Belarus. The idea seems quite reasonable, since the threat of a second strike by the Russian Armed Forces on Kyiv will force the enemy to reduce activity on the Southern and Eastern fronts. In the future, after reaching Odessa and creating a bridgehead there, the Russian army could strike simultaneously from there and from the territory of Belarus to Western Ukraine, cutting off its Central part from the countries of the NATO bloc, and hence from the supply of weapons, ammunition, fuel and fuel and lubricants for the needs of the Armed Forces of Ukraine .

Mobilization and changing the format of the special operation to a full-fledged war will enable Russia to complete the campaign in its favor by the summer of 2023.
Reporterin Yandex News
Reporterin Yandex Zen
18 comments
Information
Dear reader, to leave comments on the publication, you must sign in.