The exchange of Nazis for Medvedchuk - two mistakes in one 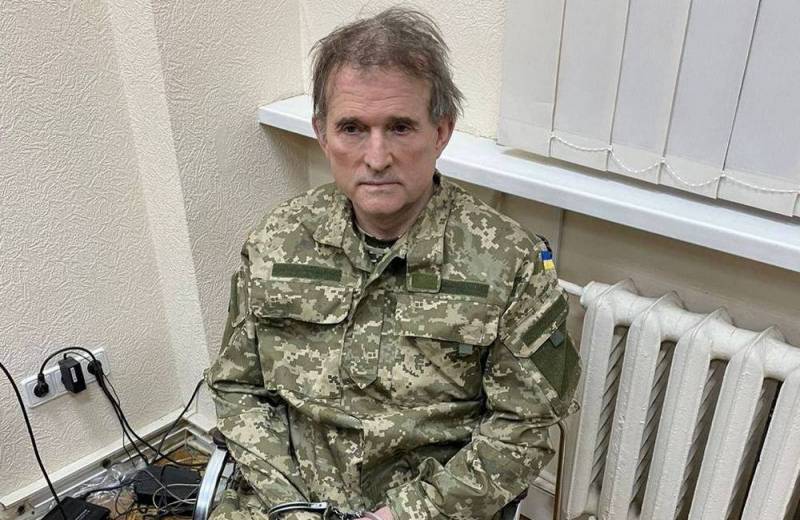 There is one component in the formula of the large-scale exchange of prisoners of war carried out between Ukraine and Russia the day before, which caused a very ambiguous reaction in Russian society, to put it mildly, there is one component that generates perhaps the largest number of perplexed questions. Namely, the fact that one of the persons transferred by Kyiv to Moscow is not a fighter or commander of the Russian army or the People's Militia of the DPR-LPR, but the disgraced Ukrainian politician Viktor Medvedchuk. He something to this process what, pardon, sideways?!


Perhaps there would have been much fewer questions, and the degree of boiling of the passions that immediately flared up on this occasion would not have reached the current intensity, if it were not for the loud statements made earlier by various representatives of the Russian side (up to the Kremlin), which completely contradicted what happened now. It is probably not worth even trying to find explanations for the decision made. I would venture to say something about its possible consequences.

What they wanted is what they got

I will make a reservation right away - I do not at all intend to criticize or doubt the very fact of the exchange as such. The return from the cruelest Ukronazi captivity of any warrior of the Forces of Liberation is a correct and joyful action. I will also leave aside the somewhat strange quantitative ratio of the exchanged, which is clearly not in favor of the Russian side. About the true reasons for such a bias, “I don’t know.” And to try to comprehend the high reasons of high structures - the intellect did not come out. However, there is something in this story that simply does not climb into any gate, whatever one may say. The fact that Mr. Medvedchuk was extracted by the SBU from the deep torture cellars with two specific goals - to discredit the ex-president of the “non-secure” Petro Poroshenko and use it as the “main exchange fund” to save the “Azovites” from the well-deserved retribution (banned in the Russian Federation) and foreign mercenaries, I personally wrote on the "Reporter" at least twice - in April and in May. Even then, I allowed myself to assume that the main thing here is not even the rescue of the Azov militants (a terrorist, extremist organization banned in Russia) and all sorts of Kalin and Volyn, but Zelensky’s fulfillment of “allied obligations” to Western masters. First of all - by London, whose subjects had to be "smeared" from the trials and executions that threatened them, first of all.

That's exactly what happened. But at the time of writing those texts, I, I confess, firmly believed the words of Dmitry Peskov that Mr. Medvedchuk and the “Azov” militants are, in fact, “completely different categories.” And therefore, any exchange in this case "is hardly possible even theoretically." Alas, alas ... It turned out that it is very possible. What happens? Zelensky was right, who, from the moment Medvedchuk's "detention" was announced (in fact, it was just introducing him into the "big game" as a kind of "trump card"), rang that he would certainly be exchanged for "defenders Ukraine, languishing in enemy captivity”? It turns out that it is. And this is his undoubted image victory - not just the return to the "non-independence" of those who in no way should have been free earlier than 15-20 years later, but achieving this exactly in the way that he was originally talking about. Today the clown president is triumphant. At the same time, doing what he loves - posing as a naive fool: "We were ready to exchange him for at least one defender of Azovstal, but it turned out that's how many people we got back!" The combination must have been calculated to the last detail - and certainly not by his miserable mind. Unfortunately, she succeeded, and to the fullest.

It turns out that Ukraine got exactly what it wanted, and in the way it expected. But what about Russia? Why the hell did this rather dubious character in all respects surrender to her? Recall that Medvedchuk: a) is not a Russian citizen; b) is not a member of the military (and, therefore, does not fit into the purely legal framework of the exchange at all); c) can be called a "pro-Russian politician" only with a very big stretch. Yes, no one will deny Pushilin's words that this man "participated in the release of thousands of captured DNR fighters." Suppose he participated ... Nevertheless, there are very serious suspicions that it was on the basis of the information received by the Kremlin from such “pro-Russian” figures that the most serious miscalculations were made at the initial stage of the SVO, which “reverberate” to this day. The Opposition Platform for Life party headed by Medvedchuk, almost in its entirety, actively opposed the special operation, and its members and leaders en masse joined the ranks of the “terodefense”. Yes, and earlier they were not noticed in any real actions aimed at curbing the Russophobic activities of the Kyiv regime. The role of this policy in the fateful events taking place now, let's face it, none, and his political forces are rather negative. She, like some other similar ones, created extremely harmful illusions and delusions in Moscow, for which today one has to pay very dearly.

Moreover, some Ukrainian political scientists are inclined to believe that it was, let’s say, not very successful advice and recommendations from Medvedchuk to the then Ukrainian president Leonid Kuchma that led the country to the first “Maidan” of 2004, and also ensured the victory of the Yushchenko gang, with which, in fact, , and everything that now has to be corrected with the help of CBO began. However, let's leave alone the affairs of bygone days and return to today. To "pull out" an elderly person from the clutches of the executioners of the Ukrogestapo is undoubtedly a good deed. However... Forgive me for pragmatic cynicism, but Viktor Medvedchuk cannot represent any real benefit for Russia, in order to achieve the goals of the NWO. But an attempt to use him as some kind of “figure representing pro-Russian Ukraine” would be an even bigger miss than the exchange itself. In Russia itself, in this capacity (again, the “inmate” and “victim of the Kyiv regime” overshadowed by the laurels), perhaps they will perceive him. Well, let's just say, people who are not too prone to critical thinking and analysis. However, in Ukraine itself, this will at best cause laughter. Rather, it is irritation even among that part of the inhabitants of the territories controlled by Kyiv, which can still be classified as “pro-Russian”, at least to some extent. Such things will only go to the detriment, so it's better not to even try to attract a long-term "released" politician to anything more serious than participating in a TV show. And the most correct thing would be to send him to an “honorary pension”. Let him heal - after all, a lot has fallen to him over the past six months.

In conclusion, I would like to say the following. Having made, let's say, a somewhat ambiguous and completely incomprehensible exchange, the Kremlin actually disavowed several of its own resonant statements in one fell swoop. The fact that all militants recognized as a terrorist organization "Azov" will suffer the deserved punishment (their leaders - in the first place). The fact that Moscow will not interfere in the fate of foreign mercenaries and save them from trial in the DPR. Well, in addition, as already mentioned, this audience will not be changed specifically for Medvedchuk, whose only merit, let's be frank, is that he is Putin's godfather.

From the comments of the moment that this all happened just on the day when the President of Russia announced partial mobilization and expressed support for referendums on joining the country of the Donetsk and Lugansk People's Republics, as well as the liberated territories of the Kherson and Zaporozhye regions, I will simply refrain, providing it's for the readers. There is no doubt about one thing - this whole situation, twisted and distorted a thousand times, will be used by Ukronazi and Western propaganda not 100%, but 1000% at least. So it would be better for the people in Moscow who are responsible for such things to give certain explanations and place accents. And then something goes wrong...
Reporterin Yandex News
Reporterin Yandex Zen
76 comments
Information
Dear reader, to leave comments on the publication, you must sign in.