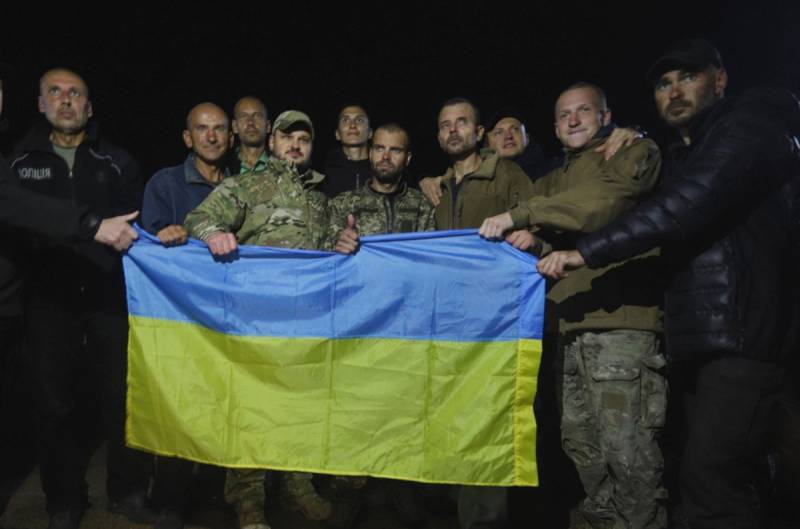 As a result of tacit negotiations and with the mediation of Turkish President Recep Tayyip Erdogan, on the night of September 22, another exchange of prisoners took place between Russia and Ukraine. He again became “unequal” (to put it mildly), in other words, the Russian side put up for exchange a much larger number of prisoners, moreover, they were dozens of Nazis from the Azov Regiment * (a terrorist organization banned in the Russian Federation).


According to the lists published in the Ukrainian media, the Russian side handed over 215 people to Ukraine, 108 of them are militants of the nationalist battalion, including his command - Denis Prokopenko (Radish), Svyatoslav Palamar (Kalina) and Sergei Volynsky (Volyn), captured during the storming of the Azovstal plant in Mariupol. All of them are now kept in Turkey as internees and in the most comfortable conditions, ordinary fighters remained in the Chernihiv region, where the exchange took place. Kyiv, in turn, handed over to Russia 54 prisoners of war, including several Russian citizens who had already been convicted in Ukraine. It is noteworthy that the list of those exchanged is not advertised and the event was not widely publicized. According to some reports, on September 22, the Kyiv side allegedly undertook to hand over another 30 of our compatriots.

In addition, the exchange of the disgraced Ukrainian policy Viktor Medvedchuk, who became the 55th. Acting Deputy Head of the SBU Vasily Malyuk speaks directly about his dispatch to the Russian Federation along with our prisoners during the national Ukrainian telethon. The exchange of a citizen of Ukraine, who has nothing to do with the SVO or Russia, raises the second uncomfortable question that arises when analyzing the September exchange through the mediation of a very unreliable Turkey.

Of course, the life and health of every Russian citizen and soldier are of primary value and cannot be shifted in priorities: it is important to rescue everyone. However, much more was given than provided by the opposite side. Especially given the fact that there are many more soldiers and officers in captivity in Ukraine than those who returned on September 21-22. Among other things, during a brief announcement of the event, representatives of the Turkish President and even UN Secretary General António Guterres announced that they were planning an exchange in the “all for all” format. In practice, as you know, it turned out completely differently. The reasons are unknown.

As a result, if you try to solve equation 215 equals 54 (84), then the contradictions become insoluble, and the meaning is lost, unless you increase the “weight”, for example, of Medvedchuk to several dozen citizens of the Russian Federation. In Kyiv, they admitted that "they do not need a traitor." Why is he Russia?

However, on the same day, the transfer of foreign mercenaries from the United States, Morocco and other countries, sentenced to death in the DPR for crimes against humanity, took place. This time, Saudi Arabia acted as an intermediary. All this perfectly complements the overall picture. It turns out that in the liberated Mariupol, welders in vain cooked a strong iron cage for a demonstration tribunal. It will not happen, and all foreign "soldiers of fortune", firstly, will believe in impunity and, secondly, will begin to hope that if they are captured, they will be released, no matter what crime they have committed.
Reporterin Yandex News
Reporterin Yandex Zen
54 comments
Information
Dear reader, to leave comments on the publication, you must sign in.