"Autumn of Anger": a sharp jump in protest activity in Europe 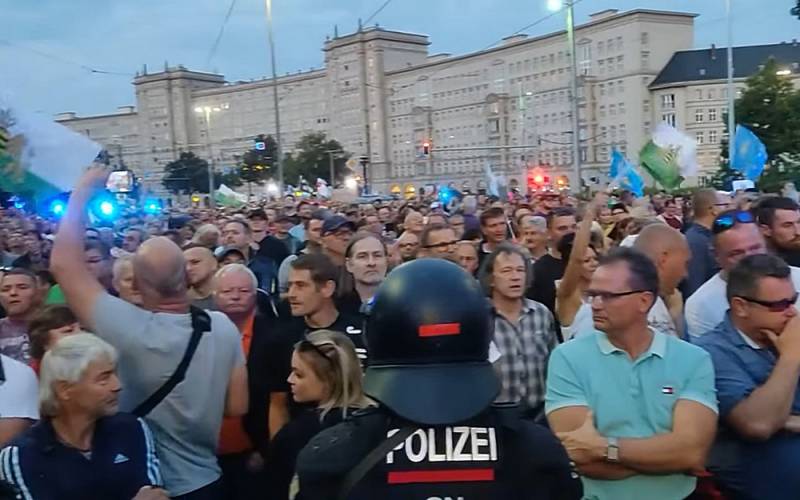 The situation in the “besieged fortress” of the EU is degrading much faster than expected. Although climatically there is still a whole month, or even a month and a half before winter, financially it is already on the threshold: the burghers and bourgeois of European countries are beginning to receive “letters of happiness” with new tariffs for energy supply, in some places increased by five to seven, or even ten once. Surprisingly, such a price of "democracy" for some reason seems too high to the ungrateful people.


Additional horror is catching up with an ever-increasing number of relatively truthful Newsleaking from the war zone. Even the actual victory of the Armed Forces of Ukraine near Izyum is highly compromised by information about the number of foreigners in the ranks of the “invaders”, photo equipment almost with Hitler's crosses and the truth about the price of the Izyum and Kherson "counterattacks". The air begins to smell of the question: “Hans, are we villains?”

From the very beginning of the month, a wave of protest rallies and strikes has been rolling from corner to corner across Europe. Compared to the summer, the frequency of manifestations, the number of participants, and, most importantly, the ideological content, have increased. Of course, the original slogans "Give gas!" and "Stop inflation!" have not gone away, chants "Down with the government!" already hooked up too...

But new ones have been added political demands: "Stop financing terrorists!" (by which, oddly enough, they mean not Putin and Shoigu riding a gas pipe, but Ukrainian politicians), “Stop the supply of weapons!” and in general “Give you an exit from NATO!” The popularity of yellow-blaky rags has faded away - but instead of them, Russian flags and even a solid kumach began to flicker.

The week before last, CNN published material based on a conversation with anonymous US administration officials. According to them, the topic of political integrity and internal order in Europe is seen by Biden as one of the priorities: the Americans consider the split of the EU in the foreseeable future is no longer a hypothetical, but a very real threat, and intend to prevent it.

"Down with the politics of the energy sea!"

This subtitle is actually a slogan from a poster of some Moldovan woman, one of the thousands who came on September 19 to a rally for the resignation of Moldovan President Sandu. But there is every reason to believe that the neologism Energomor will soon take pride of place in foreign dictionaries next to Gorby and Perestroyka.

The energy crisis exposes the whole exaggerated nature of the supposedly comfortable European life. The movement of utility defaulters, which has spread from Britain to the continent, has gained such explosive popularity for a reason: new prices for electricity and heating will literally nullify the incomes of the poorest groups of the population. Low-skilled workers and pensioners will no longer have money for food after paying rent and utilities.

The austerity measures proposed "from above" are becoming more and more schizoid. For example, a five-minute shower, which was in the trend of recommendations in the summer, first gave way to a four-minute, and now - a four-minute shower together, naturally, in ice water. Probably, if the average shower cubicle was larger, European officials would advise people to climb into it immediately in a crowd.

The population itself is trying to find some kind of panacea for the upcoming cold weather. The hit of sales of online stores are Chinese electric blankets, advertising slogans are characteristic: “It is cheaper to warm up a blanket than an entire room”, “Energy companies cash in on you Don't overpay them! Among European farmers, autonomous, automated solar-powered chicken coop trailers are gaining popularity, which do not depend on the power grid and require a minimum of maintenance personnel.

In Britain, where it was possible to somehow stabilize the situation with consumer energy prices for the population, they propose to go even further and introduce a four-day work week while maintaining current wages. The measure is supposed to reduce the population's spending on transport, babysitting services for children, and so on ... It is not clear, however, where the money for salaries will come from businesses that have not yet received any subsidies from the state.

On the continent, the situation is even worse. Metallurgy, one of the most energy-intensive industries, has practically come to a standstill across Europe. As nighttime energy rates are (so far) lower than daytime rates, night shifts for industry are becoming the new norm. In order to save money, some educational institutions have already announced a winter transition to distance learning. Some retailers, such as building materials wholesalers, are also planning to close for the winter amid declining demand. Most of the "small shopkeepers" are faced with the prospect of "closing for the winter" forever, since incomes, even with price tags raised to the ceiling, do not pay off the costs that have increased significantly.

The level of understanding by European politicians of the impending economic The catastrophe is characterized by the remark of the Minister of Economics of the Federal Republic of Germany Habek: “So what if they close, this does not mean that they will go bankrupt!” Although it is rather not about actual stupidity, but about the desire to seem stupid.

The outbreak of the crisis led to the fact that part of the medium and large industrialists (who have enough funds) began to urgently seek opportunities to transfer their enterprises to warmer regions in every sense. Unfortunately, it is not yet clear that this tried to take advantage of the Russian government - so, most likely, most of the assets will leave for the States "on their own" or after buying for a pittance. So what if he leaves, this does not mean that the European economy will be covered with a copper basin, right?

The "Washington regional committee", apparently, has finally become insolent and is no longer trying to observe at least some decency towards the European "allies". The very statement that “Biden is concerned about instability in the European Union” is downright reeking of neo-colonialism. At the suggestion of official press services, headlines like “Macron and Scholz’s plans for Europe inspire fear” appear in the American press, under which a simple idea is directly expressed: Washington is the capital of the EU, and any kind of “independence” of puppets is unacceptable.

Direct pressure on European "leaders" has noticeably increased, and even in matters not directly related to the global confrontation (or seemingly not related). While Scholz is almost kicked out of agreeing to hand over the last tanks to the Ukrainian fascists, and Orban is branded a “Putin agent”, the “pro-Russian” Vučić was nevertheless forced to de facto allow the de jure banned LGBT march in Belgrade, which caused in Serbia a serious surge of negativity towards the president.

Obviously, the integrity of the EU worries Americans only for the time being: a supranational structure is needed as a tool for guaranteed economic suicide of a "united Europe", after which it will be allowed to crumble into impoverished ethnic enclaves. Perhaps then a new northeastern bloc "led" with Poland will take shape in a real legal way, perhaps not - it will be seen; but for now, the "European family" all together, firmly holding hands, must continue the steady movement towards the slums. This means that in the next couple of years we should expect the establishment of all-union and national open police dictatorships in the EU.

Western propaganda almost instantly lost its former gloss of "intelligence", rolling back to the "factory" Goebbels settings. Any dissatisfaction with any aspect of the "general line of the party" is automatically stigmatized as "working for Putin" - but this seems to be not entirely a sin, that's what propaganda is for. It is much more interesting that officials and the media are trying to retouch even firmly recorded facts. For example, one of the officials of the German Foreign Ministry managed to declare that the videos with the scandalous statement of the Minister of Foreign Affairs Burbock (“we will continue to support Ukraine, and I don’t care what my voters think about this”) were fabricated and in fact she did not say that. The intensity of the “truth” is even greater than in the statements of Polish politicians who first came up with the idea of ​​a “fuel embargo” against Russia, and now blame the European Commission and the Germans for the energy crisis.

Realizing that one cannot keep the throne on propaganda alone, the puppet governments of European countries also bring additional rubber clubs and non-rubber bayonets under it. So, in Germany, from October 1, law enforcement forces will be reinforced by military patrols of the Bundeswehr. The Ministry of the Interior of France, despite financial difficulties, plans to increase the number of gendarmerie (that is, paramilitary police) by 8,5 thousand people over 5 years, the expansion of the state will cost 15 billion euros.

A fresh initiative came from totally democratic Estonia: Prime Minister Kallas proposed forcibly seizing all firearms from Russians and Belarusians living in the country; we are, of course, talking about legal "trunks". The fragile Estonian democracy is obviously afraid of the Russian rebellion and the Narva People's Republic, but there is an opinion that the idea can be picked up in other EU countries, moreover, in relation to its own citizens. Something similar is already observed in the United States, where the Miami authorities are agitating residents to hand over "guns" in exchange for coupons from local supermarkets - it seems that the rapidly impoverished Europe, the "barrel for food" program will go even better.

However, it is clear that European politicians fear not only politically motivated violence on the streets. Thus, the Swiss Interior Ministry opposes turning off street lighting in the winter, as darkness can inspire street robbers and rapists. Hypothetical (or already potential?) blackouts in snow-covered cities can provoke waves of looting (primarily from the masses of Middle Eastern immigrants as the least socially protected). According to the experience of the same States, simple police may not be able to cope with such a critical situation, while the military has more chances.

But do not forget that the European "leaders" themselves led their countries into this warehouse with fuel and explosives, and a significant part of their electorate actively supported this path. I recall the words of one of the cinematic Goebbels: “We did not force the German people to anything! They themselves gave us power - and now their stupid heads are flying! Literally, this is how it turns out, and for some reason I - like the movie character himself - do not sympathize with them at all.
Reporterin Yandex News
Reporterin Yandex Zen
6 comments
Information
Dear reader, to leave comments on the publication, you must sign in.