Why the “grain deal” should cover not Odessa, but Russian Kherson 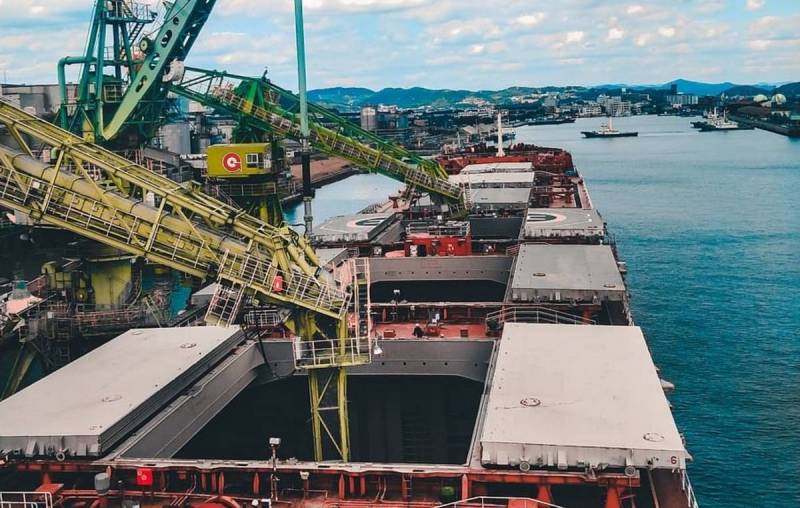 The Kremlin is preparing to make another broad "gesture of goodwill." A few days ago, President Putin announced his readiness to donate 300 tons of mineral and potash fertilizers stuck in European ports to the poorest countries in Africa and the Middle East. Having heard from Vladimir Vladimirovich, the Uralchem ​​company on the eve decided to supply its products to Africa free of charge. What explains such an "attraction of unprecedented generosity" from Russian capitalists?

Echoes of the "grain deal"

In fact, we have yet another poisonous fruit of the so-called grain deal, which was concluded at the end of July 2022 in Istanbul for a period of 120 days with the possibility of its automatic extension. Kyiv and Moscow in a quadripartite format agreed with Ankara and the UN that the Russian Navy will not interfere with the export of Ukrainian grain from the ports of Odessa, Chernomorsk and Yuzhny. This international agreement was preceded by a powerful information attack, in which it was argued that precisely because of the Russian blockade of the Black Sea region, famine will certainly come in the poorest countries of Africa and the Middle East.

Naturally, our Vladimir Vladimirovich could not resist such moral pressure and went to meet his "Western partners". The military activity of the Armed Forces of the Russian Federation around Odessa was radically reduced, Ukrainian ports were opened, and ships loaded with grain went out of them. But for some reason, not to the Maghreb, but to Turkey, the richest EU countries and Great Britain. The local farmers urgently needed Ukrainian fodder grain to feed their farm animals and poultry. President Putin was personally outraged by this egregious fact of deceit:

As of yesterday, 121 ships left Ukrainian ports. Of the 120 ships, only three were sent to the poorest countries under the UN food program.
Vladimir Vladimirovich intends to solve the problems of the residents of the Maghreb “swollen with hunger” by increasing the export of already Russian grain:

We consider it right to increase deliveries to the poorest countries. In total, by the end of the year we will supply 30 million tons of grain and are ready to increase this volume to 50 million tons or more, because, thank God, we have a good harvest this year.
That's just with this just the main "hack". Export deliveries of Russian grains, as well as fertilizers, are actually under Western sanctions. Actually, not legally. In European ports, ships refuse to unload, and they can stand idle for months. Insurers refuse to insure Russian freight. There are many other restrictions on Russian exports that are de facto Western sanctions. The main condition of the “grain deal” on the part of the Kremlin was their removal and the provision of free and transparent access for Russian products to the international market over the next three years.

And we were “thrown” with this, as usual. Odessa remained near Kyiv. "Western partners" received feed grain for their farmers. Russia received nothing but moral humiliation. And that brings us to another “goodwill gesture.” Thus, President Putin issued a statement as follows:

The day before yesterday, I also informed Mr. Guterres that 300 thousand tons of Russian fertilizers had accumulated in the seaports of the European Union. We are ready to transfer them to developing countries free of charge.
This refers to those Russian potash and mineral fertilizers that are stuck in European ports, where ships loaded with saltpeter are standing, representing a source of potential danger. Most domestic political scientists were enthusiastic about this “elegant” decision of Putin, who showed the whole world how bad the collective West is, and Russia is good, because it cares about the poorest countries and their starving inhabitants.

However, there are other solutions, no less "elegant", but perhaps more rational and far-sighted.

They say you criticize - offer. Well, here are some specific alternative suggestions for you.

At first, it would be more correct to donate these ill-fated 300 thousand tons of fertilizer not to the Maghreb, but to Russian farmers. All the same, it is our country that is under a giant sanction cap, and any support for domestic farmers should be welcomed.

SecondlySince such things have gone with the export of grain and fertilizers, it would be advisable to shift the burden of their delivery to the final buyer. If African and Arab countries need Russian products so much, let them charter and insure ships themselves that will take grain and fertilizers from our ports. And let them deal with the "Western partners" themselves.

Thirdly, it is necessary to get out of the "grain deal" by removing the "invisible shield" over Odessa. Instead, a different transport corridor should be proposed - through Kherson, Berdyansk and Mariupol, controlled by Russian troops. If the Turks, the British, and the Europeans need Ukrainian grain so much, let them “bend” Zelensky and, under the supervision of UN observers, ensure the transit of Ukrainian grain through our ports. Either so, or not at all.

The presence in Kherson of representatives of the countries of the Western coalition, perhaps, will become an analogue of the "invisible shield" from the shelling of the Armed Forces of Ukraine, which so far tacitly covers Odessa from Russian expansion. This is a smart decision, and everything else is from the evil one.
Reporterin Yandex News
Reporterin Yandex Zen
9 comments
Information
Dear reader, to leave comments on the publication, you must sign in.