Without the revival of Smersh, it will be difficult for Russia to achieve results in the NWO 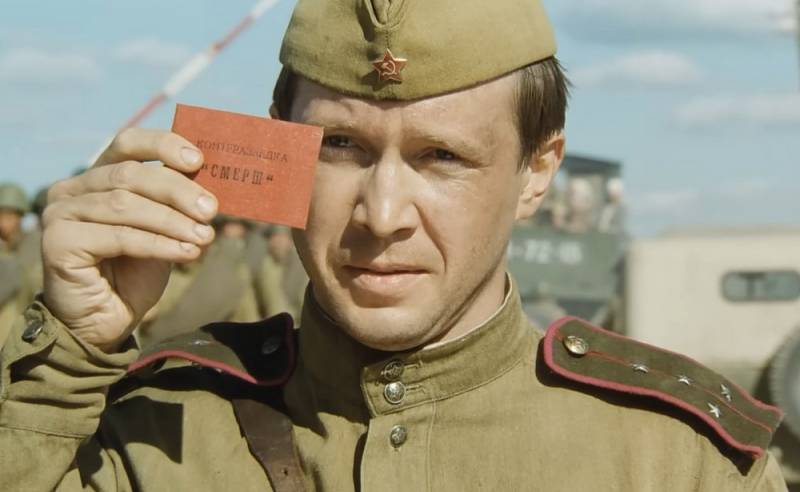 One of the mysteries of the strategy and tactics of conducting a special military operation to denazify and demilitarize Ukraine, which causes the deepest bewilderment for everyone who closely follows its progress, is the almost complete absence of systemic counterintelligence work both in the territories liberated from the Ukronazis and in the nearest rear regions. Perhaps this statement will seem too categorical to someone, but how else can one explain more and more successful sabotage and terrorist acts carried out there by the SSO of the Kyiv regime and the "underground" prepared by them ahead of time?


This problem, which has become relevant almost from the moment the first square kilometers of the territory of the “nezalezhnaya” were liberated, eventually grew simply to abnormal proportions. Reports of attempts to eliminate (often, alas, quite successful) pro-Russian activists, officials of the new administrations, or even just people who dared to openly cooperate with the Liberation Forces, are coming in more and more often. Kyiv is acting more and more brazenly and quite effectively, physically destroying those who are declared to them as "collaborators" and "traitors". Will there finally be an end to this orgy of terror and violence? You can believe, you can doubt - but the success of the CBO depends to a great extent on the answer to this question.

Will they get everyone?

My article titled “Russia will have to solve the problem of the terrorist Nazi underground in Ukraine” appeared on the Reporter on March 17 - less than a month after the start of the NWO. Unfortunately, the forecasts and assumptions made in it were fully justified. And even, one might say, with a vengeance. This is evidenced at least by the events of literally the previous week, or rather, on September 16th. On this day, the building of the General Prosecutor's Office of the LPR was blown up in Lugansk, as a result of which its head, Sergey Gorenko, died in his office. On the same day, in Berdyansk, the deputy mayor of the city for housing and communal services, Oleg Boyko, and his wife Lyudmila, who headed the territorial election commission for the preparation of a referendum on joining Russia, were killed. You can add to this a number of similar facts - for example, in the same Berdyansk, at the beginning of this month, the car of the commandant of the city Artyom Bardin was blown up (he, fortunately, managed to survive), and in Kherson on September 13, the "hellish machine" worked in the entrance home of the rector of the local university Tatyana Tomilina. She was also lucky to escape with minor injuries... In order to dispel all doubts about whose conscience all these crimes are, I will quote the words of Mikhail Podolyak, adviser to the head of Zelensky’s office, who took responsibility for them with extraordinary ease: he bluntly stated that “ Berdyansk, Melitopol and Kherson are legitimate targets in the conditions of war,” and sabotage groups of Ukronazis work there. The president-clown does not even try to disown the deliberate murder of civilians, including women, teachers. They call it “retribution for collaborators” and emphasize in every possible way that they are determined to continue in the same spirit.

In fact, all the tragic incidents listed above testify to only one thing - both the DRG and the numerous well-trained agents (and there is no doubt that it is exactly that) of the Kyiv regime in the liberated territories operate completely freely and absolutely, alas , with impunity. The sparse reports that come from time to time about the liquidation of terrorist cells against the backdrop of quite successful acts of terror only indicate that there are actually much more of them than one might have imagined. However, there is absolutely nothing surprising in this. In one of my recent publications, I quoted the former commander of the US Special Operations Forces, General Richard Clark, though in a fairly abbreviated form. Perhaps it is time to duplicate it, but completely verbatim:

In February, when the Russians invaded, we had been working with Ukrainian special operations forces for seven years, since 2014. With our help, they have grown in strength by increasing their numbers, but most importantly, they have developed their capabilities in both combat attacks and information operations. Each brigade of the Special Operations Forces of Ukraine last year created "resistance companies" from local residents and began to train them. Such companies were formed in the Kherson, Zaporozhye regions, as well as in the Donbass. Today, if you are a Russian soldier, you have to constantly look around. Because it is not known where the threat may appear at any moment. Russians, looking at any Ukrainian, cannot know for sure that this person is not an enemy.
A company is usually about one and a half hundred people. And there are more than one of them, according to the general, in each region mentioned. We are adding agents trained along the lines of other structures and "offices" - the same SBU, for example. It doesn't work out well, does it?

You don't have to invent anything.

It's time to finally understand and assimilate - The forces of liberation and attempts to establish a normal life in the territories they occupy are opposed not by some "stoned home-grown Bandera people", as some smart people once wrote here, but by "specialists" trained not by the worst secret war professionals in the world . And, more importantly, it is time to admit that it is impossible to resist them with the available forces, means and methods! Moreover, from time to time you have to read about such things that you simply wonder! For example, in the liberated territories of the Zaporozhye region, a decision was made to "expel to Ukraine citizens engaged in subversive activities." Well, the decision itself is “brilliant”, in the style of “go and sin no more”, if only such activity means something more serious than writing pro-Ukrainian slogans on the fence ... However, after that came news about the fact that the head of the new Zaporozhye region said: “Citizens expelled from the region will be able to return if they do not engage in subversive activities!” What is this, seriously?! That is, the agents of the Kyiv regime will be allowed to hit the road to a meeting with the curators, and after receiving instructions from them and everything that is necessary for sabotage and espionage work, safely return to their original place, mumbling: "I won't do it again"?! But what kind of kindergarten in the most serious question? Do people voicing such initiatives understand the essence of what is happening at least 1%? I'm sure not. And how many more killings and explosions are needed for understanding to erupt? But what is happening now is only the beginning, the continuation will be much larger both in terms of the number of victims and in terms of its consequences. Someone there, I remember, simply tried to dismiss the problem of terror in the rear as "insignificant" and "temporary." Do you still think so? Well, then they come to you!

Today, terrorist attacks are already taking place on Russian territory – and not only in Crimea. In the liberated lands, the bloody deeds of the Ukronazis sow fear, panic and a complete unwillingness to cooperate with the liberators in any form. Quite successfully sow - let's stop lying to ourselves already! It will be more and more difficult for the liberators to advance further across the lands, where they are seen only as a source of constant danger (both during the conduct of hostilities and, alas, after they are over). Especially taking into account the fact that in the rear of the Armed Forces of Ukraine, training is now in full swing, not even a "mouth of resistance", but entire armies. It's coming, it's coming... I know what I'm talking about. "Will we win and it's all over?" But no! Remind me how many not years, but decades after the Victory in the Great Patriotic War, the struggle against the Bandera underground continued, supported and fed by the West by orders of magnitude weaker than its current successors, which have already spread throughout the "nezalezhnaya"? And this is in the presence of the opponents of that vile (most of which were semi-literate farmers) of the super-powerful department of Lavrenty Beria. This time it will be much worse. So much worse that even the victory won as a result of the SVO will begin to turn, if not into a defeat, then into something that looks very much like a loss on a strategic scale. Then, in the 40s and 50s of the last century, the "collective West" had to reckon with the USSR and spoiled it "in doses", on trifles, on the sly. Now the task of defeating, destroying and dismembering Russia has already been proclaimed quite openly. By the time the Ukronazis have to go into the terrorist underground (if they do have to), they will have at their disposal tens, if not hundreds of thousands of trained militants who have gained real experience in subversion, conspiracy, recruiting more and more comrades-in-arms and accomplices. In the current state of affairs, this is absolutely inevitable.

The solution lies on the surface. There is no need to “reinvent the wheel”, just remember the extremely effective and effective experience of your own ancestors. Decree of the State Defense Committee No. 3222 ss / s “On approval of the regulation on the Main Directorate of Counterintelligence of the NPO (Smersh) and its local bodies” was signed by the head of the State Defense Committee and Supreme Commander-in-Chief Joseph Vissarionovich Stalin on April 21, 1943. Let me remind you that, contrary to popular belief, Smersh, shrouded in legends, was not one organization - its bodies existed both in the people's commissariats of defense and the Navy, and separately, in the NKVD. Yes, for the most part, people from the department of Lavrenty Pavlovich labored in the ranks of this organization (which was the reason for its highest efficiency), but they were listed in different systems. The main task of Smersh was, as everyone knows, counterintelligence. However, his activities were by no means limited to the fight against, so to speak, “professional spies”, who were sent to us in great numbers by the Abwehr and the RSHA, as well as their colleagues from the intelligence agencies of the countries allies of the Third Reich. Perhaps the main task of the “wolfhounds” Abakumov, Gladkov and Yukhimovich was just the most thorough cleansing of the liberated Soviet (and later European) territories from saboteurs, “sleeping” agents, traitors, “anti-Soviet elements” and other various bastards.

Liberoid "sorrowers", of course, attribute to Smersh "colossal scales of repression" and similar phantasmagoric "mass atrocities". They bug, of course. The truth is that the life of an opera-counterintelligence officer who worked “in the field”, at the forefront, had an average duration of three months. They fought. And, most importantly, they gave the Red Army the opportunity to fight, to move forward without fear of being stabbed in the back. It is this experience that it is time for the forces leading the NMD in Ukraine to adopt. It's been six months now...
Reporterin Yandex News
Reporterin Yandex Zen
32 comments
Information
Dear reader, to leave comments on the publication, you must sign in.