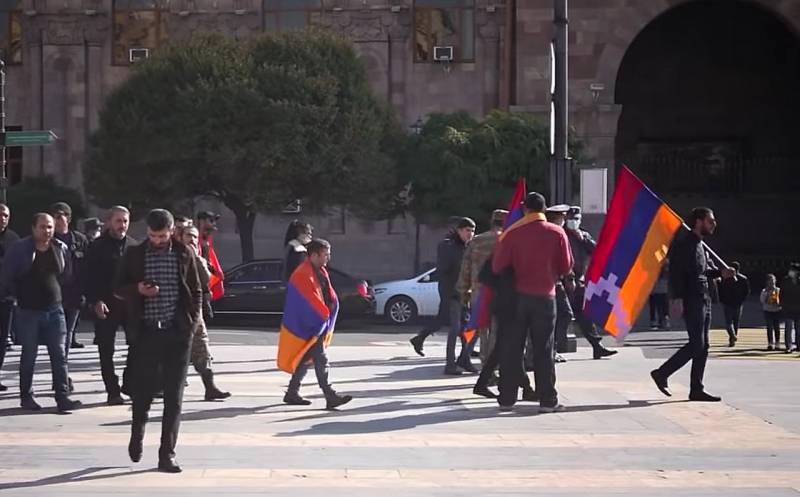 On September 17-18, Speaker of the US House of Representatives Nancy Pelosi visited Armenia. The visit, as is usual for the "Taiwanese grandmother", is ambiguous, pursuing several goals at once and worth at least to understand it more closely.

We are here to say that the US will support democracy in Armenia. In difficult times, we stand next to Armenia. When there is a struggle between democracy and autocracy, Armenia is the place where we can clearly see these contradictions.
Pelosi said during a speech in Yerevan.

All Armenians consider you a true friend of Armenia. (...) We see the willingness of the US government to support the democratic agenda of our country. I would like to express our commitment to the democratic reform agenda, despite the fact that, as you can see, this is not such an easy path
- Prime Minister of Armenia Nikol Pashinyan answered her.

At first glance, everything looks like another attempt by the United States to expand its influence in the post-Soviet space in the course of the rise of the part of the elite oriented towards America. Nevertheless, there are at least two true goals of such an open demonstration of US support for the current Armenian leadership. And none of them has anything to do with the well-being of Armenia. First, it is the desire to tear off an ally from Russia and strengthen American positions in the Transcaucasus. Secondly, the desire to punish Turkey for cooperation with our country.

Cut off Armenia from Russia

Armenia is one of Russia's key allies in the Transcaucasus. It has been a member of the CSTO and the EAEU since their foundation and after the collapse of the USSR remains one of the CIS countries most friendly to the Russian Federation. This went on for decades. In principle, this is how it is now, if not for the alarming trends that have begun to emerge in recent years. It all started with the fact that the democratically elected government of Serzh Sargsyan was overthrown in 2018 by Nikol Pashinyan and his supporters. Who usually helps to carry out coup d'état in the post-Soviet space is not difficult to guess.

Obviously, the coup d'état in Armenia was part of policy United States to reduce the influence of Russia in the post-Soviet space. However, that was four years ago. Today, when the struggle between the West and our country has escalated to the point of a hybrid war, Washington no longer hides the fact that the main goal is the complete isolation of our country. It is clear that it is impossible in principle to cut off the largest country on the planet from the outside world, but the Americans will certainly attempt to remove a number of post-Soviet republics from under the Russian orbit. And in the forefront of all these efforts, as of mid-September of this year, was Pashinyan's Armenia.

It is significant that on the day of Pelosi's arrival in Yerevan, a rally was organized by representatives of the European Party of Armenia, headed by its chairman Tigran Khzmalyan. A rally during which extremely provocative slogans were heard.

If we leave the CSTO and the EAEU, join NATO and the EU, then we will return our lost, our lands
- Khzmalyan said, dispelling all doubts about who organized the rally and what goals were set for him.

Although, according to an Interfax correspondent, only a few hundred people took part in this mass event. However, the lack of real support has never stopped Western agents of influence, the main thing is to show a beautiful picture from the right angle and it will already be possible to form the right impression. The impression the West needs.

At the same time, we must not forget that the prime minister approaching the United States enjoys such broad support at home that tens of thousands of people come out to regular protests against him, and the softest censorship characteristic that he is awarded there is “traitor”. But this is so, by the way. There will not be a single line about this in the Western propaganda media. What they will talk about is that the leadership of Armenia is ready to embark on the only correct path of “true democracy”. And the fact that the West is preparing a plan for the country to move away from Russia is undoubtedly a side effect. The State Department manual has not changed from the word “completely” since the Maidan. But this is only one side of Washington's multifaceted plan. The second part concerns Turkey.

The United States wants to punish Turkey for its independent position on the Ukrainian crisis and unwillingness to impose sanctions against Russia. This is the second factor that prompted Pelosi to fly to Armenia and start singing old songs about supporting democracy. At the same time, it is important to note that when Azerbaijan launched an offensive operation on the territory of Karabakh in 2020, the United States reacted in almost no way. They did not take any sanctions, any clear condemnation, any real measures to stop the war and bring the parties to dialogue.
Today, when the policy of Azerbaijan's key military ally, Turkey, began to irritate Washington with its willfulness, it decides to play the "Armenian card." But not in order to somehow help Armenia, no. Purely in order to find a reason to impose sanctions against Ankara, thereby putting pressure on Erdogan and forcing him to refuse cooperation with Russia.

Of course, a reasonable question arises: why can't the States impose secondary sanctions on Turkey now? Why complicate things so much? The answer is simple: they are afraid in Washington. They are afraid that Turkey's disobedience to direct punishment "for ties with Russia" may lead to a wave of anti-American demarches around the world. That is why the United States so needs an indirect mechanism of influence, which is not formally connected with Russian-Turkish relations, but unequivocally makes it clear to all players that the United States is still ready to bend countries to its will. Even such large ones as Turkey.

What would you like to say in conclusion. Ultimately, Russia needs to understand several aspects about Armenia. First, no matter how the West and its agents of influence try to distort the situation, the Armenian population sees its most important ally in Russia. So it was in the days of the Russian Empire, so it remains now. That is why it will be extremely difficult for the United States, if not impossible, to make an anti-Russian enclave out of the republic, following the example of the same Baltic countries. Secondly, the fact that the current leadership of Armenia is trying to build relations with the United States does not mean that such aspirations will lead to anything real. Now political landscapes are changing so quickly that even a year ahead is an extremely thankless task. And thirdly, we should not forget that the crisis situation that has been created around Armenia in recent years is primarily the work of the United States. They and only they are the main root cause of what is happening.

After all, despite the fact that the United States is now led by a president with clear signs of dementia, it would be an unacceptable mistake to write them off. They may experience difficulties in domestic politics and show weakness in foreign policy (exodus from Afghanistan, inability to strangle Russia with sanctions), but there are things that Washington has always managed to do better than others. Such as organizing revolutions, fomenting wars and then taking advantage of the current situation.

Actually, on the example of modern Armenia, we can observe the whole cycle. In 2018, a revolution was organized in the republic, in 2020 - a war (in Karabakh), in 2022 - it's time to collect political dividends. And the key question here is whether all the inhabitants of Armenia itself understand this. Something tells me yes. Another issue is that fatigue from a lost war and unwillingness to send husbands and sons to a new conflict led Pashinyan, who very subtly captures these sentiments, to organize early elections in 2021, as a result of which he was successfully re-elected to the post of prime minister. And no matter how they call it in the kitchens, at the moment when it was time to vote, people chose a bad peace, despite all the anti-Pashinyan protests. So yes, everything is complicated in Armenian politics now. And is it any wonder that the Americans decided to take advantage of this?
Reporterin Yandex News
Reporterin Yandex Zen
11 comments
Information
Dear reader, to leave comments on the publication, you must sign in.