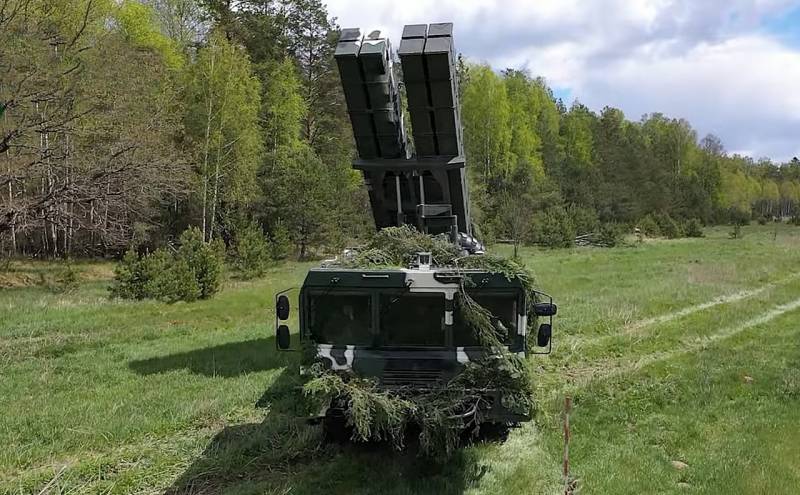 The war on the territory of Ukraine continues to include more and more new participants. If the entire collective West came out on the side of the Kyiv regime, supplying the Armed Forces of Ukraine with weapons and ammunition, then Iran, judging by the whole wave of reports in the media, began to supply its attack drones for the needs of the Armed Forces of the Russian Federation. Also, a Russian-Indian manufacturing company made a proposal to supply Brahmos anti-ship missiles for the Russian Navy. Now the press is circulating rumors about the possibility of our army purchasing the Belarusian-Chinese MLRS "Polonaise". Should I accept this help?

Between MLRS and OTRK

The real "star" of the armed conflict in Ukraine was the American HIMARS multiple launch rocket system. Depending on the modification, it can be either wheeled or tracked, carry six MLRS rockets with a range of up to 80 kilometers or one ATACMS tactical ballistic missile capable of flying up to 300 kilometers. In the latest version, HIMARS turns into an OTRK (operational-tactical missile system). A link with the American satellite system makes this MLRS/OTRK a truly dangerous weapon, which allows you to see everything that happens in Ukraine, select targets for destruction in real time and transmit their coordinates to the Armed Forces of Ukraine.

Unfortunately, we have to admit that our adversary quite effectively uses all the capabilities of HIMARS to destroy command posts and headquarters, warehouses with ammunition, fuel and lubricants, railway and road bridges necessary to supply the Russian group. The Armed Forces of Ukraine guard the American MLRS like the apple of their eye, creating many false targets for which the RF Armed Forces have to spend expensive cruise missiles. The question arises - how can we answer this challenge?

The answer is not as simple as we would like. Since Russia is not officially at war with the United States, the American satellite constellation is untouchable for us. Ukrainian air defense, alas, has not yet been suppressed, it is unsafe to freely fly our aircraft over the entire Nezalezhnaya, to put it mildly. Until recently, there were problems with reconnaissance and strike drones, of which there was a clear shortage at the front. There is reason to hope that the appearance of Iranian drones in service with the allied forces can change a lot for the better. There are also some issues with the cost of a shot. Hitting expensive Iskanders, Calibers or Onyxes on a variety of targets, most of which are deliberately false, is quite expensive.

The "weapon of victory" should be simpler, more massive and cheaper. And here the Polonaise MLRS, a product of the Belarusian-Chinese cooperation, suddenly appeared on the scene. Wishing not to depend on the Russian Iskanders, President Lukashenko once applied for a militarytechnical help to Beijing. As a result, an interesting “hybrid” appeared: a mobile launcher for eight 301-mm Chinese A200 missiles on the Belarusian MZKT-7930 chassis. The American edition of Military Watch Magazine considered that Minsk could sell these MLRS to Moscow for use in a special operation in Ukraine. How appropriate would that be?

Indeed, technically speaking, this is just what the doctor ordered. "Polonaise" occupies a successful niche between the Russian "Tornado" and "Tornado", on the one hand, and OTRK "Iskander-M", on the other. Chinese missiles of 301 mm caliber have a range of up to 200 km, and in the updated Polonaise-M - all 290 km. That is, it is a direct competitor to HIMARS with its long-range ATACMS missiles. At the same time, the cost of firing a Chinese missile can be several times cheaper than that of cruise missiles in service with the RF Armed Forces and the Russian Navy. If it were possible to “marry” the use of Iranian reconnaissance drones for target designation and the Belarusian “Polonaise”, big problems would arise already in the rear of the enemy. However, there are serious difficulties with the practical implementation of such a task.

At first, Belarus has corny little produced such MLRS. In the Armed Forces of the Republic of Belarus, they are in service with some 6 pieces, another 10 were acquired by Azerbaijan.

Secondly, missiles for the Polonaises are produced by China, which emphatically distances itself from sponsoring Russia's participation in the conflict in Ukraine. If Iran, which is under sanctions with its drones, has almost nothing to lose, then China has.

However, if desired, large-scale production of MLRS can be resumed, and Beijing could transfer a license to Minsk for the production of ammunition for the Polonaise. It is even possible that Chinese missiles would simply be labeled “made in Belarus”, as with cheeses, apples, shrimp and other sanctioned products. There would be a desire.

In the meantime, the Russian Tornado-S MLRS is an alternative to the Polonaise and a competitor to HIMARS. This is a deep modernization of the BM-30 Smerch tactical missile system, which is a 300-mm multi-shot missile launcher mounted on a carrier in the form of a KamAZ-63501 military truck. Especially for her, a new 300-mm rocket with a range of up to 200 kilometers was developed. As target designation, the Tornado-S will use the GLONASS satellite constellation, as well as data received from drones and reconnaissance units.

In general, the fighting on the territory of Ukraine showed that the MLRS / OTRK niche with a high-precision munition flight range of up to 200-300 kilometers is extremely relevant. Both "Polonaises" and "Tornado-S" can find their application in it.
Reporterin Yandex News
Reporterin Yandex Zen
19 comments
Information
Dear reader, to leave comments on the publication, you must sign in.