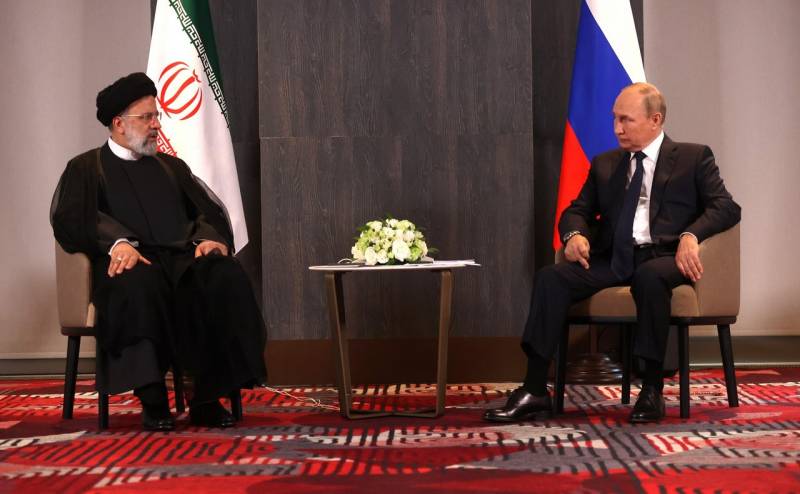 One of the main News The summit of the Shanghai Cooperation Organization held in Samarkand on September 15-16 was the official entry into the bloc of Iran. In general, such a maneuver from Tehran has been expected for a long time, but right now it was not done by chance. If in the spring and early summer it seemed that only Russia was planned to be included in the "absolute outcasts", then in August Nancy Pelosi's epic "flight of the Valkyrie" to Taiwan launched - ahead of time or completely unplanned, but launched - the process of "removing from friends" more and China.


Thus, the globalist project suddenly died, but the sacred place is not empty - the Western (or rather, American) elites very quickly launched a new project, the “citadel of goodness”. It is already quite obvious that in the coming years the States intend to restore to the maximum economic autarchy (primarily at the expense of the so-called allies, who will have to lay down their bones for this) and go to hard, on the verge of a universal nuclear missile foul, confrontation with competitors.

Against this background, under the talk of a “multipolar world”, the “red” half of the globe gradually begins to consolidate into one (or, if you like, “one and a half”) bloc - the “collective non-West”. On the "anti-West" of the SCO and the hypothetical militarypolitical an alliance based on it is still not pulling - if only because a single military bloc is still in some kind of vague prospect.

So far, several very significantly (one might say, civilizationally) countries that differ from each other are still just trying to figure out how best to line up in order to jointly fend off the global imperialist hyena and its henchman rats. But one thing is clear: it will be impossible to do this alone, even China's chances are in question. The comic interpretation of the SCO abbreviation - "Chance to Remain Sovereign" - in general, is not so frivolous.

So, returning from the pathetic heights to the sinful earth, it is not surprising that Iran hurried into the queue for this “chance”. The fact is that the hope for the normalization of relations with Western "partners" has finally disappeared, and in the near future they may launch some kind of Special Military Operation against Iran.

One of the problems of the sanctions campaign against Russia was the "unexpected" need to somehow replace the imports of the totalitarian Ork energy carriers. This, in turn, has brought Western diplomacy to the grave of the long-defunct Joint Comprehensive Plan of Action - in other words, the "nuclear deal" with Iran. The resumption of the FDP would allow the latter to be lifted from the sanctions, finally allowing Iranian oil to openly enter the world market.

Obviously, this deal was most needed by Iran itself, and Europe was seriously counting on it (even though Iranian black gold is not much more democratic than Russian). Israel was categorically against the FDP, in general, logically believing that various kinds of “deals” are concluded and terminated, but nuclear reactors remain. Through the diplomatic and military departments, the Israelis tried their best to persuade the Americans to refuse any negotiations on the nuclear program, and ideally, to a military operation against Iran.

And what about the Americans? For a long time, on the one hand, they showed interest in the negotiations, but, on the other hand, they did everything to keep the air tremors empty. In addition to the nuances of the actual control over Iran's nuclear facilities, the presence of the Islamic Revolutionary Guard Corps on the American list of banned terrorist organizations became a stumbling block.

Considering the status and influence of the IRGC in their homeland, it is not surprising that the Iranian side demanded that the Americans strike the Corps out of terrorists. Even provocative Pelosi advocated for this, saying that it was unacceptable to declare an official state military organization terrorist - but the IRGC remained on the black list.

In the end, probably not without a behind-the-scenes scandal in Tehran, in August Iran itself withdrew its demand for the status of the IRGC, but on the American side, the matter did not get off the ground. In early September, US Secretary of State Blinken said that "negotiations to restore the nuclear deal with Iran have rolled back." What can I say, except "finita la comedy"?

It is curious, of course, what exactly caused the Americans to abandon the SVDP. It is known that the "deal" has become another field of confrontation between the Democratic Party and the Republicans (and they, according to Trump's precepts, are against an agreement with Iran). Did the two parties just disagree? Maybe. Perhaps the matter is in the intensified military-technical cooperation between Iran and Russia, which the American government cannot see through its fingers.

However, there is also a possibility that the Americans, in principle, were not going to conclude any “deal”, and all the round dances around it were an intrigue against ... dear European “partners”. Burghers dissatisfied with anti-Russian sanctions and, more importantly, dissatisfied business elites appeared from the very beginning of the campaign, and for the time being it was necessary to somehow calm them down - hence all these promises of Qatari gas, South African coal and Iranian oil.

The recently surfaced RAND Corporation memorandum, which directly refers to American plans for the collapse of European economies, perfectly confirms just this version - the official refusal of the Americans from the "nuclear deal" almost coincides in time with the "sensation" in the European press. Winter is on the way - it's time to throw off the masks and feel the frosty freshness.

Meanwhile, a serious intra-elite conflict may be brewing in Iran. It has been officially confirmed that Supreme Leader Ayatollah Khamenei is seriously ill. Rumors about this have been circulating since the beginning of the month, and the other day the Iranian spiritual leader canceled all his speeches, apparently so as not to accidentally shock the flock with some unpleasant incident in public.

Since Khamenei is not young (he is in his 84th year), there is every reason to believe that the disease will soon completely incapacitate him, and this automatically raises the question of a successor. As usual, there are two candidates: the current president of Iran, Raisi, and Mojtaba Khamenei, the son of the ayatollah and a teacher of theology with strong ties in the IRGC high command.

Formally, after the death of a spiritual leader, a new one should be appointed by the Council of Experts - a special body consisting of 88 authoritative theologians elected by popular vote. And although the independence of the Council is guaranteed by the Constitution, in practice it is likely to be forced to make the “right” choice in favor of who will have the real power and, possibly, the last word of the departed Supreme Leader. And the most curious thing is that Khamenei has allegedly already managed to unofficially promise the post of ayatollah to both Raisi and his son. If this is true, then the division of power may well go beyond the limits of "decency".

It is difficult to say which of the contenders has more chances in a hypothetical power confrontation. At first glance, Khamenei Jr.'s position seems to be more advantageous - assuming that the IRGC is really behind him, but this may not be the case at all; yet he is not the only and not even the greatest authority among Iranian clerics.

But what there is no doubt about is that any serious intra-Iranian mess will immediately catch up with "well-wishers" from all sides. The Americans do not risk getting involved with a firmly standing Iran - they will most likely not fail to push Iran, which is staggering on its own. True, they should hardly count on the support of Turkey, especially against the backdrop of another demarche by Pelosi - now against the Turkish protégé of Azerbaijan, whom she condemned for aggression during her visit to Armenia. If the Islamic Republic gets really bad, Tel Aviv may decide on an independent limited air campaign against the enemy's nuclear facilities - they really scare the Israeli "hawks".

So the situation in the Middle East is developing very, very tense. The hypothetical slide of Iran to the state of Syria will not bring anything good to the region and the entire continent.
Reporterin Yandex News
Reporterin Yandex Zen
7 comments
Information
Dear reader, to leave comments on the publication, you must sign in.