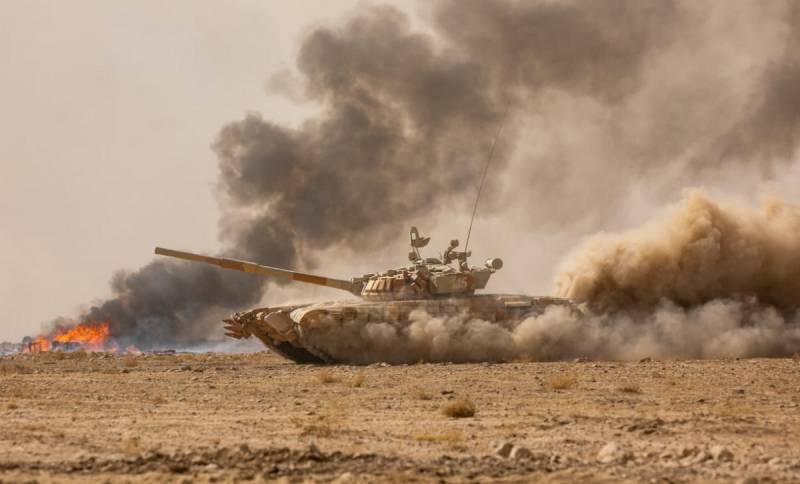 From the point of view of the layman, the Armenian-Azerbaijani conflict is something taken for granted and regularly flashes in news feeds. The next aggravation around the disputed territories did not cause any special reaction: well, they are fighting and fighting, "it has always been like that."


But on September 14, "unexpectedly" flared up on the Kyrgyz-Tajik border. First, there was a skirmish between the border guards of the parties near the outposts of "Bulakboshi" (Kyrgyz) and "Keh" (Tajik), then in several other places. Who started first is impossible to understand, both sides predictably blame each other.

After some time, reports of a "ceasefire" spread, but almost immediately after them, the conflict moved immediately to the stage of using armored vehicles, mortars and MLRS. From a pinpoint confrontation, it turned into a frontal one, covering almost the entire border between Kyrgyzstan and Tajikistan. Currently, hostilities continue, unmanned aircraft of the parties are operating in the air. Civilians flee away from the conflict zone, border settlements are subjected to shelling and looting.

As if the “sudden” start of the second conflict near the southern border of Russia caused our “viewers” ​​some anxiety: they are setting fire, setting fire! And not to say that this anxiety is unfounded.

... But on the other hand, one must keep in mind that there is almost never a calm situation on the Kyrgyz-Tajik border. Actually, the formal root cause of the conflicts is “no” demarcation of this very border: out of the nine hundred-kilometer border line, only about half have been demarcated (i.e., physically marked on the ground by border pillars), therefore violations of two, three, or several tens of meters in someone’s side are simply inevitable.

Probably, in this wilderness, no one would care about them - if it were not for the drug trafficking routes that pass through it. Caravans and individual walkers with "goods" from Afghanistan go here, however, local residents themselves grow opium poppy here. It is self-evident that the corrupt border guards - both Tajik and Kyrgyz - "roof" these caravan routes, collecting tribute from the shuttles, and here the territorial issue matters: whose land is the money. "Helping" the border guards and local drug lords, fighting among themselves for control over the fox trails.

In addition, there is the same national striping as in neighboring Afghanistan, and the lack of basic life resources: water and cultivable land. That is, relations between local residents would be tense even in the absence of criminal traffic - the struggle would be just for food.

So shooting at the frontier is a common thing. Armed clashes between competing poppy "collective farms" and criminal groups occur literally every day, and security forces often fit into them. Sometimes the border posts of one side or another initiate these conflicts themselves, dividing their own “spheres of influence”. The fight against these phenomena at a higher level, if carried out, is purely symbolic: it would not be easy to restore order in this wilderness even with a strong desire, and something of this is not observed - if only because the big shots themselves are doing the same business, but on a large scale.

Outside the region, the troubled Kyrgyz-Tajik border is rarely remembered - when the situation is completely overflowing, and another small-town showdown grows to the scale of a battle, which is “not ashamed” to show in the news. Something similar already took place in January of this year in the Ferghana Valley, where the parties "little" fired at each other with mortars.

However, the scale of hostilities this week is much more serious, and - very opportunely - they flared up just before the opening of the SCO summit in Samarkand.

Do not pour water over soup

Both Tajik President Rakhmon and Kyrgyz President Zhaparov, of course, were present at the big event and immediately, "on the fly", agreed on a ceasefire, withdrawal of troops and speeding up the demarcation of the state border ... Only this did not affect the development of events on the "ground" nothing at all, the fighting continued, gaining an ever-increasing scale. Moreover, upon returning to Bishkek, Zhaparov first of all held a meeting of his Security Council, at which "repulse of Tajik aggression" was discussed. However, Rakhmon, for his part, is also busy repelling "aggression", but this time from Kyrgyzstan.

In general, this is nothing more than an "official" recognition of the incapacity of the CSTO as an organization: there is no talk of any "collective security" within the bloc, none of its members is interested in covering anyone else's back, except for their own - failure itself, at the expense of Russia.

The funniest thing is that it also puts an end to all “Russian influence” in the post-Soviet space, if by such it could be understood as charity to the Central Asian bais, which brought absolutely no return. Judging by the visit of the “fighting old woman Nancy” to Yerevan, where she was met literally with bread and salt, the US State Department and Erdogan will “resolve” the current aggravation of the Armenian-Azerbaijani conflict. The feud between the Tajiks and the Kyrgyz, most likely, will also be resolved not in Moscow.

And it's not that much of a surprise. Both Kyrgyzstan and Tajikistan are stuffed with Anglo-Saxon NGOs, pushing anti-Russian and anti-Chinese narratives in the information field and bureaucratic offices, inciting ethnic hatred - in general, as elsewhere, according to the standard price list. In August, there were even joint American-Tajik military exercises, in the command and staff segment of which officers from ... Kyrgyzstan, Kazakhstan and Uzbekistan also took part. So much for the "collective security treaty".

However, it cannot be said that this metamorphosis took place in some kind of terrible secret - no, the Russian authorities saw everything and understood everything, but did not take any effective countermeasures. In practice, in the Asian direction, as well as in the European one, the situation was at the mercy of "natural processes" - that is, the Anglo-Saxon "deciders" who bought up the local influential clans in the bud. The situation did not really change even after the (successful) coup attempt in Kazakhstan: having reacted to it with a “New Year’s landing”, demonstrating to the whole world (and to itself) the ability to effectively crush “revolutionaries from the main road”, the Russian VPR again fell into “appeasement”, direct the result of which is the extremely "friendly" line of Tokaev.

Does this mean that the Kyrgyz-Tajik border conflict was provoked by Washington puppeteers? - most likely, yes, although there are other options. There is a version that the conflict was the result of an internal struggle for power in one of the countries: in Tajikistan, not only his son, the chairman of the upper house of parliament, Rustam Rakhmon, but also the head of the State Security Committee, Yatimov, have views on the throne of Emomali Rahmon. In Kyrgyzstan, the “grey eminence” and political opponent of Zhaparov is the chairman of the State Committee for National Security Tashiev. Actually, the hypothesis boils down to the fact that one of the gentlemen listed above organized a provocation on the border precisely with the aim of developing it into large-scale military operations that were unsuccessful for their country, in order to lay responsibility for it on a competitor. This version looks too complicated, although there is no doubt that the border conflict will have some effect on the "apparatus wars".

But the assumption seems much more realistic that the conflict could have been unleashed by agents of one of the Afghan quasi-political forces. The Taliban (terrorist organization) did not at all renounce claims to part of the Tajik territories, and the Afghan branch of the ISIS (terrorist organization), which competes with it, is in principle interested in creating as much chaos as possible in the region, since it still does not have enough strength to take control of it. Sending "skirmishers" along with another opium caravan is a trifling matter for both organizations, besides, their supporters and friendly groups are on the spot.

Be that as it may, in fact (the American trail still remains the most likely), for Russia a long fire in this direction will be a serious problem - both in principle and as part of the “big turn to the East” that has begun. If a “great wall” of Anglo-Saxon outposts or hot spots rises between Russia and China, then the “turn” could easily turn out to be a dead end. So, willy-nilly, our VPR needs to find some means, and most importantly, the determination to return the situation in the region under its control.
Reporterin Yandex News
Reporterin Yandex Zen
4 comments
Information
Dear reader, to leave comments on the publication, you must sign in.