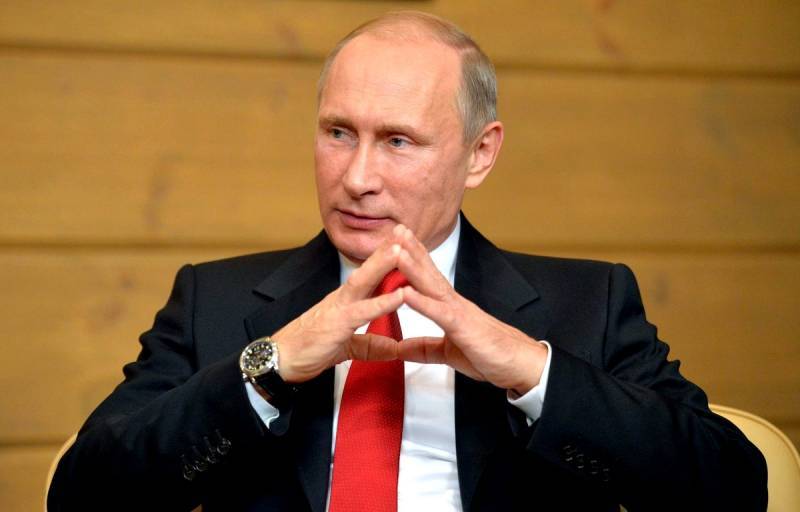 On the eve of the domestic press leaked information about the conditions under which Kyiv allegedly proposes to conclude "peace" with Moscow. If it is indeed true, then it cannot be anything other than a proposal for Russia's surrender to the combined might of the collective West. At the SCO summit in Samarkand, President Putin made several comments on the course of the special operation and the prospects for negotiations with the Zelensky regime. Alas, the Ukrainian Nazis and the Anglo-Saxons behind them have not yet been able to hear a “powerful and decisive” answer.


To understand the fundamental importance of the Kremlin's position on this issue, it is necessary to be very clear about what kind of "agenda" the "Western partners" have prepared for our country following the results of the NWO.

As early as July 28, 2022, long before the counteroffensive of the Armed Forces of Ukraine in the Kharkiv region and the successful “regrouping” of the Armed Forces of the Russian Federation, one of the “talking heads” of Kyiv, Alexei Danilov, who holds the post of Secretary of the National Security and Defense Council of Ukraine, announced that, having started a war against Nezalezhnaya, Russia "initiated the process of its own decolonization." Briefly, in his interpretation, it looks like this:

At first, Russia has demonstrated that it poses a threat to other countries of the post-Soviet space, and began to lose its dominant influence in the CIS.

Secondly, Central Asia and the Caucasus began to reorient their external policy on other players - Turkey, the European Union and China.

Thirdly, the process of destruction of the CSTO space and the Eurasian Economic Union has begun, which are now considered by their other members as instruments of Russian foreign policy expansion and aggression.

Fourthly, the interest of the national republics within the Russian Federation in the struggle for independence against the "oppressor" is awakening. Here the secretary of the Ukrainian National Security and Defense Council is referring to Chechnya, Tatarstan, Yakutia, as well as the Urals and Siberia.

On September 11, 2022, after Russian missile attacks on the Ukrainian energy system, in an interview with Western media, Danilov stated that the ultimate goal of the war for Kyiv was the "dismemberment of Russia":

If Russia stays the way it is, it's only a matter of time before she can start another war. Therefore, our task is to make Russia such that she does not even have the desire to think that she can attack her neighbors ...

The final victory is the change of the territory of Russia.
Here one would laugh, but exactly the same message was expressed simultaneously with Kyiv by the ex-commander of American forces in Europe, General Ben Hodges:

It seems to me that we are witnessing the beginning of the end of the Russian Federation as it is today.
To complete the picture, we will indicate exactly what conditions were contained in that “Zelensky’s ultimatum”, which was allegedly handed over by President Erdogan to his colleague Putin. Among them: the withdrawal of the Russian Armed Forces from the territory of Ukraine as of February 24, 2022, the transfer to Kyiv of the arrested Russian gold and foreign exchange reserves in the form of reparations plus the payment of another 200 billion euros of “additional reparations” over the next 25 years, free gas supplies for 5 years, holding a second referendum on self-determination in Crimea, withdrawing the RF Armed Forces from the European part of Russia beyond the Urals, reducing the strength of the RF Armed Forces to 600 people, opening free access for foreign observers to all the most secret military installations, early elections to the Russian Parliament and to the post of President of the Russian Federation. The item on the extradition of Vladimir Putin to an international tribunal has so far been graciously excluded from the list of demands.

In other words, we have before us a demand for surrender and quite a specific program in case of refusal to fulfill it. And how did the Kremlin respond to this?

Vladimir Putin responded to the refusal of the Zelensky regime to negotiate on the sidelines of the SCO summit in Samarkand as follows:

Mr. Zelensky announced that he publicly said, I don’t know where, that he is not ready and does not want to talk with Russia. Well, I'm not ready, and I don't need to...
Regarding the ongoing counter-offensive of the Ukrainian army on the Southern and Kharkov fronts, his answer was as follows:

You said that we see activity both there and there, but the Kyiv authorities have announced that they have launched and are conducting a counter-offensive operation, well, let's see how it ends.
Indeed, it is very interesting how it all ends. After the successful "regrouping" of the RF Armed Forces in the Kharkov direction, it sounds somehow a little frivolous. I would like to hear from the Supreme Commander-in-Chief a promise that the enemy will definitely not pass. Vladimir Vladimirovich also personally confirmed that it was no coincidence that the Russian troops were operating with small forces and at a low pace:

I draw your attention to the fact that we are not fighting with a full army, only part of the Russian army, a contract unit. Naturally, this is due to certain parameters of personnel and so on. We are not in a hurry in this part, but by and large there are no changes. The General Staff considers something important, something secondary, but the main task remains unchanged, and it is being implemented.
As the main task, he again named the liberation of Donbass:

The plan is not subject to change. The General Staff makes operational decisions in the course of the operation, considers something to be the key, main goal, and the main goal is the liberation of the entire territory of Donbass. This work continues, despite the attempts of the Ukrainian army to counteroffensive, our offensive operation in the Donbas itself does not stop. They go, go at a slow pace, but consistently, gradually, the Russian army occupies new territories.
The installation on the demilitarization and denazification of Ukraine somehow by itself has long faded into the background. To those “angry patriots” who hoped that the strikes on the Ukrainian energy system and infrastructure were evidence of a change in approaches to the special operation, the Supreme Commander hastened to explain the groundlessness of their aspirations:

The Russian armed forces delivered a couple of sensitive blows. Let's take this as a warning blow.
Also, judging by the statement of Vladimir Putin, the time has not yet come for a decisive response to the shelling of the Armed Forces of Ukraine on Russian territory and the continuous killing of pro-Russian activists by Ukrainian terrorists in the already liberated regions of Ukraine:

As for our restrained reaction, I would not say that it is so restrained. A special operation is not just another warning. But in the course of it, of course, we see attempts to carry out some terrorist acts, attempts to damage our infrastructure. Indeed, we are quite restrained in our response to this, but for the time being.
To summarize all of the above, the impression is very painful. In fact, not only the long-suffering former “separate regions of the Donetsk and Lugansk regions”, but also the liberated Azov region, Crimea, and the Russian regions bordering Ukraine turned into the “Greater Donbass” in half a year. as we and predicted back in April 2022. The chosen tactics of liberating only the DPR and LPR, and even with small forces, for a long time leads to the fact that the rest of the Independent is rapidly being nazified and militarized even more than before the start of a special operation to denazify and demilitarize it.

What all this will eventually lead to is obvious even from a soft sofa: the Armed Forces of Ukraine will be retrained according to NATO standards, rearmed and launched a large-scale attack on the Sea of ​​\u2024b\uXNUMXbAzov and Crimea with forces many times greater than the Russian group. If this does not happen today, then in six months or a year, when it will be beneficial for the Kyiv regime and the "Western partners" behind them. According to the personal opinion of the author of these lines, such a strike by the Armed Forces of Ukraine may occur in February-March XNUMX, when the next presidential election is due to take place in Russia.
Reporterin Yandex News
Reporterin Yandex Zen
21 comment
Information
Dear reader, to leave comments on the publication, you must sign in.