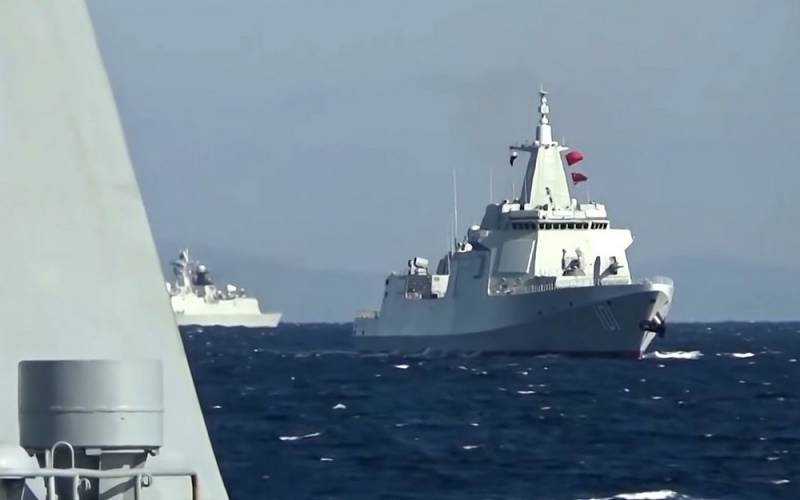 An important topic of all major military publications in the United States was the visit to Washington by Japanese Defense Minister Yasukazu Hamada - the first since his recent appointment (in August) to this post. In addition to the traditional mutual assurances with his colleague Lloyd Austin of "commitment to the Japanese-American alliance", the most important of the publicly announced topics of this visit was the joint naval patrol in the Pacific, launched by Russia and China.


In particular, the official website of the US Naval Institute (USNI) even reproduced a message from the Russian Ministry of Defense, which says that this mission “is designed to strengthen naval cooperation between Russia and China, maintain peace and stability in the Asia-Pacific region, monitor sea waters and marine protection economic activities of Russia and China.

The ships of the Russian Navy involved in patrolling include: the large anti-submarine ship Marshal Shaposhnikov (tail number 543); missile corvettes Perfect (333), Loud (335), Hero of the Russian Federation Aldar Tsydenzhapov (339), all of them - project 20380; and military refueling tanker Pechenga.

The Navy contingent of the People's Liberation Army of China (PLA) includes the heavy destroyer Nanchang (101) - the latest Type 055, which in the United States is often referred to as "cruisers"; the frigate "Yancheng" (546) - Type 054A and the supply ship "Dongpinghu" (902). As specified in the USNI, the same ships of the PRC participated in the international exercises under the auspices of Russia "Vostok-2022", which ended on September 7.


However, in the US and Japanese media, they preferred to “forget” about the reminder that this is already the second joint maritime patrol of Chinese and Russian warships in close proximity to the coast of Japan. The first such mission was completed in October last year, and the Russian-Chinese connection then proceeded through the Sangar Strait, which connects the Sea of ​​Japan with the Pacific Ocean between the islands of Honshu and Hokkaido. The People's Republic of China and Russia did not forget to emphasize that this "in no way violated the norms of international maritime law."

As a result, the matter was limited to impotent, albeit loud, indignation on the part of the Japanese side and deeply irritated discontent in the United States, since the Japanese declared these waters "international" precisely under American post-war pressure, so that the US Navy would pass their ships there without any problems, including those with nuclear weapons. weapons on board.
Reporterin Yandex News
Reporterin Yandex Zen
Information
Dear reader, to leave comments on the publication, you must sign in.