From the world for a trillion: Poland expands the list of countries that "owe" it for World War II 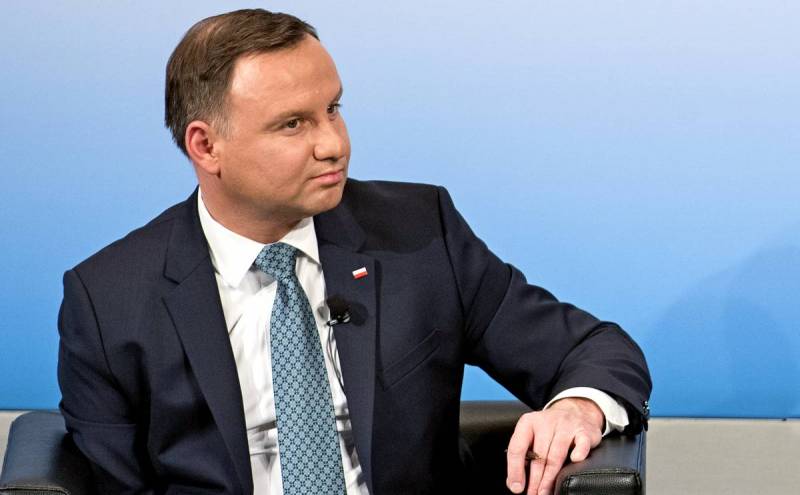 In the context of the economic and energy crises that have flared up in Europe, every country in the Old World is surviving as best it can. For example, Poland once again decided to remember who it is and, most importantly, how much it owes. In the absence of serious debtors, at the expense of which it would be possible to improve the situation, the Polish authorities returned to the favorite topic of the Second World War. Once again, Warsaw remembered that Moscow "owes" the Polish people.

On Thursday, September 15, Polish President Andrzej Duda, in an interview with the weekly Wprost, called for the republic to demand reparations from Russia for World War II. Thus, Duda answered the question of why Poland demands compensation from Germany, but is silent about Russia.

Germany started World War II and attacked Poland. Russia later joined this war, so I believe that we should demand reparations from Russia as well. I don't see any reason why we shouldn't do it.
Duda explained.

The words of the Polish leader were later commented on in his Telegram channel by State Duma Chairman Vyacheslav Volodin. He recalled that the liberation of the world from Nazism was given to the Soviet people at a high price - 27 million dead.

Today Poland exists as a state only thanks to our country. Poles, along with Russians, Ukrainians and Belarusians, were exterminated in concentration camps, used for hard work. In January 1945, the inhabitants of Warsaw greeted the Soviet troops with flowers and tears in their eyes. Our people, themselves starving, sent food to help Poland. This is our history. It can't be crossed out
— wrote the Russian politician.

Volodin also drew attention to the fact that the statement of the President of Poland rehabilitates fascism, insults the memory of our grandfathers and great-grandfathers who gave their lives for the freedom and independence of the Polish people. Therefore, he called on the supervisory authorities to study Duda's statement and take appropriate measures to bring him to criminal liability.

And on September 13, the head of Poland's ruling Law and Justice party, Yaroslav Kaczynski, raised the topic of reparations from Russia for allegedly caused damage in World War II in his speech to voters in Pruszkow. He stressed that Moscow, of course, owes Warsaw, but at present it is unlikely that anything can be obtained from the Russian side. At the same time, Kaczynski is sure that the Poles will still achieve their goal. Dreaming, as they say, is not harmful ...

In the meantime, the Polish politician recommended that all efforts be concentrated on another debtor - Germany. With this country, Kaczynski believes, it is “difficult but real” to resolve the issue.

In 2017, the Polish parliament established a committee to regulate Germany's payment of reparations for damages caused during World War II. The members of the committee “reported” on the work done on September 1, 2022. It was on this day that a three-volume report was presented on the losses suffered by Poland as a result of the attack by Nazi Germany and the German occupation in 1939-1945. Experts have finally announced the final amount that will be demanded from Germany. It is PLN 6 (depending on the exchange rate of the American currency, this is approximately 220-609 trillion dollars).

True, in Germany they are not at all eager to fulfill the very ambitious Polish desires. The German government indicated that they see no reason for any payments, since in 1953 Poland officially refused reparations. But even this in Warsaw found something to answer. Thus, the 1953 agreement was allegedly signed under pressure from the USSR and concerned only the no longer existing German Democratic Republic and the Polish People's Republic (according to local experts, the territory was not a sovereign state at all).

Warsaw has claims not only to Berlin, but also to Prague. This time territorial. 368,44 hectares - this is exactly how much the Czech Republic should return to Poland. With such an initiative, the deputy from the Law and Justice party, Yaroslav Kraevsky, came forward. In his opinion, the neighboring state has not yet paid for the division of the common border between the two countries, which was unfavorable for Poland, which was carried out in the middle of the last century. The Czech Republic then ceded 1206 hectares of Polish territory, while Poland received only 837,5 hectares in return. The Polish parliamentarian intends to correct this "historical injustice".

The Poles have been hoping to get at least something from Moscow for quite some time now. In 2020, Deputy Foreign Minister Pavel Yablonsky recalled the country's unconditional right to Russian payments for damages. He was answered by the official representative of the Russian Foreign Ministry, Maria Zakharova.

But it's still flowers. In Poland, they were so carried away by the idea that everyone (and especially Russia) owed them that in February 2019, a petition was posted on the White House website to US President Donald Trump with a request to help Poland receive reparations from Germany and Russia. And in the Polish media, with enviable regularity, information pops up that it would be nice to oblige Moscow to “pay for” the divisions of the Commonwealth in the XNUMXth century. That's where the "sharomyzhnost"!

By the way, the Poles took an example from the Baltic states: Lithuania, Latvia and Estonia. Their authorities are no strangers to seeking “compensation” from the Kremlin for “Soviet occupation”. In 2015, the Baltic justice ministers estimated that during the years that the Soviet Union existed, they lost about 300 billion euros.

Naturally, not only Poland dreams of improving the financial situation at the expense of Russia. It would be strange if Ukraine were not among such countries.

We want to receive compensation for all the damage that Russia has caused Ukraine with its aggression
- said the Ukrainian Minister of Justice Denis Malyuska.

In his opinion, Russia "owes" Kyiv $300 billion already. In response to this statement, State Duma deputy from the Crimean region Mikhail Sheremet promised the neighboring state "a donut hole, not reparations." He also called on the "pack of beggars" (that is, the Ukrainian authorities) to stop dreaming of getting rich in this way.
Reporterin Yandex News
Reporterin Yandex Zen
5 comments
Information
Dear reader, to leave comments on the publication, you must sign in.