Will China be able to push American, European and Russian aircraft 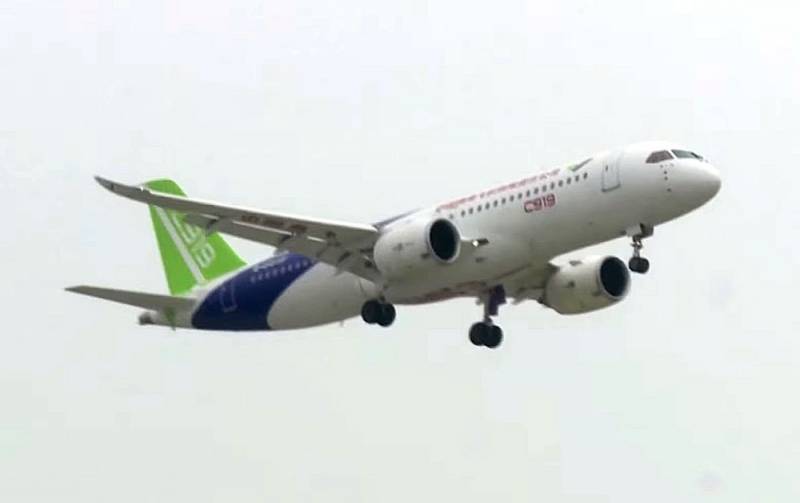 According to media reports, on September 19, the first Chinese narrow-body passenger aircraft C919, which will compete not only with Boeing and Airbus products, but also with the Russian MS-21, should receive a certificate. A little more, and the Celestial Empire will be able to fully regain its skies, starting to push American and European planes out of there.


Indeed, the civil aviation industry in China is developing very actively, and in the very near future Beijing will be able to completely cover all its internal needs. A significant role in the development of the aviation industry of its direct competitor was played not only by the United States and the European Union, but also by Russia.

The ARJ21 Xiangfeng (Soaring Phoenix) is China's first regional jet developed independently by the national Commercial Aircraft Corporation of China Ltd., which is part of the state-owned AVIC I Corporation. However, this statement is not entirely true.

The fact is that at first the Chinese trained on the licensed production of American McDonnell Douglas MD-80 liners. In China, they do not particularly hide the fact that their ARJ21 is structurally very close to the MD-80, and that many components of its McDonnell Douglas MD-90 modification are used in the assembly. This does not prevent Commercial Aircraft Corporation of China Ltd. claim that the "Soaring Phoenix" is their own design.

Production of the short-haul aircraft began in China in 2017. Depending on the layout, from 70 to 115 passengers can fit in its cabin. This makes it a direct competitor to the Russian Superjet-100, the Brazilian Embraer E-Jet E2, the family of Canadian Bombardier CRJ700, CRJ900 and CRJ1000 liners, as well as the European Airbus A220-100 and Airbus A318 in some modifications.

The C919, from which this story began, is a family of narrow-body medium-haul liners designed to carry from 156 to 190 passengers. It is considered the second civilian aircraft independently developed in China.

It was also preceded by the production of an experimental airliner Shanghai Y-10, which had a Boeing 707 as a prototype. Externally, the aircraft are very similar, which is not surprising, the engines were also used by the American Pratt & Whitney JT3D-7. All other components were Chinese, giving reason to assert that this is an independent development. The liner did not go into series, because at that time the needs of the PRC were covered by the American MD-80 produced under license and medium-haul aircraft bought abroad.

Now it's time for the Celestial Empire to challenge the Airbus A320neo and Boeing 737 MAX, as well as the Russian MS-21 with a fully modern C919 airliner. There is already a pre-order for 517 aircraft. Their big competitive advantage is twice lower price: 50 million dollars for a unit against 72-120 million dollars for Airbus A320 or 78-108 million for Boeing 737 depending on modification. The main market for the C919 in the medium term is expected to be Chinese, then - as it goes. Or rather, how to fly.

The Achilles' heel of this promising project can be considered dependence on the supply of engines from abroad. The Chinese liner will be equipped with CFM International LEAP-1C turbojet bypass (turbofan) engines with a thrust of 14 tons. CFM is a joint venture between the American GE Aviation and the French Safran. The critical dependence on "Western partners" clearly worries Beijing very much, so its own power plant is being developed to replace the LEAP-1C.

In this regard, our MS-21 was very lucky that literally from the very beginning of this project, a promising Russian airliner was planned not only with the American, but also with the domestic PD-14 power plant. However, the "Western partners" did everything in their power to delay the emergence of a new competitor as much as possible. Due to the need to import-substitute many other components, the MS-21 will go into production a few years later than the C919, with which it launched at the same time.

The project of a wide-body airliner CR929 with a capacity of 250-300 passengers can probably be called our main disappointment. It was assumed that the aircraft would be developed and produced jointly by Russia and China in equal shares. Our country had to provide everything Technology, based on the Soviet Il-96 experience, and produce composite wings. Everything else, including assembly, remained with the Chinese partners.

However, alarm bells began to sound a few years ago, when information allegedly about the desire of the PRC to share production and sales with Russia got into the press: they are on their own, we are on our own. Then the story was hushed up, but the sewing in the bag cannot be hidden. Last summer, Deputy Prime Minister Yury Borisov publicly complained that Moscow was not satisfied with the course of cooperation with China, since its share is constantly declining:

We are working with China on this project, which, in principle, is not proceeding in the direction that suits us… Our participation is decreasing and decreasing. I do not want to predict the future of this project – whether we will leave it or not, but for now it is in fact going on.
In fact, the joint Russian-Chinese CR929 did not appear at all in the new civil aircraft development program, which allows us to draw the most disappointing conclusions. And who would have thought that this would end, right?

As a result, China received on a silver platter the production technology of a wide-body airliner. Russia, in fact, has remained with its long-haul Il-96, which has a chance to be revived in the Il-96-400M modification.
Reporterin Yandex News
Reporterin Yandex Zen
6 comments
Information
Dear reader, to leave comments on the publication, you must sign in.