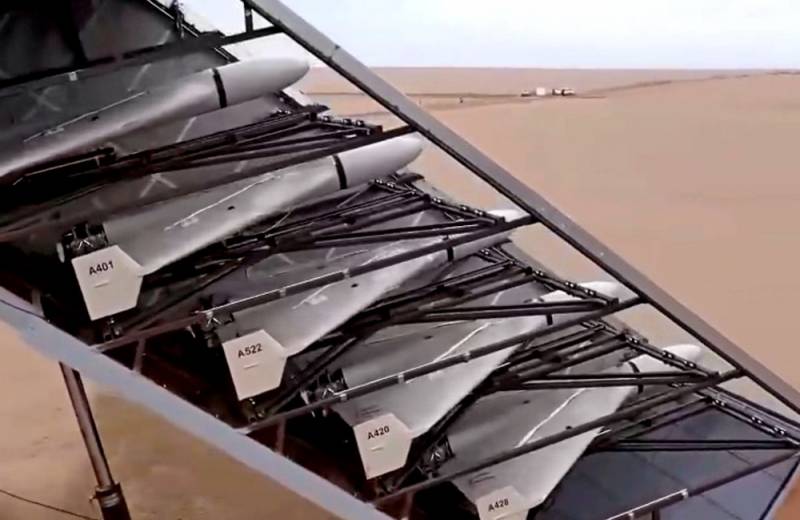 Perhaps the main positive news Against the backdrop of what is happening now in Ukraine, we can consider the reports that have appeared about the possible use of some new drones by the RF Armed Forces, in which military experts immediately identified Iranian drones. Does this mean that Tehran has really begun to supply its drones to our country and that they can really change on the battlefield?


The information that the Armed Forces of Ukraine allegedly shot down a new Russian UAV called "Geran-2" was the first опубликовал Telegram channel ImpNavigator, and it was immediately picked up by all other media. The images show fragments of a loitering ammunition, outwardly surprisingly similar to the Iranian Shahed-136, which the author of the channel noted:

It is possible that kamikaze drones from the Shahed line purchased in Iran, or assembled, or made under an Iranian license, went into battle.
Then the INTERNATIONAL Telegram channel published a video showing the work of a certain reconnaissance drone that corrects fire. This is clearly not happening in Iran, Yemen or Syria. Apparently, missile and artillery strikes with the help of UAV target designation are carried out at the positions of the Armed Forces of Ukraine, hidden somewhere in the forest, which is most likely in the Kharkiv region. As attentive commentators noted, outwardly the drone is very similar to the Iranian Qods Yasir light tactical reconnaissance aircraft, which is an unlicensed copy of the American Boeing Insitu ScanEagle drone.

It is possible that all this is the first evidence of the real use of Iranian UAVs in Ukraine. The fact that Moscow intends to buy a large batch of drones from Tehran has long been said by senior officials in the US administration. It is known about the frequent air flights from the Islamic Republic to our country, which may indirectly confirm the fact of delivery. Moreover, citing their own sources, the American media said that the Russian side was allegedly very unhappy with the poor quality of Iranian products, the Mohajer-6 and Shahed drones. But then what about the Kremlin's assurances that all these are fakes and stuffing from the "Western partners"?

In fact, there is nothing particularly surprising here. The situation developing on the Ukrainian fronts confirms that the allied forces are indeed experiencing a noticeable shortage of modern reconnaissance and strike drones. The fact that Russia, to put it mildly, was late to participate in the unmanned of technologies, the relevant Deputy Prime Minister Yuri Borisov personally admitted:

I think that we have belatedly engaged in the serious introduction of unmanned vehicles. This is objective. Although the Syrian conflict has pushed us to this.
An unhealthy situation is emerging when Ukraine is supplied with all the types of UAVs it needs, and Russia has been relegated by the collective West in its "party" to the status of a "rogue" country, to which no one is going to sell their drones. Except for another country in a similar position. Iran has been under Western sanctions for decades and has been able to produce unlicensed copies of American and Israeli drones of all types. The open secret is that Tehran supplies its drones to the Houthis in the form of kits, which they independently assemble and actively use against a common enemy.

The lack of official comments from the Kremlin on the purchase of Iranian UAVs is easy to understand. Recognizing the fact means once again confirming that for 8 years they have not been very well prepared for the war with Ukraine in the tactical unmanned aviation component. A compromise option is the "screwdriver" assembly of Iranian drones from ready-made kits under the Russian name at the first stage with the gradual localization of production in the future. as we and supposed. Hence the new types of drones that appeared out of nowhere. In addition to the drones themselves, their use also requires the appropriate infrastructure, as well as qualified specialists.

It is quite possible that evidence of tests of Russified Iranian drones in real conditions, quite successful, got into the public domain. But what can these drones really make a difference in a special military operation?

Actually quite a lot. Kamikaze drones, if used not individually, but in hundreds or thousands, are capable of very effectively knocking out enemy armored vehicles and anti-tank systems, flying right into the window, destroying firing points arranged in apartments. "Geranium-2" will be indispensable in urban battles. Reconnaissance drones will significantly increase the effectiveness of Russian artillery operations, quickly carrying out reconnaissance and target designation. Reconnaissance and strike UAVs equipped with anti-tank missiles and guided aerial bombs will be able not only to detect targets, but also to destroy them independently.

If the allied forces in the Kharkiv region had hundreds of such drones in the sky at the same time, the breakthrough of the Armed Forces of Ukraine to Balakliya, Kupyansk and Izyum would become impossible due to the catastrophic losses of the enemy in equipment and personnel. Eh, we would have Iranian drones in the right quantities and a month earlier!
Reporterin Yandex News
Reporterin Yandex Zen
11 comments
Information
Dear reader, to leave comments on the publication, you must sign in.