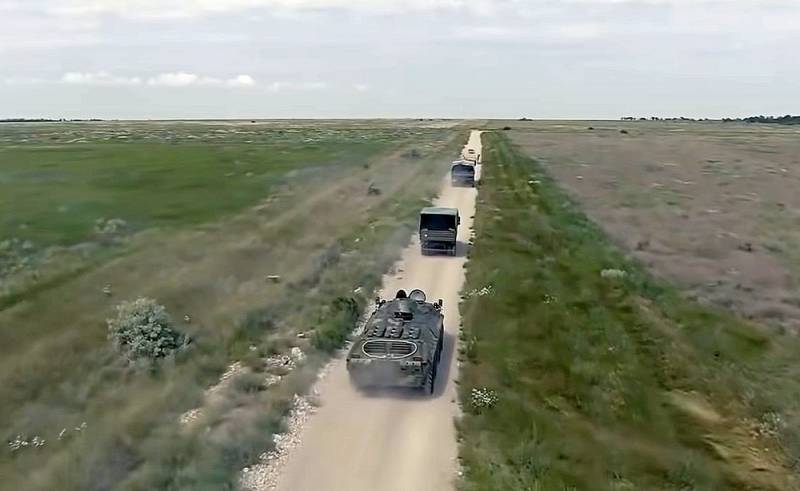 The recent breakthrough of the Armed Forces of Ukraine in the Balakliya region allowed our enemy to regain control over the Kharkov region literally within 4 days. Fearing to be surrounded, the Russian troops were forced to hastily leave their positions and regroup, withdrawing from Kupyansk and Izyum. Having received valuable trophies in the form of armored vehicles abandoned in a hurry, the Ukrainian army, inspired by success, is now preparing to attack in other directions. However, this dizziness could cost the Zelenskiy regime dearly.


So, Mikhail Podolyak, adviser to the head of the office of the President of Ukraine, said about the need for an early “liberation” of the entire Kherson region for a further strike on Crimea:

A scenario for a military operation to liberate Crimea is currently being worked out, but the entire Kherson region is needed to ensure it, so an offensive in this direction is being prepared first.
Kharkiv region, now Kherson region, and then also Crimea - the “bloody clown” is walking very wide. How not to tear the crotch. But seriously, in addition to the obvious euphoria from the unexpected victory in the Kharkov direction, Kyiv has certain grounds to hope for the development of military success in the south as well. What do we have by September 2022, six months after the start of the special operation to demilitarize and denazify Ukraine?

We have the Kyiv regime as an adversary, which has an armed force of 700 men, and the total number of combatants at the moment is estimated at about 1 million people. All the past 8 years, the Ukrainian military has been trained by NATO instructors for exactly the kind of war that is happening now, in urban conditions, which, by the way, is not taught to Russian soldiers, with the exception of special forces. Despite the thousands of rockets and millions of shells fired at them, as well as huge losses, estimated at least two hundred thousand soldiers, the Armed Forces of Ukraine survived and did not break. knocked out old machinery the Soviet-style countries of the NATO bloc are actively replacing them with modern Western-made ones. Intelligence for the Armed Forces of Ukraine is carried out by the American satellite constellation, numerous AWACS aircraft and reconnaissance UAVs, which promptly provide them with the most accurate data for target designation. The dominance of the Russian Aerospace Forces in the air cannot be fully realized due to the presence of a serious air defense system in the enemy, which is now beginning to be replenished with more and more modern air defense systems. Perhaps soon the sky over Ukraine will be completely closed to Russian aviation, and we will lose our last clear advantage. Everyone has already heard about the problems with their own unmanned aircraft among the allied forces. The ships of the Russian Navy cannot approach the Ukrainian coast because of the real danger of getting on board the Neptune or Harpoon anti-ship missiles.

The last operation in the Kharkiv region clearly demonstrated that the Armed Forces of Ukraine, controlled by NATO generals, can attack extremely successfully. Such a threat must be taken very seriously. The Pentagon's plan for a new counteroffensive on the Southern Front might look like this.

All previous attacks of the Armed Forces of Ukraine in the Kherson direction were reliably stopped by the Russian army, and the enemy suffered exceptionally heavy losses. However, now the direction of the blow can be chosen differently by him. Instead of wasting valuable reserves in the Kherson region, the Kyiv regime can launch a powerful counteroffensive in the Vuhledar direction. According to some reports, the defense of the allied forces there so far is little better than in the Kharkov region. Numerous sources report the accumulation of a mechanized shock fist by the Armed Forces of Ukraine there. In the event of a repeat of the recent success, the Ukrainian army can break through to Volnovakha and even Mariupol, reaching the coast of the Sea of ​​Azov. And then, when the worst-case scenario is realized, we may start to have serious problems.

Crimea, which Podolyak openly covets, has two key problems for its normal life: the need for fresh water supplies from the Kherson region, as well as the need for a reliable transport corridor to supply it. Russia has not been able to reliably solve the first problem in all the past 8 years after the reunification. The Crimean bridge has been built, but it is a priority target for Ukrainian missiles to hit. For this reason, the control of the Armed Forces of the Russian Federation over the Sea of ​​\uXNUMXb\uXNUMXbAzov is of strategic importance.

In the event of a breakthrough of the Southern Front, the Donbass will be cut off from the Sea of ​​Azov, which means the elimination of the land corridor to the Crimea. The Crimean bridge will undoubtedly be subjected to massive missile strikes, including long-range American-made missiles. The ferry across the Kerch Strait will also be taken under fire control. The supply of Crimea and the Russian group located there will be stopped. In parallel, the enemy, using the American satellite system for target designation, will be able to pinpoint Russian artillery and armored vehicles in the Kherson and Zaporozhye regions. The Armed Forces of the Russian Federation will eventually have to leave the Right Bank of the Dnieper, and then roll back to Perekop. Having regained control over the Sea of ​​Azov, the Kyiv regime will begin to accumulate a shock fist already for an attack on the Crimea, if not today, but tomorrow, in six months or a year.

Powerful plan. That's just not the fact that it will come true. Vice versa. The General Staff of the RF Armed Forces is well aware of these weaknesses and simply cannot allow the enemy to do something like this.

To stop the recent counter-offensive attempt in the Kherson direction, on the Southern Front, the RF Armed Forces concentrated a powerful grouping of about 40-50 thousand people. According to rumors, the newly formed 3rd Army Corps, equipped with the most modern armored vehicles and heavy artillery, may be located somewhere there. The 20-30 thousandth group of the Armed Forces of Ukraine, assembled in the Ugledar direction, advancing across the bare steppe, will be adequately met and defeated with an extremely high degree of probability. At the same time, the most combat-ready mechanized units of the Ukrainian army will be knocked out, which may become compensation for the territorial losses of the allied forces in the Kharkiv region.

Russia simply cannot afford to lose the Sea of ​​\uXNUMXb\uXNUMXbAzov, so all the necessary reserves will be thrown into battle.
Reporterin Yandex News
Reporterin Yandex Zen
46 comments
Information
Dear reader, to leave comments on the publication, you must sign in.