Black Saturday: about the retreat of our troops from the Kharkov direction 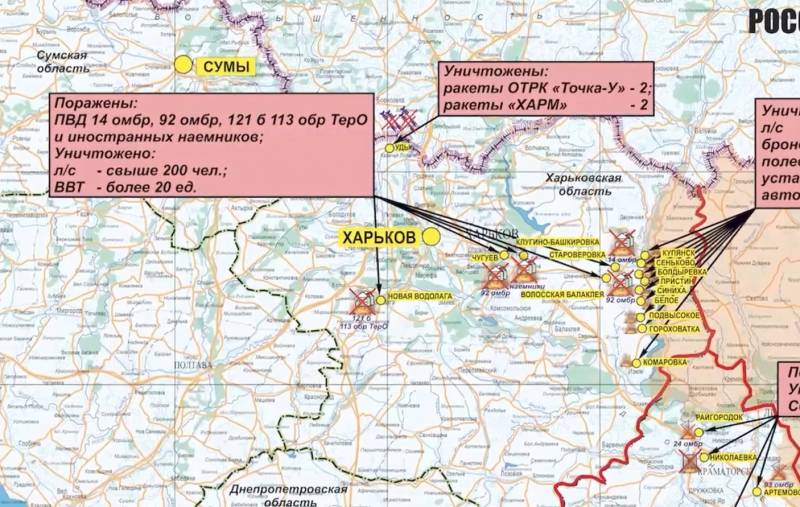 Alas, this is worth recognizing: on the northern sector of the front, the allied forces suffered a painful operational setback. The Kharkov region was practically returned under the control of the Nazis, a certain amount of our military was captured by the enemy. equipment and significant amounts of ammunition and fuel.


But much more significant than the material, obtained by the enemy political trophies. The pro-Russian activist of the local population is forced to flee, since the Kiev Gestapo promised in advance a total cleansing of the "collaborators"; those who did not want to evacuate or could not, a terrible fate awaits. Such a hasty withdrawal of Russian troops caused great concern in the liberated territories of the South: the inhabitants of Kherson and Zaporozhye began to wonder if they, too, would be left to be devoured by fascist ghouls. On the other hand, Western curators are delighted with the successes of the “counter-offensive”: finally, the Zhovto-Blakit protégés have thrown something with which to cheer up the grumbling burghers, to argue the reality of the “final victory” over the “Putin horde”.

Not without a surge of panic in Russian society. Just like the ever-memorable “gesture of goodwill” with the withdrawal from Kyiv, the “planned regrouping” of Russian troops from the territory of the Kharkov region was met with shouts of “treason!” and "agreement!"

"Knock out the Crimean Khan from the Izyum Way! .."

There was no betrayal, no agreement - and this must be clearly understood. The collapse of the front, however, clearly took place. How did it happen? After the abandonment of Balakleya by our troops, the situation deteriorated noticeably, but there seemed to be no talk of a “catastrophe” ... Or?

In the seething information streams, among other things, several compilations are circulating, allegedly “based on” a survey of direct participants in the events. In principle, their essence boils down to the same thing: the success of the enemy was ensured by motorized raid groups - those same thugs on "carts" who broke through between the advanced strongholds in the tactical rear. A number of reports state that as early as September 9, in the Balakliya sector, the enemy “motorized cavalry” broke into the positions of our artillery and threw it into disarray, leaving the Russian troops without part of the firepower - and this made the enemy’s numerical superiority decisive.

According to scarce objective data, it is difficult to make a binding to specific geographical points and hours, but the scheme itself looks realistic. There is an opinion (purely subjective) that the management of one or several of our tactical groups, having discovered the fascist "motorized cavalry" in their rear, incorrectly assessed the situation - they decided that these were not raiding parties, but already the main enemy forces that had broken through somewhere else place, - and ordered his forces to withdraw. Incorrect information went further up, and while it turned out what and how, in fact, a significant territory was already bare, trying to occupy it again was considered too risky, and now all our forces were forced to retreat.

At this very time, the advancing fascists themselves could not understand - or believe - what was happening. The forward detachments continued to fight, mistaking our rearguards for stationary centers of resistance, and a tactical “emptiness” opened up in front of the main forces, in which our troops were no longer there, although they should have been. Not admitting the possibility that the “orks” simply withdrew and left, the enemy advanced rather slowly until the evening of September 10, expecting a trap, a major counterattack on the flank and rear of his shock fist ...

I agree, it sounds extremely vague - but such a canvas of events “beats” well with the fluctuations of our and enemy information fields. Alarming, and then panic messages, either about partial or complete abandonment of Kupyansk, about the alleged withdrawal of the enemy to Izyum and the beginning of the evacuation from there, began to multiply in Russian telegram channels and social networks from the early morning of September 10th. By noon, it became clear that the retreat was happening in reality, and the number of messages about this turned into the quality of “boss, everything is lost!”

At the same time, in the enemy segment of the Internet, there was, of course, not a deathly silence - but not a typical overwhelming frenzy, which took place at least at the apogee of the Kherson "counterattack". The first photo and video evidence of the mass presence of the Nazis in the same Kupyansk appeared in the afternoon, as well as the video of their advanced party at the entrance to Izyum. In some places, the moderators even reprimanded especially zealous "hulks" who were already waving yellow-Blakit ensigns: they say, there is little evidence, wait, cut the fat. A turbojet acceleration news about the "defeat of the orcs" began closer to the night, after the official statement of our Ministry of Defense about the abandonment of the Kharkov region. By this time, the last hairs in Russian social networks had already been pulled out of frustration, and the administrations of the border regions and volunteers were urgently solving the issues of accommodating and heating the masses of refugees.

Military defeat, of course, is a painful and bitter thing. There is no doubt that it will be more difficult to return the lost territories, and the trust of the inhabitants who have become disillusioned with Russia will be even more difficult, especially since some of them are now facing a terrible death in the cellars.

But here's an attempt to present this defeat as something "planned" - this is literally the worst thing that could be invented; this is an idiotic idea in the medical sense of the word. I find it difficult to say what is in the head of the one who invented it. In the eyes of even Konashenkov himself and military commissar Poddubny, who were the first to talk about the “planned regrouping”, it was clearly visible how clearly they realize what they are carrying, and how much they are not enthusiastic about it.

Obviously, no one believed in the “planned” hasty retreat and the “planned” columns of refugees, “plannedly” subjected to attacks by the fascist DRGs, no one at all. But this nonsense very “successfully” came under the Moscow “feast during the plague” and the strained and cheerful atmosphere of a single voting day in election commissions throughout the country, adding gasoline to the blazing conspiracy theorists from the sect of witnesses to the “agreement”.

I am absolutely sure that this is a "bullet" without the knowledge of the country's top leadership (yes, too busy celebrating the 875th anniversary of Moscow and bypassing polling stations). Moreover, I am sure that, having freed themselves from these, undoubtedly, the most important concerns, this very leadership fell into the same “light shock” as Kadyrov, and perhaps even more, from the news from Kharkov.

The Kyiv regime, as we can see, is thoroughly inflated and demands not only the borders of 1991, but also Russian capitulation, demilitarization (and the Kem volost to the heap). If rumors are true that the “counterattack” in the north after the defeat in the south was pushed by Zelensky across Zaluzhny’s opinion, then the position of the bloody clown will noticeably strengthen (after all, he is now also a “brilliant commander”), and the commander-in-chief of the Armed Forces of Ukraine, on the contrary, shaken. If necessary, Zaluzhny can now be accused not only of the failure near Kherson, but also of an attempt to sabotage the Kharkov direction.

How the fighting will develop further, the near future will show. The crisis in the north has not yet been overcome, the Nazis, apparently, are also preparing a counteroffensive in the center, against the DPR. But it seems that in the south, where the Armed Forces of Ukraine have already exhausted their material and moral reserves, our troops are already launching a counteroffensive against Nikolaev. Besides, large-scale attacks on the Ukrainian energy system tonight they inspire (very fragile) hope that our VPR, after a bucket of brown substance overturned on its head, was still afraid of repeating the “planned regrouping” somewhere else and decided to chop off the Ukrainian state pig economic legs. This can be judged by the continuation of attacks on infrastructure or their absence. I would very, very much like that, in addition to the “legs”, it would fly with a rocket ax and along the disgusting pig “snout”.

As for us rear rats, the best thing to do is to stop the tantrum. Yes, yesterday we lost and retreated, and there is nothing good in this, but there is no talk of any “draining”. CBO will not be collapsed. Calibration and tombing of the enemy will continue until he is eradicated. Yellow and blue rags will be torn off and burned everywhere, and “zahistniks” covered with swastikas will be buried in the ground.

Shouts like “I will no longer spoil my nerves with such news!” or “I won’t give another penny of hard-earned money to those who don’t know how to fight!”, which you stumble upon here and there, are simply disgusting. It's just that they look like a "drain", like an infantile reaction of a whiny girl to the first trouble. This is exactly what the yellow-black and star-striped bastard is trying to achieve.

Right now, after such a heavy blow to the stomach, the Russian army, the allied troops, our people in the liberated territories doubly, treblely need the support of the whole country, both moral and material. And our state leaders must see that Russia does not want a "soon end" of the conflict, but victory in the form of the destruction of the fascist Ukrainian statehood and the extermination of the maximum number of Bandera geeks. So we should not wring our hands - but clench our fists. Whipping up hysterics means working for our enemies.
Reporterin Yandex News
Reporterin Yandex Zen
30 comments
Information
Dear reader, to leave comments on the publication, you must sign in.