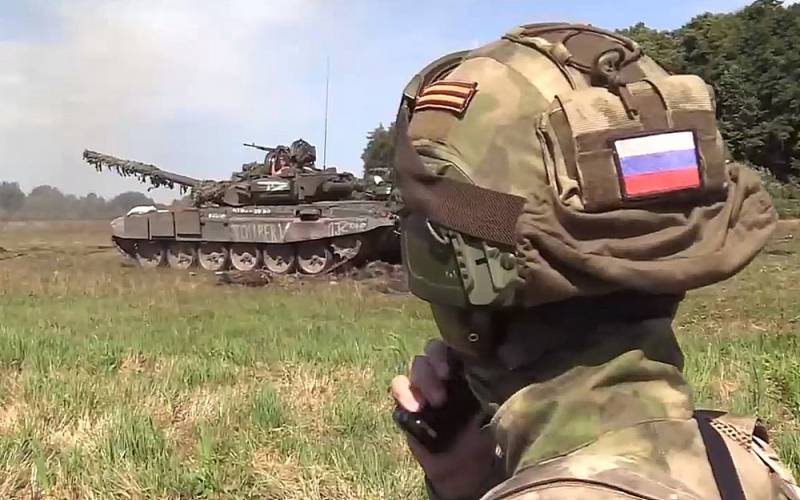 What happened in the last few days in the Kharkiv region requires its reflection in order, as they say, to exhale and move on. Let us sum up some results of the large-scale counter-offensive of the Armed Forces of Ukraine on the Eastern Front.

To begin with, I would like to put together all the relatively “optimistic” versions that try to explain the rapid regrouping and retreat of Russian troops from almost all of their former hard-won positions in the Kharkiv region.

The well-known military expert Konstantin Sivkov tried to generate something positive, who considered the hasty maneuvers of the allied forces to lure the enemy into a “fire bag”:

Well, God forbid. True, it is still not clear what forces the RF Armed Forces should then launch a counteroffensive and break into half-empty Kharkov.

Another version, expressed in the comments on various Internet resources, belongs rather to the category of Putin's famous "multi-moves". Say, we left on purpose to hang on Kyiv the maintenance of vast and war-torn territories on the eve of winter. To what extent this approach is adequate, judge for yourself.

Woe to the vanquished

Be that as it may, a very high price will have to be paid for the "regrouping".

At first, Russian troops lost a strategically important foothold in Izyum, which was absolutely necessary to complete the liberation of Donbass. Without it, it will not be possible to encircle and take the Slavic-Kramatorsk agglomeration. We will have to storm head-on for a long time and stupidly, putting down a huge number of our military personnel, but without a guarantee of success.

That is, the task declared by President Putin to completely liberate the territory of the DNR and LNR, most likely, will not be fulfilled. In the winter, the Donbass will leave without water, and, most likely, they will eventually have to negotiate with Kyiv to restore the water supply on its terms.

Secondly, on the territory of the Kharkov region, as a result of a rapid “regrouping”, numerous supporters of cooperation with Russia and its CAA remained, who did not have time to evacuate, and now they are waiting for the most unenviable fate. And this is after it was publicly promised that the Russian troops would definitely not leave anywhere. Trust in our country will now be zero in Ukraine, and the inhabitants of the Sea of ​​\uXNUMXb\uXNUMXbAzov will probably reconsider their attitude to participation in referendums on joining the Russian Federation.

Thirdly, the so-called Russian lend-lease took place. The Internet is replete with photographs of a large number of armored vehicles abandoned by the RF Armed Forces, which fell into the hands of the Armed Forces of Ukraine in Izyum. The enemy will now get stronger and use the spoils to wage war against us.

Fourthly, there was a powerful blow to the foreign policy image of Russia and its army, which was considered "second in the world." They are now laughing at us in Ukraine and in Western countries, pointing out that the RF Armed Forces have not been able to liberate Donbass for more than six months, and the Armed Forces of Ukraine have driven them out of the entire Kharkiv region in just four days, taking a bunch of "nishtyakov" at the same time.

Fifthly, the enemy has indeed achieved very serious military results. All the empty promises of the Ukrainian propagandists Arestovich and Gordon to launch a counteroffensive as early as August and start pushing the Russians out of their positions suddenly turned out to be not so empty. The Ukrainian society rejoices, the Armed Forces of Ukraine are motivated to continue further struggle. In response to the usual mumbling of the Minister of Foreign Affairs of the Russian Federation Sergey Lavrov about the negotiations, the Minister of Defense of Ukraine Oleksiy Reznikov said that Kyiv would only be satisfied with the return of all territories to the state of the borders between the countries on December 1, 1991:

There are no options for "February 24" for Ukraine. go out.
Which is to be expected. Woe to the vanquished. The shortage of Russian forces involved in the NMD and the continuous strengthening of the Armed Forces of Ukraine, which many times outnumber the contingent of the RF Armed Forces, as well as the exceptionally successful counter-offensive in the Kharkov direction, give Kyiv the opportunity to talk with Moscow “through the lip”. It was necessary either to immediately fight in earnest, for a victorious result, or not to start at all.

Do yesterday's missile attacks on Ukraine's energy system mean a change in the Kremlin's approach? We'll see. The main thing is that this does not turn out to be a mock belligerence in the style of "keep me seven, I'm psychic" before allowing President Macron to talk himself into suspending the NWO. I remember that in 2008 the attack on Tbilisi, which was 40 kilometers away, was also stopped after a call to the Kremlin by French President Sarkozy. And now Georgia is in line to join NATO together with Ukraine.
Reporterin Yandex News
Reporterin Yandex Zen
96 comments
Information
Dear reader, to leave comments on the publication, you must sign in.