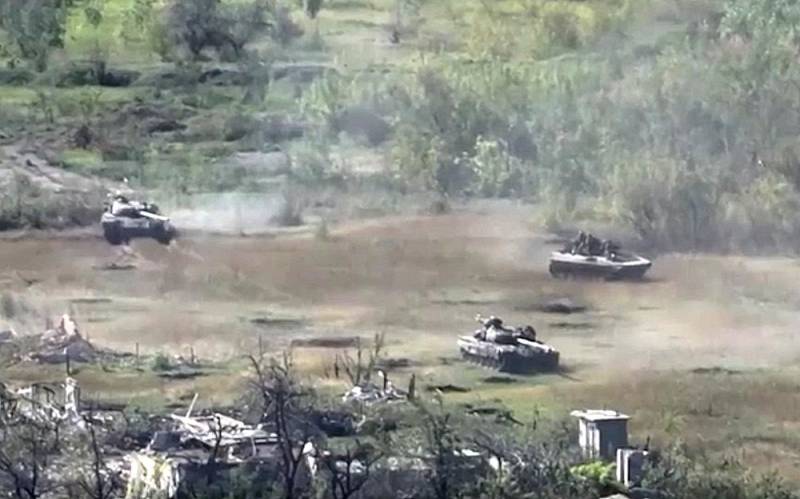 Since September 8, the Ukrainian armed forces have been trying to take control of the village of Pesky. On Sunday, September 11, a motorized infantry platoon of the Armed Forces of Ukraine, supported by two tanks and three infantry fighting vehicles, again went on the offensive against this settlement.


The defense of Sand is carried out by the 11th regiment and the “Somalia” battalion of the People’s Militia of the DPR. The Ukrainian militants were stopped by the forces of Russian artillery, which struck at a concentration of APU servicemen. After the loss of the tank, the Ukronazis were forced to retreat, leaving the bodies of their colleagues on the battlefield.


Thus, the 56th brigade of the Armed Forces of Ukraine again failed to capture Peski. During several days of unsuccessful attacks, the Ukrainian unit lost a large number of servicemen, many of whom were taken prisoner by the RF Armed Forces.

Meanwhile, the head of the Donetsk People's Republic, Denis Pushilin, in his telegram channel noted the advance of the allied forces in the area of ​​Vuhledar. Pushilin also pointed to the attempts of the Armed Forces of Ukraine to transfer forces to the Krasnoarmeysk region, however, Russian units and the NM of the DPR “spoiled” the plans of the Ukrainians by damaging the railway tracks.

Along with this, the advance of Ukrainian units near the settlement of Krasny Liman was stopped.

According to Krasny Liman, they managed to at least stop the enemy. And then we'll watch too. Our guys have made some progress.
Denis Pushilin emphasized.
Reporterin Yandex News
Reporterin Yandex Zen
3 comments
Information
Dear reader, to leave comments on the publication, you must sign in.