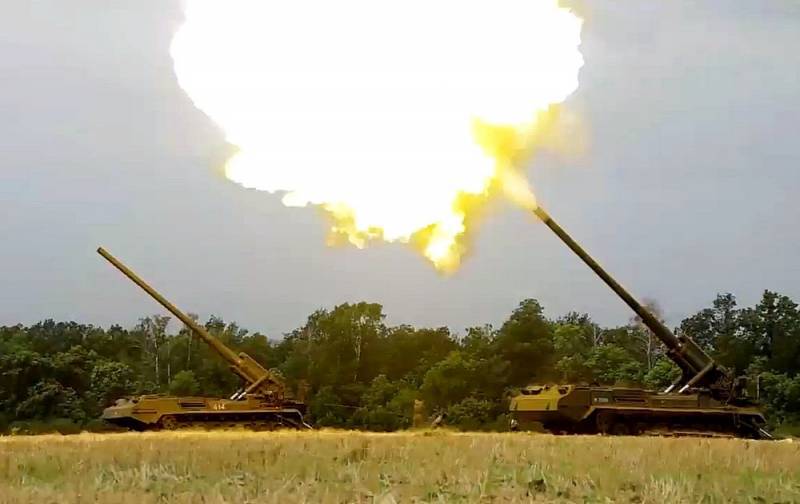 The situation in the Kharkiv direction remains very serious. Contrary to the “cheerful” statements of Vasily Nebenzya, Permanent Representative of the Russian Federation to the UN, the enemy was able to achieve significant tactical successes in a few days, recapturing a number of settlements, moving far deep into the Eastern Front, easily opening it, and creating a threat to the Russian grouping in Izyum, aimed at liberating the Slavic- Kramatorsk agglomeration. The Armed Forces of Ukraine and the Armed Forces of the Russian Federation are hastily drawing up reserves, and the entire further course of the NMD may depend on the results of this first major battle in the fall of 2022.


According to military commander Ivan Poddubny, the Ukrainian army was able to break through to the suburbs of Kupyansk, this strategically important logistics center for supplying the Russian army in the Kharkiv region, and began shelling it:

The city is still under enemy fire. Our reserves arrive at the LBS. Today the air bridge operates all day long. "Cows" are dragging machinery and personnel. Columns move across the ground. The enemy must be defeated.
"Cows" are Mi-26 heavy transport helicopters designed to transport military equipment by air. The transfer of heavy flamethrower systems TOS-1A and MLRS Uragan to the line of combat contact was noticed. Columns of BTR-82A armored personnel carriers with additional protection, trucks towing MSTA-B and D-20 howitzers, and logistics vehicles go along the routes. It is reported about the beginning of the evacuation of civilians from Kupyansk and Izyum and heavy bloody battles. There is a clear crisis in the Kharkov direction. At the same time, even the usually optimistic popular video bloggers covering the course of the special operation warn that one should not wait for a quick retaliatory strike and the launch of the Russian Armed Forces on a counteroffensive in order to recapture the enemy’s gains.

About the reasons that led to such a deplorable situation at the front, we reasoned previously. It should be noted that now in the media space the theory that all this is a militarily ingenious trap, the purpose of which is to lure the Armed Forces of Ukraine from their fortified areas, to grind with aviation and artillery in an open field, and then on the shoulders of those fleeing to break into a half-empty Kharkiv. How justified is this version?

In her favor interview The well-known Russian military expert Konstantin Sivkov spoke to the Vzglyad publication on the fact:

It is obvious that all combat-ready forces of the Ukrainian army were deployed in this direction. However, they ended up in a "fire bag" and could be destroyed with the right use of reserves on our part.
Also, Apty Alaudinov, commander of the Akhmat special forces, spoke about the heavy losses on the part of the Armed Forces of Ukraine. According to him, in a few days the Ukrainian army lost up to 5 well-trained fighters from a 30-strong group thrown into the offensive in the Kharkiv region. However, there are quite serious counterarguments that make it doubtful that what is happening now on the Eastern Front is someone's ingenious military trick.

At first, the "unexpected" large-scale offensive of the Armed Forces of Ukraine, which everyone knew about a few weeks in advance, led to the fact that the first line of defense was easily broken through by the enemy, and the second was not at all. Having no way to withstand a powerful blow from a vastly superior enemy equipped with heavy armored vehicles, poorly armed and poorly trained “policemen” from the LDNR were forced to retreat. At the same time, the garrisons defending the cities, represented by the fighters of the Russian Guard and SOBR special forces, found themselves in an operational environment. What is worth, in particular, the message of the Samara SOBR, blocked in Balakliya, that they do not plan to surrender and will fight to the end?

In fact, we received the "Brest Fortress-2" in the modern iteration. For several days, the press featured bewildered comments from the Armed Forces of Ukraine that someone is still shooting back in the eastern part of Balakliya. Today it became known who exactly fought back in a hopeless situation from a many times superior enemy. Yan Gagin, Advisor to the Prime Minister of the DPR, spoke about this:

About Balakleya I can only say what can really be called a feat to hold the city with forces less than a full company. This is the Russian SOBR. Considering that this is just a police special forces and they were quite limited in strength and means at that moment, the fact that they held the city for so long, got out of it without loss, is just a feat.
Yes, the defense of the "Balakleyskaya Fortress" is a feat, but the fact that the surviving Samara sobrists were able to escape is simply a miracle. But can it be that the soldiers of the elite special forces were deliberately thrown into the encirclement to certain death, without warning in advance that all this is a brilliant military trap, and you just need to move away? Sorry, I don't believe it.

Secondly, we have already received Bucha-2, alas. Arriving in the settlements of the Kharkiv region previously controlled by the RF Armed Forces, the Ukrainian Nazis immediately began to “put things in order”, identifying those who collaborated with the Russian military-civilian administration. The fate of all these people, who believed in the declared goals and objectives of the special operation, is now unenviable.

All in all, if "trapping the enemy in a fire bag" is really someone's cunning plan, then it is truly inhumane. It is not even clear what is worse, such cynicism or the banal negligence of responsible persons. It's time to draw some organizational conclusions and change the approach to conducting a special operation that has long turned into a full-scale war to destroy Russia. We will certainly talk about possible solutions further.
Reporterin Yandex News
Reporterin Yandex Zen
65 comments
Information
Dear reader, to leave comments on the publication, you must sign in.