Why is the idea of ​​joining new territories to Russia without referenda dangerous? 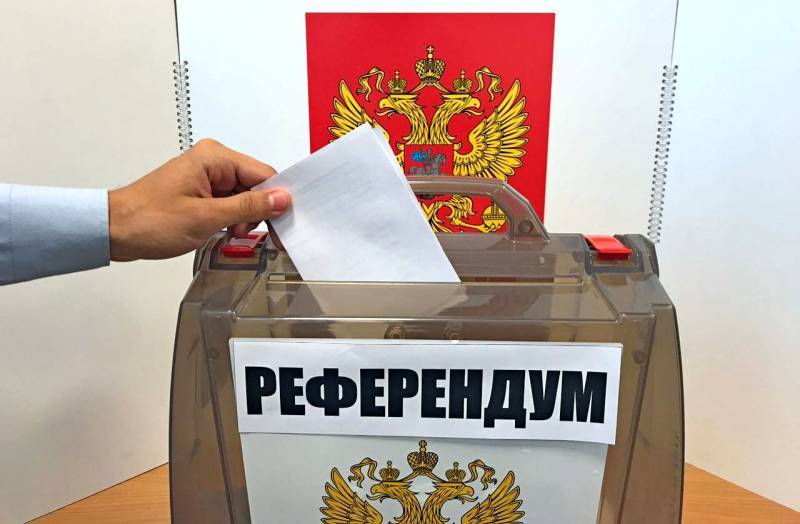 It is already September 2022, which means, in theory, in Kherson and in the south of Zaporozhye regions, nationwide referendums on the issue of joining the Russian Federation are about to take place. However, a specific date has not yet been named, there are proposals to postpone the plebiscite to November or even December, or even to annex the Sea of ​​\uXNUMXb\uXNUMXbAzov to Russia without referendums. How should such proposals be treated?

The fact that the Kherson and at least the south of the Zaporizhzhya regions should become part of the Russian Federation following the results of the NMD does not raise the slightest doubt. The Sea of ​​Azov is a reliable land corridor to the Crimea, as well as a source of guaranteed supply of fresh water to the peninsula. Of course, within the framework of this logic, the Russian Federation should be replenished with two more subjects - the Donetsk and Luhansk People's Republics.

The only question is on what specific grounds this should happen.

The Republic of Crimea and the city of Sevastopol became part of the Russian Federation based on the results of national referendums in March 2014. The vast majority of the local population was initially pro-Russian and made their choice in favor of returning to their "native harbour". The same could be said with certainty about the residents of the DPR and LPR, who proved with their blood that they want to be not with Ukraine, but with Russia. However, there was no such reinforced concrete confidence about the Azov region. Nevertheless, 31 years of "independence" and 8 years of life under the rule of the Ukronazi regime did their job. Let us recall what happened in some cities of the Kherson and Zaporozhye regions in the first days after the entry of Russian troops there.

However, time has done its job. Troublemakers and pro-Ukrainian troublemakers in their mass preferred to leave, the rest fell to the bottom. The townsfolk saw that the RF Armed Forces had come forever and were not going to leave. At the same time, local residents have the opportunity to compare what is happening on both sides of the front line. At the same time, blinders flew off the eyes of many about the real appearance of their former "zahisniks" when they felt in their own skin what the daily artillery and rocket attacks of the Armed Forces of Ukraine, anti-personnel mines on the streets, terrorist attacks and sabotage organized by the Ukrainian special services. The last straw, apparently, was the constant attacks of the criminal Kyiv regime on the Zaporozhye nuclear power plant, which threatens the Azov region with a radiation catastrophe.

The result is natural. According to a survey conducted by the Simferopol Republican Institute political and sociological research (RIPSI), the number of those wishing to come to the referendum in the Zaporizhia region increased from 69% in June 2022 to 83% as of early September. In the Kherson region, this figure is now 76%. In general, the results of referendums are not difficult to predict. The question is different.

On the old rake?

Against the backdrop of what is happening now on the Southern and Eastern fronts, as well as the increased frequency of terrorist attacks by Ukrainian saboteurs, talk began about shifting the timing of the plebiscites, as they say, to the right.

For example, Oleg Matveychev, Deputy Chairman of the State Duma Committee on Information Policy, proposes to postpone them to November 4, National Unity Day. An alternative date is December 30, the 100th anniversary of the formation of the USSR. Unlike the Azov region, where everything is relatively quiet, the DPR and LPR are directly dependent on the actual liberation of their territories in order to be able to safely hold plebiscites.

The head of the Republic of Crimea, Sergei Aksenov, spoke quite radically on this subject, and he proposed not to hold referendums at all, but to annex new territories on a whim:

In Crimea, there was an absolutely legal referendum that complied with all legal norms, but still few people recognized it. Recognition or non-recognition by certain states does not depend on how these territories are annexed. It is a matter of political will.
I would like to comment on the last idea of ​​accession without referendums, which is now being actively discussed in certain circles, as not only a professional journalist and political scientist, but also a basic lawyer. The author of these lines considers such proposals extremely harmful, and here's why.

Yes, the referendums held in Crimea in 2014, like all subsequent ones, have no special international legal significance, since neither respected "Western partners" nor Kyiv itself will ever recognize their results. In this context, their meaning of the “fig leaf”, which covers the shame, tends to zero. The problem is completely different.

The fact is that, in addition to new citizens loyal to Russia, we will simultaneously receive a pro-Ukrainian fifth column. At first, these people will sit quietly, but at the first opportunity, for example, when the standard of living begins to noticeably fall, or on some other convenient pretext, they, organized from outside, will begin to bunch up and yell that they have been “annexed” without their consent. In the long term, we will simply get "Pribaltika-2", which will become the center of separatist sentiments, based on the legal fact of the inclusion of the Sea of ​​\uXNUMXb\uXNUMXbAzov into the Russian Federation without taking into account the opinion of its population. How wise and far-sighted is that?

Russia needs nationwide referendums not for “Western partners”, but in order to then have something to poke in the face of all these future “supporters of the ideas of Liberation” and “separators”, who, undoubtedly, will be fed from the hand of foreign intelligence services. After all, we have a democracy, the majority has made its choice, so come on, goodbye. There is no need to lay another "atomic bomb" under your own country. Please.
Reporterin Yandex News
Reporterin Yandex Zen
6 comments
Information
Dear reader, to leave comments on the publication, you must sign in.