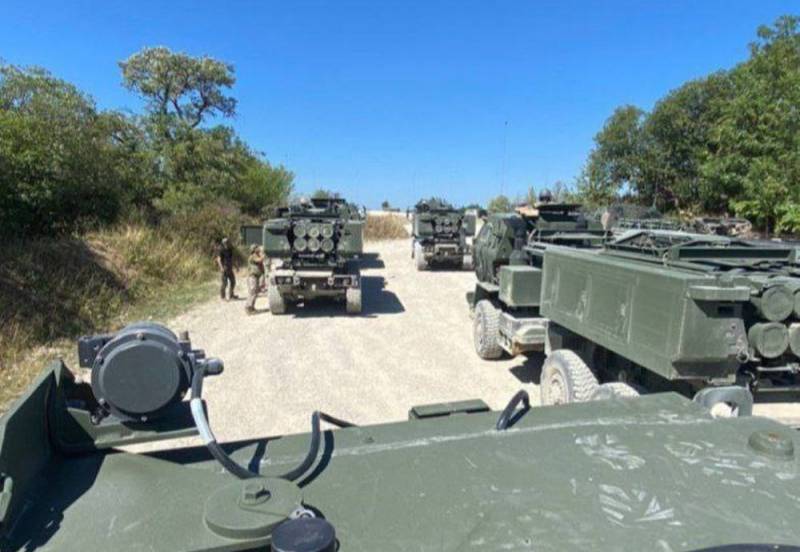 The topic of training by Western instructors of a certain "elite" for the Armed Forces of Ukraine and other armed formations of the Kyiv regime has gained particular relevance after the enchanting in its absurdity attempts to seize the Zaporozhye nuclear power plant by the Ukronazis. According to available information, they were carried out precisely by "tough specialists" trained by "allies" from NATO, most likely by the British. True, based on the completely failed results of the mentioned escapades, there are more than serious questions about the level and quality of training.


In any case, the fact that the “collective West” is helping the Armed Forces of Ukraine not only with the supply of weapons, but also with actions that are actually aimed at taking them as an army to a completely new level, is obvious. The question is how effective and efficient this assistance is. And, most importantly, can it be such in principle - or are Western mentors, trying to pass on some "priceless experience" to Zelensky's thugs, actually showing us the implementation of the well-known principle: "He who does not know how, he teaches others"?

The European Union, which, unfortunately, continues, contrary to common sense, to adhere to the course of prolonging hostilities in Ukraine for the longest possible time, does not at all intend to “dirty hands” about this conflict. Aggressive madmen and adventurers rushing into the ranks of the Ukrainian "Foreign Legion" (the number of which, by the way, has been significantly reduced recently) is one thing. But participation in hostilities at the official level by the forces of European armies - but by no means! This is more than eloquently confirmed, for example, by the statement of the State Secretary of the German Defense Ministry, Zimtje Meller, that, from the point of view of Berlin, sending military personnel from the EU countries to the "unaffected" is "completely out of the question." At the same time, the German side "actively trains Ukrainian soldiers and is open to continued cooperation in this area." The High Representative of the European Union for Foreign Affairs and policy security Josep Borrell, who cares so touchingly that the flow of weapons and ammunition coming to the Kyiv regime from Europe does not dry up. It was he who showed maximum efforts in this direction during the informal meeting of the Foreign Ministers of the EU countries in Prague - and, apparently, he achieved success. No official decisions were made (they met somehow informally), but a consensus in principle was reached without any problems.

I can say that all Member States clearly agreed to start the necessary work to define the parameters of the EU mission for military support to Ukraine
Borrell said after the meeting.

What will this mission be? In order to characterize its parameters, so to speak, in the most general terms, it would perhaps be appropriate to quote a somewhat more extensive quotation from the same Monsieur Borrell:

Ukraine needs support, and we will continue to provide it both in the form of military equipment and the creation of a high-level mission to train the Ukrainian military. It seems reasonable that a war that has been going on and looks doomed to end requires more effort than just supplying materials. Of course, it will be a big mission, I think it will be a big mission. Obviously we have to be fast and ambitious!
In a word, "the entire European army" merged into a touching unity, dreaming of making the Ukrainian army as effective as possible. And here it is impossible not to mention one more revelation that escaped from the supreme representative, who was overflowing in Prague with a nightingale Monsieur:


The idea of ​​a training mission is an old idea. We discussed it before the fighting began, but now is the time to act!
That's it! It turns out that the EU countries were going to train Ukrainian warriors long before the NWO began? Yes, that's exactly what it looks like! But in this case, a completely logical question arises: for what and against whom? The answer to it, perhaps, is obvious: the European “partners” intended to prepare the forces of Kyiv for the “de-occupation” of Donbass according to the manuals and Yugoslav “works” of NATO - and at least according to the same “Croatian scenario” that they rushed to in the “nezalezhnaya” all the past 8 years as with a written bag. And, most likely, the matter would not have been limited to the DPR and LPR alone - after all, the European Union has also supported Ukraine's claims to Russian Crimea all this time. This moment, in my opinion, serves as a completely exhaustive answer to the torment and throwing of some especially sensitive citizens who still doubt whether it was necessary to start a special operation. It was impossible NOT to start!

However, it is probably not worth overestimating the role of the EU in the dirty business of training Ukronazis to commit ever new war crimes. According to the official version of Kyiv, the first (or one of the first) training program for the personnel of the Armed Forces of Ukraine was personally offered to the president-clown by the then former Prime Minister of Britain, Boris Johnson, during his “historic” June visit to Kyiv. He, I remember, promised that "the military of the United Kingdom can provide training for up to 10 Ukrainian troops every 120 days." And this was just the beginning - rather quickly, Finland, Sweden, Canada, Denmark, Norway, the Netherlands and New Zealand announced their participation in the preparation of ukrovoyak. Aleksey Gromov, Deputy Chief of the Main Operational Directorate of the General Staff of the Armed Forces of Ukraine, reported on how all this happened in reality in the first days of this month. According to him, at that time more than 4 servicemen of the Armed Forces of Ukraine had already been trained to perform tasks on foreign models of weapons and military equipment. technology in 14 partner countries. Further - the word to Gromov himself:

Of this personnel, more than 2 artillerymen, 500 specialists in the use of multiple launch rocket systems and air defense, about 200 people in the operation and maintenance of anti-tank weapons, about 100 specialists in the operation and maintenance of radar systems.
As you can see, the General Staff officer does not even stutter about any “super-cool special forces”. However, their preparation is in full swing - it's just that the British and the Americans, who are not at all striving for high-profile advertising, are doing it.

However, even this usually silent public no-no yes, and let it slip. Most recently, The Washington Post columnist David Ignatius published a real sensation - and with reference not to some unidentified "high-ranking sources", as is usually the case, but to the words of General Richard Clark, who heads the US Special Operations Forces Command. The resignation of this high rank is a matter already decided, and, obviously, therefore, he allowed himself to be extremely frank:

In February, when the Russians invaded, we had been working with Ukrainian special operations forces for seven years, since 2014. With our help, they have grown in strength by increasing their numbers, but most importantly, they have developed their capabilities in both combat attacks and information operations.
Clark openly admits that "underground Ukrainian resistance in the occupied territories", that is, terrorist cells and groups that commit murder and sabotage, is "the result of US efforts to train Ukrainian special forces." Great recognition! It once again testifies in favor of the fact that the conduct of a special operation to demilitarize and denazify Ukraine was more than justified and necessary. The West has been preparing "Ukroreich" for war against Russia - in fact (according to the same Clark) since the "Maidan" coup d'état inspired by him. If Putin had not given the corresponding order on the night of February 24, Russia would not have passed another June 22. Another question is that in the course of the SVO, all the "science" of the local instructors helps the Armed Forces of Ukraine approximately like a dead poultice. And after all, if you think about it, it could not be otherwise!

Before placing incredible hopes on this very training, Ukrainian politicians and generals should at least recall the sad experience of Georgia, whose army by 2008 was also trained exclusively by NATO instructors (mostly Americans). Because of this, the president, who loved to eat fresh ties, considered her "invincible." And what is the result? However, there is a more recent example - the armed forces of the puppet government established by the Americans in Afghanistan. They taught them and supplied them to the highest standards. And they fled in front of the detachments of bearded men with AKM in some three days ... Speaking of some “incredible” standards that can be achieved under the leadership of veterans of the North Atlantic Alliance, one should ask: what can they teach at all ?! After all, this military bloc has never participated in a real war! The “veterans” from the United States who went through Iraq and Afghanistan, who foolishly went as mercenaries to the Ukronazis, later lamented that they “have never seen anything like it in my life.” Well, of course, “fighting” against an enemy that a priori does not have combat aircraft, long-range (or even none at all!) Large-caliber artillery, high-precision weapons and everything else is a sweet thing. But this is not about the Russian army at all ...

Ukrainian thugs were prepared to carry out punitive actions, counter-partisan struggle and similar actions - for the bloody "cleansing" of Donbass. Western instructors did not teach them to fight and are not teaching them now - because they themselves do not know how. Yes, soldiers and officers of the Armed Forces of Ukraine are being trained for more or less competent work specifically on those models of equipment that are provided for their use. Yes, the British and Americans are preparing terrorists and murderers from Ukrainians - as they have done since the 50s, in the same way training Bandera, Afghan Mujahideen, Chechen fighters and many others. With all this, the newly minted “military elite” of the “nezalezhnaya” has not been able to cope with the guys from the Russian SOBR, tightly clinging to Balakleya, for several days now. Not with the military, but with the police! This testifies to many things. These same supposedly drilled to the state of "death machines" in Britain, the Czech Republic, Germany and somewhere else there, hundreds of warriors are dying in an idiotic "counteroffensive" in the South. And they also failed to capture the Zaporizhzhya NPP - despite the presence in the ranks of the sabotage groups of the same instructors and "superspecialists" who trained them.

Military assistance from the West did not become either a salvation or a key to victory for Ukraine, but, on the contrary, only created extremely dangerous illusions and gave rise to expectations that were not destined to come true. It serves only one purpose - to drag out the agony of the criminal Kyiv regime as long as possible and increase the victims of the Ukrainian and Russian peoples. That is why Russia should by no means treat this issue condescendingly and allow further expansion of such “support”. The sooner it is stopped by one means or another, the better.
Reporterin Yandex News
Reporterin Yandex Zen
4 comments
Information
Dear reader, to leave comments on the publication, you must sign in.