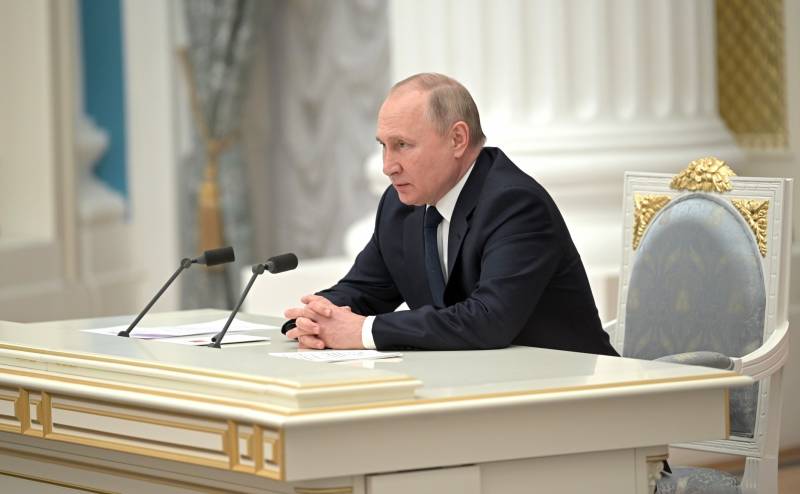 Yesterday's angry statements, first by Russia's permanent representative to the UN, Vasily Nebenzi, and then by President Putin personally, about the actual failure of the "grain deal" involuntarily caused a smile. Sad. Don't "respectable Western partners" deceive our Vladimir Vladimirovich too often?


Recall that the quadripartite agreement on the opening of the ports of Odessa, Chernomorsk and Yuzhny was signed in Istanbul on June 22, 2022. With the mediation of Turkey and the UN, an agreement was reached that Ukrainian grain would be exported to Africans and Arabs supposedly “swollen from hunger”. At the same time, judging by the statements of some Western military analysts, there, “over the hill”, this deal was perceived as a kind of “invisible shield” built over Odessa against the further expansion of the Russian army in the Black Sea region.

About what such a “grain deal” could ultimately turn out to be, we analyzed in detail in article dated June 16, that is, before its signing. Two months later, on August 8, we were able to take stock of the first interim results of this international agreement, which can be found at link. As we expected, there was no talk of any help to the starving Africans and Arabs from the very beginning. All food grain was exported from Ukraine before February 24, 2022, only feed grain remained there. It was exactly what European and Turkish farmers needed to feed their agricultural cattle and poultry. Instead of the countries of Africa and the Middle East, ships loaded with feed grain went from Odessa, Chernomorsk and Yuzhny to Turkey, Great Britain, Ireland and a number of other European countries.

It was assumed that in return Russia would receive free and transparent access for its food and fertilizers to the world market for the next three years. The nuance is that there is no direct ban on exports from our country, but there are serious restrictions on logistics, chartering of ships and their insurance, and settlement of payments, which significantly complicate the matter. The fact that there is no progress in this direction, some time ago, special representative of the Russian Foreign Ministry Maria Zakharova spoke with irritation. On the eve of the fact that the Russian part of the deal, unlike the Ukrainian one, is not being implemented, Vasily Nebenzya, Permanent Representative of the Russian Federation to the UN, said:

Not a single Russian ship has taken Russian grain out of Russian ports for export.

President Putin personally echoed him in a very expressive manner:

What we see is another blatant deception. And it’s not about us, it’s a deception of the international community, a deception of partners in Africa, in other countries that are in dire need of food, it’s just a swindle, a boorish and arrogant attitude towards those partners for whose sake all this was allegedly done.
Offended in his best feelings, Vladimir Vladimirovich threatened to consult with his friend and partner, Turkish President Erdogan, about the possibility of revising the terms of the “grain deal”. Yeah, who would have thought that the collective West could fool President Putin?

However, if you remember, it turns out that this is not the first time this has happened. So, for example, returning to the origins of the bloody conflict taking place in Ukraine, I would like to cite a fragment of an interview given by Vladimir Putin to his namesake Solovyov for the film World Order 2018, which talked about how the Maidan happened in 2014:

Now I will say something that is not known: at the same moment, our American partners also turned to us, they asked us to do everything, I am now saying an almost verbatim request that Yanukovych not use the army, that the opposition vacate squares, administrative buildings and cross to the implementation of the agreements reached on the normalization of the situation.

But if President Yanukovych used law enforcement agencies or the army to disperse the Maidan, like his colleagues Lukashenko in 2020 and Tokayev in 2022, there would be neither a coup d'etat in Ukraine, nor more than 8 years of "ATO" in the Donbass, nor the current special operation, which has long turned into a full-scale war with the use of all weapons, except (for now) nuclear. But Vladimir Putin believed his American partners, he said "okay", and they deceived him.

We also recall that as one of the justifications for the start of the special operation on February 24, 2022, it was cited that the collective West had brought its military infrastructure closer to the borders of Russia through the NATO bloc:

As you know, we were given promises not to move the infrastructure of the NATO bloc to the east by a single inch. All this is well known. Today we see where NATO is. Poland, Romania, the Baltic countries. They said one thing and did another. As we say among the people - they threw it. They just cheated.
It should be noted that this expansion of the North Atlantic Alliance to the east began a long time ago, but the last straw in the bowl of patience was the prospect of Ukraine and Georgia joining it. True, now Finland and Sweden are also joining NATO. This is sometimes the case, according to "respectable Western partners" and the solution of a complex problem is always postponed until later. Well, it does not behoove a former KGB staff member and a certified lawyer with all his intelligence officers, advisers and analysts to be so gullible, in fact.
Reporterin Yandex News
Reporterin Yandex Zen
46 comments
Information
Dear reader, to leave comments on the publication, you must sign in.