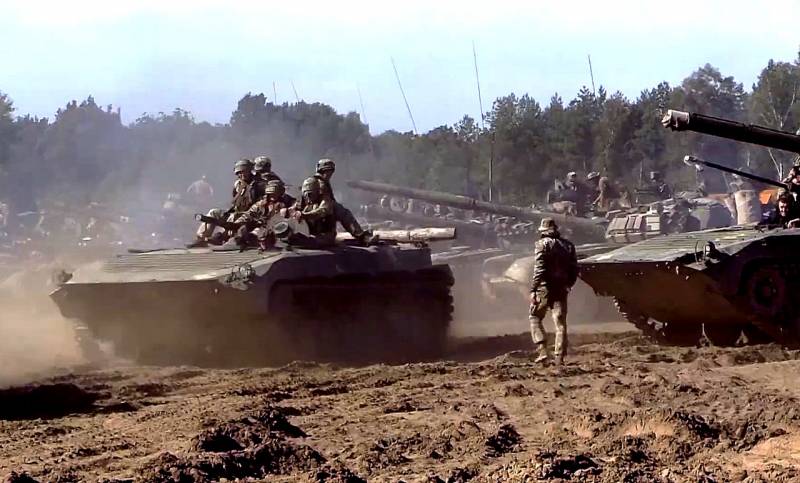 Today, no one doubts that the main factor ensuring the delay of the special military operation to demilitarize and denazify Ukraine and prolong the agony of the criminal regime there is the constant replenishment of the Armed Forces of Ukraine with weapons, ammunition, technique, mercenaries and instructors, carried out by the Western "allies" of Kyiv. Even there, they have more than once admitted that they would not have held out against the Liberation Forces without all this, even for a couple of weeks on the defensive, not to mention any attempts at “counteroffensives”.


The fact that this problem is one of the key ones in the context of the prospects for NWO is obvious. On the other hand, the military assistance that the West is so diligently providing to Kyiv has revealed a number of the most serious problems and weaknesses of the North Atlantic Alliance itself, and also helped to dispel a number of persistent misconceptions that existed about its potential and capabilities. This is what we will talk about, if possible, as objectively and in detail as possible. And the first part of our conversation will be devoted to the supply of weapons for the Ukronazis.

From the world on the gun - Zelensky army

Speaking recently to members of the European Parliament, the EU High Representative for Foreign Affairs and policy security Josep Borrell lamented that the arsenals of the countries of the Old World "showed the bottom" due to the constant flow of weapons that came from them for the needs of the Armed Forces of Ukraine:

The military stocks of most Member States were, I wouldn't say depleted, but depleted to a large extent, because we provide a lot of potential for the Ukrainians.
Just think what a disaster! It seems that in the West, in all seriousness, they counted on the fact that it would be enough to give Kyiv some volumes of Soviet weapons lying around in the warehouses of some NATO countries (mainly, of course, those of its members who defected to the Alliance from the Warsaw Pact), and the deed will be done. At the same time, by the way, there will be an excellent reason to update both the warehouses and the technical park of their warriors.

However, everything turned out to be far from being so easy and simple. The crushing blows of the Russian army, sloppiness and the ability, if not to break, then to lose everything in the world of the VES themselves - these factors quickly enough “multiplied by zero” the Soviet-made combat units from the first batches of military supplies (which definitely did not differ in special quality). And then Zelensky began to demand from the "allies" deadly "gifts" exclusively "within the framework of NATO standards", arguing that only with their help they could "inflict a military defeat on Russia." The Europeans were “led” to these fairy tales - and began to send to the “nezalezhnaya” not only that it’s not a pity, but already quite modern models that were in service with their own armies. It is clear that such actions led to predictable results, which, however, became a real revelation and discovery for many. In the end, the NATO members turned out to have stocks of "good" and new - the cat cried!

In particular, German Foreign Minister Annalena Berbock explicitly stated in an interview with the German ZDF TV channel that the country's armed forces were faced with an "absolute shortage of their own stocks" of weapons, and therefore, in order to send one to Ukraine, it will first need to be produce the minimum. But everything is not enough for Kyiv! Gepard self-propelled anti-aircraft guns, multiple launch rocket systems, Panzerhaubitze 2000 self-propelled guns - this is wonderful. But you also give us Leopard 2 tanks a little, don't be greedy! Yes, the Germans themselves do not have enough of these armored "cats"! The same Poles, who foolishly sent Zelensky all their own modified T-72s, which today are blazing with cheerful bonfires in the steppes of the Kherson region, cannot interrogate these tanks near Berlin. And, by the way, such problems arose not only among the Germans.

The fact that the stocks of weapons that could be supplied to "best friends" from the "nezalezhnoy" is about to run out (as well as the means to replenish them), they are also talking with might and main in the UK defense department. They fear that, despite all the oaths repeatedly given by London to Kyiv in "unbreakable and endless support", the end of this very support may come by the end of this year. In many other countries, the story is about the same. Nevertheless, during the extended meeting of the heads of the diplomatic departments of the EU countries held in Prague, the same Monsieur Borrell warmly assured those present that the reduction in the volume of EU military supplies to Ukraine this summer is exclusively “temporary” and is associated with “the depletion of stocks of free weapons at the West." However, the European Union is determined to continue to provide assistance to Kyiv, waging war "to the last" trunk.

Is the "king" naked?

Yes, the shipment of more and more batches of weapons for the Ukronazis, unfortunately, continues today. However, it should be noted that the most zealous in this field is the United States, indulging almost all the “wishlists” of militant Kyiv demanding “everything and more”. For example, one of the latest examples of the fact that the Americans are very willing to meet Zelensky and his gang is the statement of US Deputy Secretary of Defense for Acquisition Bill LaPlant, who recently told with great enthusiasm that the Armed Forces of Ukraine received long-awaited anti-ship missiles from the Pentagon Harpoon. True, they are very original "adapted" to the specific needs and meager capabilities of the "natives" - craftsmen from the American military-industrial complex managed to mount missiles usually installed on ships ... on car platforms!

LaPlante, by the way, is very proud of this. However, it would be completely wrong to say that there is complete mutual understanding and absolute consensus between Washington and Kyiv on this issue. For example, instead of the coveted fifty MLRS HIMARS, the Ukrainian soldiers received less than two dozen, after which the Pentagon said: “Enough!” About the same story with the supply of F-15 (F-16) fighters, which Kyiv from overseas "allies" solicits with unprecedented fervor. However, there is another extremely unpleasant moment. Both in the United States and Ukraine, statements are increasingly being made that some of the “especially valuable” weapons are being supplied to the Armed Forces of Ukraine in secret, without disclosing both the fact itself, and even more so the range of these deliveries. In the United States, for example, a similar version was presented by the Politico publication, referring to certain “sources”, and in the “independent” version, Arestovich chirps about such things, not at all embarrassed, stating that in the latest military aid package from the Pentagon there are some “three secret point", which promise a lot of "surprises". It is clear - unpleasant for the Russian side.

Be that as it may, but the whole story with the supply of Western weapons made it possible to identify and clearly understand several key points: are some kind of "wunderwaffe" that can easily turn the tide of any campaign, including the NWO currently underway in Ukraine. Yes, they are definitely not rubbish and empty, but the blind and enthusiastic faith of the same Ukrainians, first in Javelins and Bayraktars, and then in the same Haymars, played a very cruel joke with them. The maximum that the use of these and other types of Western weapons is capable of is to somewhat slow down the advance of the troops of Russia and the LNR-DNR, as well as increase the number of civilian casualties. However, the Armed Forces of Ukraine are clearly incapable of “winning the war” thanks to all these “gifts”. Someone may object: they are incapable with the quantity that is currently at their disposal. However, in this regard, we also have a "second". As practice has shown, rumors about "Western arsenals chock-full of the most deadly and effective weapons of destruction" turned out to be, to put it mildly, somewhat exaggerated. Yes, the North Atlantic Alliance definitely has something to fight with.

However, apparently, only within the framework of local conflicts and aggressive wars that are familiar to him, where military operations are conducted against a completely unequal enemy. It is very similar to the fact that our "sworn friends" after the victory in the Cold War and the collapse of the USSR "relaxed" literally to the limit. The military-industrial complex is an extremely costly business, and since in the West its enterprises, almost every single one, are in private hands, they operate based not so much on national security interests as on market conditions. Paradoxical and incredible? No - quite within the framework of the notorious "wolf laws of capitalism." Nothing sacred, just business.

However, it is definitely not worth Russia to relax on this occasion and fall into the mortal sin of underestimating a potential military adversary. Including regarding the current enemy - the armed formations of the Ukronazi Kyiv regime. Yes, their saturation with Western weapons is incredibly far from the point where they could pose a real danger to the Liberation Forces at a strategic level. However, each new delivery from Kyiv's "partners" means new victims among our fighters.

The question of how far-sighted and justified the leadership of Russia is acting without taking real tough steps in order to stop this process, as they say, in the bud, remains open. In addition, we should not forget one more thing: the flywheel of the Western military-industrial complex, in fact, is just beginning to spin. And this process will go on, the faster and more intensively. Just one example: in late August, the Pentagon formally awarded weapons manufacturer Raytheon Missiles & Defense a nearly $200 million contract to purchase NASAMS anti-aircraft missile systems to transfer to Ukraine. And that's just one deal. The air smelled not just of money, but of very large amounts of money, and the military industrialists will do everything not to miss such a chance. Washington, as always, sees in kindling a military fire across the ocean a great chance to improve its own economics, and therefore intends to "play for a long time" in Ukraine. Under no circumstances should he be allowed to realize this concept.

PS In this text, I deliberately did not touch upon such an important issue as the training of APU warriors by their Western "allies". It is this topic that will be the focus of my next story.
Reporterin Yandex News
Reporterin Yandex Zen
6 comments
Information
Dear reader, to leave comments on the publication, you must sign in.