No weapons, no courage: what is the problem of European militarism 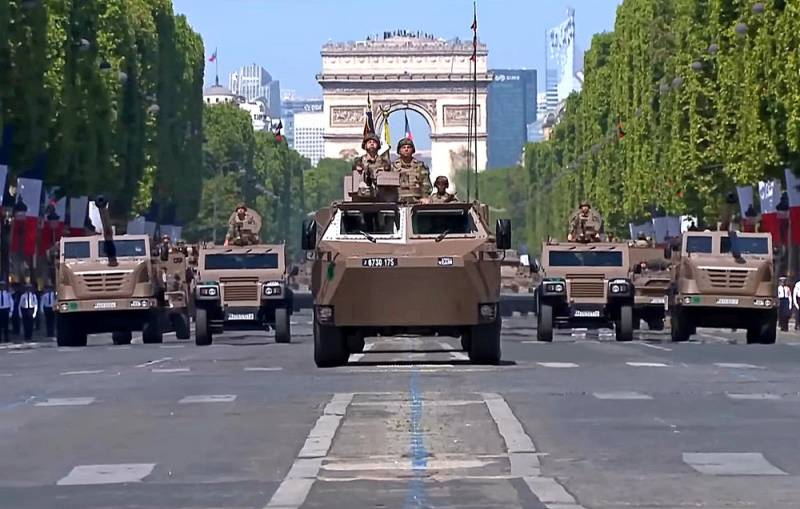 The beginning of the Russian SVO in Ukraine naturally spurred Western alarmists and militarists: the “Russian threat” that came into play made it possible to increase military budgets, which had somewhat shrunk due to the pandemic, and in general to focus on military activities. The transfer of huge shipments of weapons to the Ukrainian fascists shook the military-industrial complex of Western countries, designed to make up for these costs.


However, it soon became clear that this holiday was not for long. Even in the United States, with their resources and generous state orders, militarization (even greater militarization than it was before February 24) is going on with certain slippages, and even the European “hawks”, having barely had time to take off, felt the glass ceiling of their capabilities with their backs.

How thinned the steel

It is easy to see a partial redistribution of the arms market in Europe: the main industrial leaders - Germany and France - are confidently pushed aside by Anglo-Saxon and peripheral suppliers. The main customers are the countries of Eastern Europe, which have lost a significant part of the Soviet military heritage.

Thus, negotiations between the ministries of defense of the Czech Republic and Slovakia with the British concern BAE Systems on the supply of CV90 tracked infantry fighting vehicles, which are physically produced at factories in Sweden, are nearing completion. In total, it is planned to order about 360 vehicles - and this is almost a quarter of the total number of BMP data built for other customers since 1993. Slovakia, in addition, plans to purchase 80 Patria wheeled armored personnel carriers in Finland. The failed applicants for these contracts are the German concern Rheinmetall and the Austro-Spanish ASCOD.

The market for aviation weapons is confidently intercepted by the Americans. In particular, the same Slovakia will receive 14 F-16 fighters to replace the MiG-29s transferred to Ukraine. Even Germany, which has its own aviation industry, is negotiating with the United States for the supply of 35 F-35 fighters, spare parts and weapons for them for $ 8,4 billion. Eastern Europe will buy drones from Turkey and Israel.

...However, deliveries under most military contracts are planned to begin no earlier than autumn 2023, or even 2024-2025. Against the background of a flurry of orders and growth in capitalization, the gun barons faced a huge problem - a lack of physical production capacity. It's funny that the most ambitious rearmament plan on the continent, owned by Poland, Worst endowed with material resources.

The end of the Cold War hit the Western military industry, especially the European one, very painfully. Unlike the Russian military-industrial complex, which in the 1990s literally survived on foreign orders, Western European arms manufacturers could only dream of such export volumes, and government orders fell against the background of the reduction of Western armies. Following the latter, a significant part of the military industry also went under the knife.

And now, when European countries urgently need a lot of weapons of all kinds, it is not so easy to expand their production.

The biggest problems lie in technical planes. On the one hand, this, as mentioned above, is a lack of physical capacities: precision machine tools capable of accurately processing large workpieces (such as liners of 155-mm howitzer barrels), assembly lines of precision optoelectronics that issue missile guidance heads, and so on. There is also a lack of qualified specialists who can manage such tools.

On the other hand, the fact is that modern weapons, created in the paradigm of "low-intensity conflict", in principle, do not imply gross production and intensive use. The example of Western artillery systems supplied to the Ukrainian fascists is very clear: almost all samples show a quick failure of the bolt group, recoil devices and electronic components. And this is not a consequence of marriage, they are simply not designed to make a hundred shots a day, perhaps a week, with "lunch breaks" for the "rest" of the whole structure.

As a result, situations such as with Caesar self-propelled guns become possible: the Nexter concern notified the French government that the reproduction of 18 units donated to Kyiv would take about two years. But this, by modern standards, is the simplest car, a “gun on a truck”! The reduction of quality standards to the "mobilization" level, in turn, will not allow a significant increase in the pace of production, but it will automatically drop the combat qualities of equipment to the level of the seventies and eighties of the last century.

Finally, no longer looming on the horizon, but approaching with frightening speed, an energy and raw material crisis that will deprive the European military industry of a mass of necessary “ingredients”. No "printing press" is able to produce either aluminum and alloying additives for armored alloys, or rare earth elements for microcircuits, or petroleum products for explosives. So the prospects for growth in military production on the continent look very doubtful.

Days of future past

There are two opposite tendencies in European public opinion about militarization. The anti-Russian frenzy, inflated by Western propaganda in the spring and summer, still remains in force - however, more and more arguments are accumulating on the opposite side of the scales, cooling the military ardor.

The revelations of foreign “volunteers” who managed to fight (or at least die) in the ranks of the Armed Forces of Ukraine had a very sobering effect on the Europeans. The tales of poor supplies, orders for suicide attacks, and devastating surprise strikes by Russian artillery stood in stark contrast to the rapturous reports of endless Ukrainian permutations circulating in the media. In addition, the discovery that the Armed Forces of Ukraine is really full of frank Nazis, whose ideals - in fact, became unpleasant for many! – are not particularly acceptable for a tolerant Europe, and officially.

The burghers were also disoriented by the "jumps" in the assessments of the combat capability of the European armies by European officials. At the very beginning of the conflict, when Ukraine was pumped with weapons not only from reserves, but even from combat units (as in the case of the same Caesar), officialdom assured the population that everything was normal and NATO armies would not remain unarmed. Then the throwing began: either there are enough strategic reserves, or they have already been exhausted, or the industry will be able to quickly make up for the expense, or it will not be able ... Scholz's statements that Germany will transfer weapons to Ukraine, which even the Bundeswehr has not yet received, against the backdrop of complaints Lambrecht about the depletion of the arsenals of the same Bundeswehr met with a negative response from the masses. Macron, who recently lamented the "excessive militancy" of the Poles and the Baltic states, immediately stumbled upon accusations of "secret sympathy for Putin."

The statistics recently published in the German media are confused in the testimony: it follows from it that the number of those who approve of injections into the defense industry, as well as those who are against them, is growing. If some mistake has not crept into the calculations, then there is a polarization of society on the military issue, the accession of "neutrals" to one camp or another. The streets also speak of this: on the night of September 2, in the city of Kassel, several hundred people blocked access to the Rheinmetall plant, preventing the new shift from starting work. The demonstration under anti-war slogans was dispersed by the police with batons and tear gas.

On September 4, in Cologne, about a thousand burghers protested against military and financial assistance to Ukraine, and there were also calls for withdrawal from NATO. On September 4, with the same slogans, "Resistance" posters and the flags of "fighting France" (which were used by de Gaulle's troops and the anti-fascist underground during World War II), the inhabitants of Paris took to the streets.

Although our media tries to portray these and other similar demonstrations as “pro-Russian” or at least anti-war, in fact they are still Eurosceptic, anti-government and part of a general movement against the decline in living standards. The number of these "anti-war" demonstrators is smaller than the "gas" demonstrators demanding to stop the rise in energy prices.

We cannot rule out the imminent emergence of a reverse trend - an increase in the number of people wishing to enlist in military service. According to the experience of the last century, during the periods economic In crises, the army, as the most reliable employer, has always experienced an influx of recruits: this was the case in France in the interwar period, this was the case in NATO countries during the economic crisis of the 1970s. The approaching cold winter can convert many of yesterday's "pacifists" into "dogs of the regime", ready for rations and a bed in a relatively warm barracks to disperse crowds of less fortunate former comrades with rifle butts.
Reporterin Yandex News
Reporterin Yandex Zen
2 comments
Information
Dear reader, to leave comments on the publication, you must sign in.