"Farewell of the Slav": foreign agents against patriotic education in Russian schools 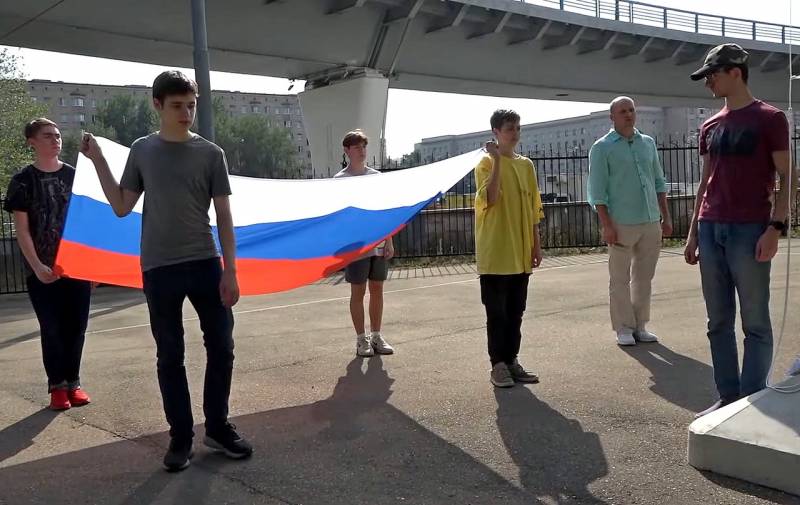 The new academic year has brought a number of innovations to the programs and regulations of Russian schools. In addition to the next steps towards the unification of the educational process, limiting the use of phones during lessons, the fight against "voluntary" extortions, a couple of ideological elements have appeared: the beginning of each school week will be marked by the ceremony of raising the flag of Russia and a class hour with a patriotic bias called "Conversations about the important" .


Russia's biggest patent admirers - foreign-based media agents - reacted to these novelties very violently. In the last few days of the holidays, their publications on the topic of "Russian aggression" have noticeably diluted the articles about "brainwashing in Russian schools."

InoSMI claims that as part of “talking about important things,” schoolchildren will allegedly be introduced to “imperial habits,” including “justifying aggression against Ukraine,” “antagonism with the West,” and the list goes on. In general, foreign agents are trying to present these lessons as some kind of "forty minutes of hatred" aimed at educating stupid blockheads - "Putin's slaves."

Special emphasis is placed on the "justification of aggression": the so-called liberals are terribly hurt that the exploits of our soldiers - participants of the NWO - "but not the" exploits "of Irpen and Bucha!" The videos contain excerpts allegedly from official manuals for “conversations” in which a special military operation is directly indicated.

It is not clear, however, where the same "Rain" * obtained these same training manuals: in the public domain, including on official website of "Conversations about the important", there are materials only for the first lesson, which took place on September 5 and dedicated to the Day of Knowledge; A search on the web has also brought no results. What happens, did foreign media concoct another fake or anonymous well-wishers from the Ministry of Education leaked materials to “sworn friends” in advance?

So far, I can't confirm either one or the other. On the other hand, it is clear that, judging by the titles of the topics, the program of patriotic education is supposed to be extremely “neutral”, emasculated, in fact, historical and social science, and not ideological. Such “conversations” within the walls of schools have been conducted with greater or lesser intensity for almost two decades, some in the programs of humanitarian subjects, some on occasions of solemn or memorable dates. And yes, military exploits, from Prince Oleg to the present day, have always been cited as examples of patriotism for obvious reasons - understandable to everyone except the "liberal opposition".

A separate reason for hysteria in the foreign media and part of the foreign media is the ceremony of raising the flag of Russia. There are a lot of arguments: starting with the fact that it will be held before the lessons, which means that the children will not get enough sleep, and ending with ... right, the current “shamefulness” of the flag of the “aggressor country”, on which the red color now means “the blood of innocent Ukrainians” . The German news agency ZDF somehow calculated that 17 million euros were spent on flags for Russian schools - “but this money could have been spent on something useful!” There is no doubt that if we were talking about the white-blue-white flag of the “beautiful Russia of the future”, invented by the TsIPSO for the “anti-Putin resistance movement”, then the foreign agents would break their hands in applause, and no spending on them would be too high .

In addition, foreign "patriots" are unhappy with... the ban on the use of smartphones during lessons. The real reasons for the introduction of this rule are obvious: “sitting on phones” was a problem back in the XNUMXs, when mobile phones had buttons and monochrome screens the size of two nickels. But other media give their own version: they say, this was invented so that children could not record the facts of “moral violence” against them, including, of course, “ideological indoctrination”. It's funny that a lot of emphasis is placed on the safety of smartphones for health (although I would argue about the "benefit" of these for vision).

At the suggestion of the so-called Alliance of Teachers*, foreign media and many bloggers on educational topics (including current teachers and pseudo-teachers) are actively promoting the sabotage of patriotic education. Parents are strongly advised not to allow their children to raise the flag, write some kind of statements about refusing to attend “talks about important things” addressed to school principals, disavow the information received by the child in a personal conversation, etc.

To understand who “recommends”: in July, Alliance * admitted that it leaked the personal data of Russian teachers who volunteered to work in the liberated territories of Ukraine to several foreign media outlets (from where they most likely got into the SBU) with excellent justification - “these teachers are now occupiers.” The "good advice" of such an organization certainly deserves full trust.

Without slipping into a hostile narrative, I still want to note: for all the importance and relevance in its current form, the program of patriotic education is not without a number of real shortcomings. The saddest thing is that a significant part of them are outside the actual school - deep in the "genome" of the current Russian state, which means that it is simply impossible to eliminate them by editing the program itself.

As you know, there is no official ideology in Russia. In practice, it still exists in the form of “creeping decommunization” - but again, devoid of any official standard: “we are canceling this, we are renaming this, but we leave this as it is.” This results in a completely spontaneous eclecticism of "Slavic", royal and socialist ideas and images, the proportion of which varies from occasion to occasion and from region to region. This was especially clearly manifested during the NWO, where the Russian and "imperial" tricolors, the Banner of Victory and the Orthodox banner can simultaneously fly over the same column of ours.

A natural question arises: what kind of image of today's Russia and Russia of the future is supposed to be introduced into the minds of young people? The question is not idle, because the next "talk about the important", which should take place in all schools in the country on September 12, is marked: "Our country is Russia."

And then, within the framework of the program, lessons are scheduled about the Day of National Unity (which for the majority of the population is still “just a day off”), state symbols, the multinational character of Russia and other large and difficult topics that require some kind of solid “basic” interpretation, from which can be repulsed. Unfortunately, the manuals for September 12, as mentioned above, are not yet available for viewing, and it is impossible to assess the image of Russia, according to the authors of the program.

But here we come across a second drawback. I can’t claim to be 146% sure, but it seems that, in general, the program exists only in outline, and its content is generated on the fly. Moreover, we are talking about complex issues: if everything is quite clear on Tsiolkovsky’s birthday or, say, Mother’s Day, then you cannot approach obviously ideologized topics from the “neutral-academic” side, and the recommendations are composed in a genuine “paroxysm of creation”.

And here it is not only the absence of any “main ideological Talmud”, but also the eternal bureaucracy. The direct executors of the initiative “to do well” launched from above do not fully understand what they want from them, they are afraid that “if something does not work out”, they postpone the decision until the last moment and in the end give out something that can formally be passed off as a result.

In general, there is every reason to believe that "talking about important things" will have the same fate as the subject "Fundamentals of Religious Culture and Civil Ethics." Many copies have been broken around the latter - as a result, it seems to have been introduced, but it is practically not taught almost anywhere (in any case, according to the statements of school teachers personally known), and almost certainly some kind of record of “work done” is kept on it. There is an opinion that in practice the time of "talk about important things" will be used for more or less typical classroom hours, except in cases of any checks.

Moreover, it is quite possible that teachers secretly sympathetic to hostile ideas use state clocks to propagate these same ideas to children. Cases when teachers told children about the “aggressive invasion of Putin’s military in Ukraine” are known, some of them were actively promoted by foreign media as examples of “micro-resistance on the ground”. Just the other day, in a kindergarten in Chita, pupils were presented with certificates with a Ukrainian trident supposedly by accident: “We downloaded the first template that came across from the Internet, don’t judge strictly!” In this case, however, the head and teacher were fired - fair from any point of view, but how many such cases can we expect in the future?

In the pedagogical environment, as well as in the ranks of the "intelligentsia" in general, there is a large percentage of those who are "critical" about the state and its policy - “critically” is in quotation marks, because often we are talking about scolding from pro-Western positions. “Conversations about the important” with a formalist attitude towards them on the part of the management can provide these people with an excellent platform - after all, federal materials are advisory in nature, and the teacher is free to plan the lesson in his own way. They will also find the support of some of the parents, who are just as "critically" tuned.

So at the moment I'm looking at Talking Big with a lot of skepticism. The initiative is necessary and almost timely (more precisely, like many other things, “it was necessary the day before yesterday”), but the implementation so far does not give the impression of a real approach. I hope and I will be glad to be mistaken in my assessment.