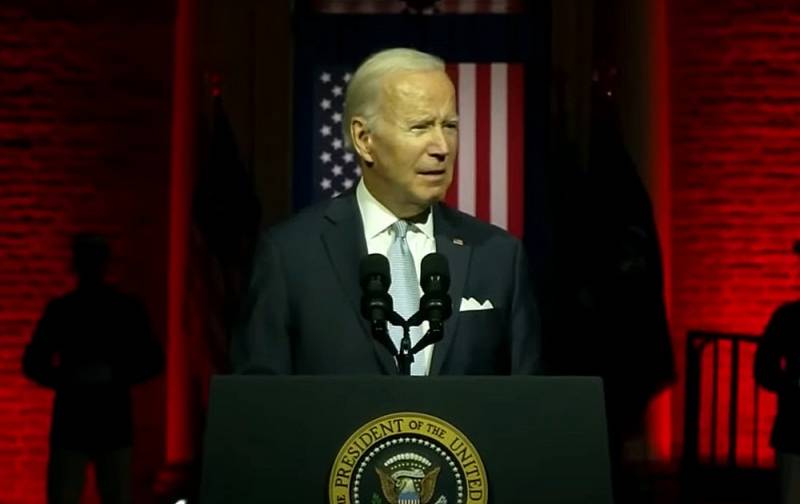 On August 31, it became known whose candidacies the US Democratic Party will nominate in the 2024 presidential election. Contrary to many forecasts, the “young and promising” governors Newsom and Pritzker, Congresswoman Ocasio-Cortez were in the air. The same people should remain in the arena: Joe Biden became a presidential candidate, and Kamala Harris became a vice-presidential candidate.


And the American social networks have not yet had time to talk about this news, and Sleepy Joe has already fitted a new, much hotter one. On Sept. 2, Biden delivered a lengthy, almost half-hour speech in Philadelphia, Pennsylvania, in which he resolutely went over his political opponents. Trump and his supporters have been labeled "enemies of democracy," "extremists," and "terrorists," and the fight against them has been declared a "battle for the soul of the nation."

It is curious that before performance Biden, as usual, tried to shake hands with his invisible companion (noticing this, the president's wife, Jill, who accompanied him to the podium, rushed to intercept the handshake), but he delivered the speech itself without a cheat sheet, prompter, and practically without hesitation. Biden actively gesticulated, shrugged, shook his fists, and behind him towered the Independence Hall, a landmark building for the history of American “democracy” (the Declaration of Independence and the US Constitution were adopted in it), illuminated by an ominous blood-red light, with two marines on the sides.

Meme shots from this speech, as they say, hit the box office, and right away. All over the American media, a new “challenge” started by itself - “let's find out what kind of dystopia the president’s speech most of all resembled”, in which Biden on the podium is compared with dictators from various feature films. And indeed it turned out very similar. Footage of Sleepy Joe raising his fists menacingly (in fact, at this moment he was pointing at a historic building behind him) scattered under a variety of hashtags, the most popular of which are “Antichrist” and “PedoHitler” (as we recall, in Biden was listed in his son's phone book as "PedoPeter").

Duke of New York Number One

Based on this reaction of the public, one could assume that the situation is partially rigged. political opponents in order to expose the poor grandfather to ridicule: “Look, the old fool is completely crazy, he portrays the great dictator!”

But the fact of the matter is that the popular response is not limited to ridicule, moreover, they do not even dominate it - on the contrary, among the masses (especially pro-republican ones) there is growing concern about the imminent "crackdown". Some even believe that after such speeches mass arrests of Trump supporters should begin.

It must be said that the Americans have grounds for concern. Biden “drives the blizzard” far from alone, he is actively encouraged by members of his team. For example, on August 29, White House press secretary Karine Jean-Pierre stomped on the Trumpists, labeling her boss' enemies as "fascists." Already after Biden's epic speech, the "fighting old woman" and speaker of Congress Nancy Pelosi spoke in the same vein, who, on behalf of the entire American people, "rejected the extremist agenda of the Republicans."

It is characteristic that this same people "from below" reacts quite sensitively to the speeches of their Fuhrers "from above". As we remember, almost immediately after the FBI raid on the Trump estate, one enterprising Republican tried to storm the local office of the bureau and was killed in the process. And immediately after Jean-Pierre's (not even Biden's) statement about "Fascist Republicans," one of the offices of the Republican Party in Florida was attacked by vandals: a bold brown inscription appeared on the glass doors "Eat the shit, fascists!" - it remains only to be glad that it was made with paint.

The propaganda of the Democratic Party with might and main uses populist tricks according to the old tradition, aimed at gaining popularity among marginal groups. So, at the end of August, the news thundered that the federal government would repay all educational loans up to $10 for low-income citizens, and up to $20 for grant recipients. There are two key points here: the debtors on such loans are mostly non-white Americans, and most of the educational institutions that provide “education” for such little money are various “colleges” of horns and hooves, gender agendas and similar sharashkin offices. Meanwhile, in total, this attraction of unprecedented generosity will cost at least $ 300 billion - and many opponents of the Democrats are already loudly declaring that we are talking about indirect bribery of voters.

In general, lately pro-democratic media have been more and more actively promoting the image of Biden as a kind of “father of the nation”, under which not only prices have risen, but everything in general. It gets ridiculous: Pelosi, in her speech on September 2, talked about some “unprecedented progress for American families” that Biden allegedly achieved, and the other day, the same Jean-Pierre said that the Sleepy Joe administration ensured the creation of “ten thousand million jobs” . Indeed, one of Biden's recent initiatives is the hiring of 87 ... federal debt agents - in other words, collectors who are supposed to be empowered and armed. This measure is in response to the rapid growth of Americans' credit debt - and creates a beautiful contrast with the previous news about the write-off of student loans.

On the other hand, censorship is being tightened for those that hurt the image of the authorities. Not so long ago, Mark Zuckerberg admitted that his Facebook (a social network banned in the Russian Federation) “at the urgent request of the FBI” censored messages that featured Hunter Biden. The other day, it turned out that, at the insistence of all the same “men in black”, materials were “drowned” on the social network, at least somehow related to any of the sixty “forbidden” topics. Twitter (a social network banned in the Russian Federation) and YouTube work in a similar vein.

So what kind of laughs are there. It's time to wonder if Sleepy Joe wants to establish a direct dictatorship - but not the Democratic Party, but his own?

What about Trump and the Trumpists? Trump already at his own speech in the same Philadelphia a couple of days later called Biden an "enemy of the nation", breaking a storm of applause.

But the affairs of a successful businessman are not going very well, the main problem remains "theft of secret documents." How many papers were seized by the FBI in Mar-a-Lago is still unclear: until recently it was about three hundred documents, but just the other day there were reports that supposedly about 50 empty folders marked “secret” were also found on the estate. ”, the contents of which were not found and it is generally not clear what was in them. This is very reminiscent of that joke about three pigs with numbers 1, 2 and 4, but, most importantly, it shows that the topic of documents can be promoted until 2024 and after it too.

At the same time, Trump himself decided to urgently add new enemies to himself and began to clash with the leader of the Republican faction in Congress, McConnell. Trump himself accuses the congressman of indulging the Democrats, and his wife - of pro-Chinese lobbying, because her business (a logistics company) is tightly tied to trade with China.

It is clear that such behavior does not benefit either Trump himself or the Republicans as a whole. Donald becomes "toxic": he allows himself a tedious shocking, despite the fact that he will most likely not be able to run for the presidential election. It has been noticed that many of yesterday's supporters began to slowly distance themselves from Trump, at least in the information field: they clean up old records in his support and do not make new ones.

In turn, the ordinary voter, seeing the discord in the Republican ranks, is allegedly already beginning to lean in favor of the Democrats - at least, such are the results of opinion polls. Less than a month later, instead of speeches about the inevitability of the victory of the Republicans in the fall congressional elections, rumors spread about the more likely victory of the Democrats.

Here, of course, one should not forget either the manipulative nature of all these "opinion polls" or the intellectual level of the average American. The latter, as you know, is still the same, and it is quite possible to believe that massive propaganda managed to suppress the overdue dissatisfaction with Biden's policies.

But, on the other hand, on September 7, the film “My Son Hunter” should be released on the big screens, dedicated, as you might guess, to the adventures of the overgrown undergrowth Biden Jr. It is already clear that, in fact, the film will be a political pamphlet in the wrapper of a feature film “based on” files from that same laptop and, it seems, very well filmed. If the film is not "hacked" on the way to the viewer, its success may once again turn the arrow of popular adoration away from the Democrats.
Reporterin Yandex News
Reporterin Yandex Zen
4 comments
Information
Dear reader, to leave comments on the publication, you must sign in.